Trade talks between the US and China are continuing, Trump hopes to have a full deal before the election in 2020, if not the deal will be a tougher deal for China. Trump is using debt as his weapon, the debt load on the US and every country is harming the people and not benefitting the countries. Trump calls out the Fed again for not lowering the interest rates. The [DS] for impeachment has fallen apart, they know it but they are trying to use the whistleblower narrative to push the impeachment talks, this is failing. Trump and the patriots have flipped the narrative in the MSM and the DS and they are struggling to regain it. [JB], [HB], [BO] and [HRC] are not in the crosshairs. The truth is coming out and it doesn’t look good for the [DS] players. This was part of the plan, expose it all, this is the next wave. The patriots are continually dropping carpet bombs and the DS/MSM are trying on the defensive.

Trade Talks Back On: Here’s Why China Canceled Its Trip To Montana And Nebraska

Former Head Of Plunge Protection Team Says Fed Has To Buy More Debt We have lift off.

“Go across the world and you’ll see either very low interest rates, or negative rates. The President wants to be competitive with these other countries on this, but I don’t think he’ll fire Jay Powell (even if I should!).” We should always be paying less interest than others!

Trump and the patriots are in control, they played the DS and the MSM and used everything the DS was trying to do with this whistleblower to their advantage, Trump basically let the story evolve and once it did and the MSM took the ball and ran with he let them expose it all for them. He let the DS and the MSM do what they do best push propaganda and once it was out there they patriots flipped the entire story , the MSM and the DS took the bait, we will be breaking this down a little later in this report, welcome to the 2nd Wave, release the carpet bombs. but first we have learned that Ed Buck as one of 55 electors of the electoral college in california, trump soldier tweeted out the following

Ed Buck was one of 55 electors of the Electoral College of California.

Source: Certificate of Vote For President and Vice President of the United States of America 2016 (pg2) #EdBuck 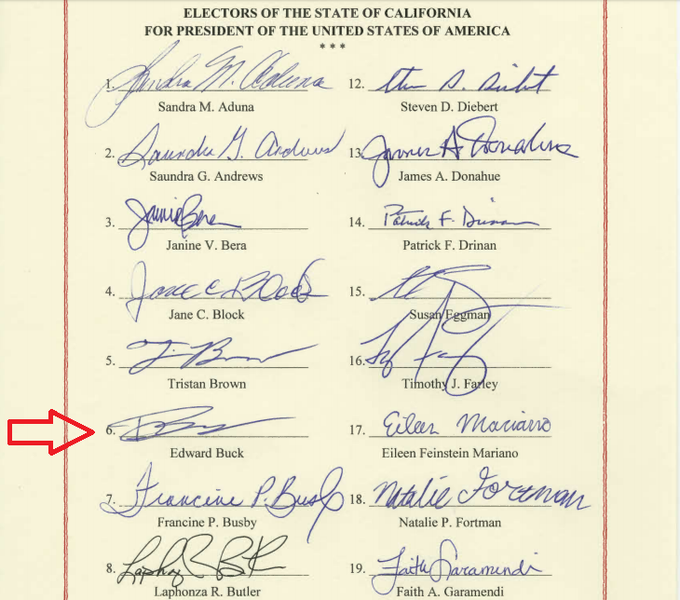 The DS has finally realized that they will can’t impeach trump, why because trump and the patriots setup a firewall, the senate was the key

‘No matter how soiled’: Schiff concedes Senate GOP will not throw Trump out of office 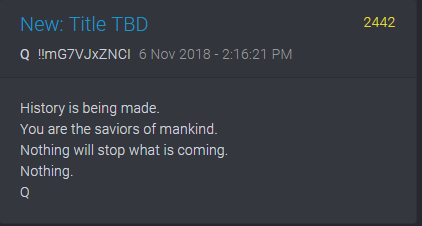 >>428
https://twitter.com/realDonaldTrump/status/1060256623439110146
While we cannot telegraph everything, for reasons all can understand, we do try in our own way to inform loyal Anons & Patriots.
What are the odds “thank you for your service” was posted less than 1 hour prior to POTUS re: Sessions “thank you for your service?”
Do you believe in coincidences?
How many coincidences before mathematically impossible?
THE SENATE WAS THE KEY.
Enjoy the show!
Q

Pelosi Calls For New Laws So Sitting Presidents Can Be Indicted

The DS has nothing , the carpet bombs are being dropped and they are hitting and more are coming, the DS will be bombarded

Rep Collins tweeted out the following

Friday FOIA dump confirms coup planned to take down @RealDonaldTrump, and McCabe used the FBI to pursue the collusion narrative.

Where are the other McCabe memos?

“It appears that some on the other side have got a problem with a lot of things that have gone on in law enforcement,” the Tennessee Democrat said. “I read all those FISA applications in the Carter Page and saw nothing wrong with any of them.”

“I’ll just leave it at the inspector general has written a report and we’ll see who’s right and we’ll see who’s wrong,” Ratcliffe said. “And I’m afraid, unfortunately, that the inspector general is going to find that folks on my side of the aisle are right that FISA procedures were abused and were not followed and will offer recommendations to correct that. But again, we’ll see.”

Now Trump and the patriots have just launched the 2nd Wave, each wave is going hit hard and make the DS and the MSM go on the defensive, the entire story about the whistleblower and ukraine has nothing to do with Trump but everything to do with obama, biden’s and clinton…

Biden is now on the defensive,

In December, 2015, as Joe Biden prepared to return to Ukraine, his aides braced for renewed scrutiny of Hunter’s relationship with Burisma. Amos Hochstein, the Obama Administration’s special envoy for energy policy, raised the matter with Biden, but did not go so far as to recommend that Hunter leave the board. As Hunter recalled, his father discussed Burisma with him just once: “Dad said, ‘I hope you know what you are doing,’ and I said, ‘I do.’ ”

He was VP, making diplomatic overtures & decisions, dropping the hammer on foreign leaders. If he didn’t try to identify his own conflicts of interest, that’s a big problem

Biden is in trouble and this is just the beginning, this was planned perfectly and the DS and the MSM are scrambling because they are caught in a story which they were going to use against Trump and now it has turned and OBama, Clinton and the Biden’s are in the crosshairs.

“Ukraine Foreign Minister disputes reports of any pressure from Trump. This conversation was long, friendly, and it touched on many questions.” @NBCNews Correct. If your looking for something done wrong, just look at the tape of Sleepy Joe. He is being protected by the Media!

Take a listen to what Trump said about Biden

IT WAS ALL A LIE! Ukrainian Foreign Minister Denies Trump Put Pressure on President During July Call (VIDEO)

And with this news another Fake News Media Cycle is Now Complete.

1.) Deep State leaks classified information to liberal press in attempt to ruin President Trump
2.) the press gladly take the information and blast it in a damning Special Report to take down Trump
3.) Every MSM outlet regurgitates the smear in screaming headlines
4.) The smear falls completely apart
5.) Within hours the MSM is backed into a corner and they start to backtrack, retract, clarify or update their smear
6.) The MSM is then exposed again for pushing fake news

The LameStream Media had a very bad week. They pushed numerous phony stories and got caught, especially The Failing New York Times, which has lost more money over the last 10 years than any paper in history, and The Amazon Washington Post. They are The Enemy of the People!

…The Fake News Media nowadays not only doesn’t check for the accuracy of the facts, they knowingly make up the facts. They even make up sources in order to protect their partners, the Democrats. It is so wrong, but they don’t even care anymore. They have gone totally CRAZY!!!!

Then trump lets everyone know that this is really about the bidens and their scandal, he tweeted out the following

“They’re trying to turn what was a Biden scandal into a Trump scandal.” @PeterSchweizer The problem is, “Trump” did nothing wrong!

Then trump brings it all together

“The real story involves Hunter Biden going around the world and collecting large payments from foreign governments and foreign oligarchs.” Peter Schweizer Laura Ingraham Hunter made a fortune in Ukraine and in China. He knew nothing about Energy, or anything else.

This is the real and only story! pic.twitter.com/4z8eOcm6PA

Now lets talk about the whistleblower, this is also falling apart and it just what we thought it was, the whistelblower has no information, no recording and never heard the conversation, predictable.

Trump then asks the question to make everyone think about spying, why would he do this?  He is getting everyone prepared for the Declas.

“It appears that an American spy in one of our intelligence agencies may have been spying on our own president. The complaint suggests that this intel agent was listening in on Trump’s conversation….

….with a foreign leader. Was this person officially asked to listen to the conversation or was he or she secretly listening in?” @GreggJarrett

USA has had 45 presidents, 44 w birth certificate on display in their presidential libraries.
Not Obama. No physical records at all.
Electronic files only.
Why?
Coincidence?
How does a man born in 20th c. not have a real birth certificate?
Only one way.
And only one reason.

How amazing, the State Health Director who verified copies of Obama’s “birth certificate” died in plane crash today. All others lived