Skip to content
Reports
September 9, 2020September 18, 2020 x22report
SPREAD THE WORD
Jobs are coming back, each month there are fewer people temporarily laid off. Job opening have surged which means that more jobs are going to come online. Mortgage demand is also surging, the economy is in an incredible recovery and the MSM/[DS] are trying to stop it, since they cannot say its BO economy they have now turned towards the Fed. The MSM/[DS] panic is off the charts, they are throwing everything they have and even repeating the same stories. This has failed before it started, the disinformation campaign does not work on the people, because once woken up you can see clearly. The patriots are closing in on the [DS] and something big is about to drop.

This puts our national security at risk. We will investigate:https://t.co/Z7npo3P6zv

And journalist Adam Housley backed this up later tonight.

Volunteer to be a Trump Election Poll Watcher. Sign up today!#MakeAmericaGreatAgainhttps://t.co/aYYsyWFDIw 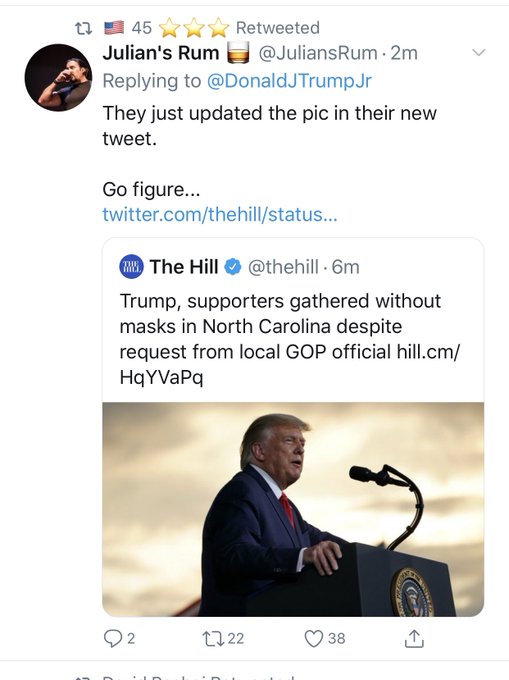 Donald Trump dropped 77 spots in the Forbes 400 this yearhttps://t.co/5MIbfCHaHU

But I thought that he was enriching his business by using the office of the President?

This from retired Maj. Gen. William Matz, who was present in France during the time in question: pic.twitter.com/XF1oVtcqbR

When President Donald Trump canceled a visit to the Aisne-Marne American Cemetery near Paris in 2018, he blamed rain for the last-minute decision, saying that “the helicopter couldn’t fly” and that the Secret Service wouldn’t drive him there. Neither claim was true.

“I’m not a big Trump supporter,” said the Norwegian parliamentarian who nominated Trump for the Nobel Prize. But facts are facts, he says. “The people who have received the Peace Prize in recent years have done much less than Donald Trump. For example, Barack Obama did nothing.” https://t.co/fpILiXs4q9

Saudi Arabia and Bahrain have agreed to open airspace to all flights east. (meaning, Israeli companies wand others ill be able to fly from Israel to Asia and significantly shorten the time)

Trump has sent another 20,000 U.S. troops to the Middle East, escalated US support for the war in Yemen, cut a crummy deal with the Taliban, and left us on the brink of war with Iran. Don’t fall for pre-election theatrics. https://t.co/IvSk0dwv4t

In his comments to Bob Woodward, Donald Trump reveals what an absolute abomination he is.

If he had a conscience or a soul, he would resign.

Tragically for us, he has neither.

If Woodward was so concerned Trump was keeping the American people in the dark about how “deadly” the coronavirus was, why didn’t HE inform the public by breaking that story on Page 1 of WaPo back in February? Why’d Woodward sit on it for 7 mos? B/c he was saving it for his book!

AstraZeneca Covid-19 vaccine study put on hold due to suspected adverse reaction in participant in the U.K.

South Dakota took a balanced approach to fighting #COVID19. Many in the media disagree with our respect for freedom. They’ll continue to attack us for the path that we’ve taken, but South Dakota is proof that freedom works, even in the face of a global pandemic. pic.twitter.com/1vKU3R6Rmk

We will be substantially LOWERING Medicare Premiums and Prescription Drug Prices, bringing them down to levels that were not thought possible!

John Brennan’s deranged anti-Trump book will be out.

One thought on “[DS] Is Repeating Everything They Tried In The Past, Which Failed, Panic Is Off The Charts – Episode 2272”