Ep 2722a – Biden Admin Blames Everything On Covid & Putin, People See The Truth Ep 2722b – [DS] Narrative Failure,Unsealing Of The First Several Indictments Will Bring About Unity
The people are seeing right through the lies, the Biden admin is blaming covid and Putin for the economic disaster, people now see it is the policies of the [CB]. The crisis is fake, the transition away from the [CB] is real. The [DS] has lost the narrative. The fake news/Biden admin wouldn’t have to respond the bio lab stories if they were in control, since they tried to spin the stories it shows the world they do not have control of the narrative. Durham is on the hunt and is ready to release more indictments, Barr confirms that Durham will release more. Trump doubles down on Xi going in Taiwan, there is a reason for this, information is going to be produced and it will be damaging to the [DS]. Patriots have the leverage and the [DS] is panicking.

President Biden recently said “it’s simply not true that my administration or policies are holding back domestic energy production.”

I figure the fact checkers likely won’t touch this one, so I did the homework.

This opposition to domestic energy production isn’t new. When Biden first took office, he moved to ban new oil and gas leases on federal land (a huge slice of US energy) via executive order.

The measure was eventually stopped by the courts. https://t.co/YYB892TBAi

Taken together, these early moves represent what climate activist Bill McKibben said “may well mark the official beginning of the end of the fossil-fuel era” arguing “they send a decisive signal about the end of one epoch and the beginning of another.” https://t.co/mOwnGo7bQq pic.twitter.com/eaMJ9PUfrf

All of these federal efforts came with a clear goal in mind: sending a signal that the days of fossil fuels would be ending soon.

Again, once upon a time, the corporate press was comfortable admitting this was the goal:https://t.co/IRkBmQHjTS

And it wasn’t just Biden acting on his own.

As @SaysSimonson wrote about for @FreeBeacon, Dems in Congress have pushed to restrict domestic energy production even as prices have climbed:https://t.co/1IePRV4NbW

And there were numerous hearings where Democrats have demonized the oil and gas industry in colorful but seriously dubious ways, making the industry’s standing on that side of the aisle clear. pic.twitter.com/cqwalOqdnN

Now, to be clear, the impacts of some of these efforts have been overblown.

Despite trying to ban new drilling on federal lands, lots of plans have moved forward to do so – more than under President Trump’s first year (largely b/c of Obama-era rules), but fewer than last year. pic.twitter.com/smVuE47qXc

But it’s intellectually disingenuous for President Biden to pretend that he and his party haven’t taken action to make domestic energy production more difficult and, as a result, have made energy more expensive.

They’ve done a lot with the explicit goal of doing just that.

Increased costs have always been a good-faith concern about climate efforts among lots of people, left, right and center.

Biden and his team ignored those warnings and helped make the bed they find themselves laying.

Rather than admit that, now they’re trying to memoryhole it. And 62% of Americans believe Putin would not have invaded if President Trump were still in office. Throughout Joe Biden’s 2020 presidential campaign, he pledged to tackle America’s student debt crisis by reducing the cost of attending college and canceling up to $10,000 of debt per borrower.

However, despite these failures, one group has benefited substantially from the Biden administration’s student loan policies: nonprofit workers, the largest group of which is those employed by federal, state, or local governments.

While tens of millions of other Americans remain burdened with massive student loan debts, government and other nonprofit workers have enjoyed substantial amounts of student debt forgiveness, and at a rate we’ve never seen before, thanks to a combination of policies most voters know very little about.

.@DuckDuckGo, contrary to its implicit promises to the contrary, is now in the censorship business. Are there any search engines that respect users? https://t.co/uUvzKhI5YQ

Remember when Obama bombed a Doctors Without Borders hospital, even though it was on the no strike list, and killed 42 people? https://t.co/49n7VeG8qT https://t.co/5eJfLJXy4X pic.twitter.com/R8vmMkSRxt

EU parliament votes to sanction Hungary and Poland in midst of Ukraine war — despite both countries welcoming 1.6 million refugees in a fortnight

State Dept Claims “U.S. Does Not Have Chemical and Biological Weapons Labs in Ukraine,” the Ukraine Government Does 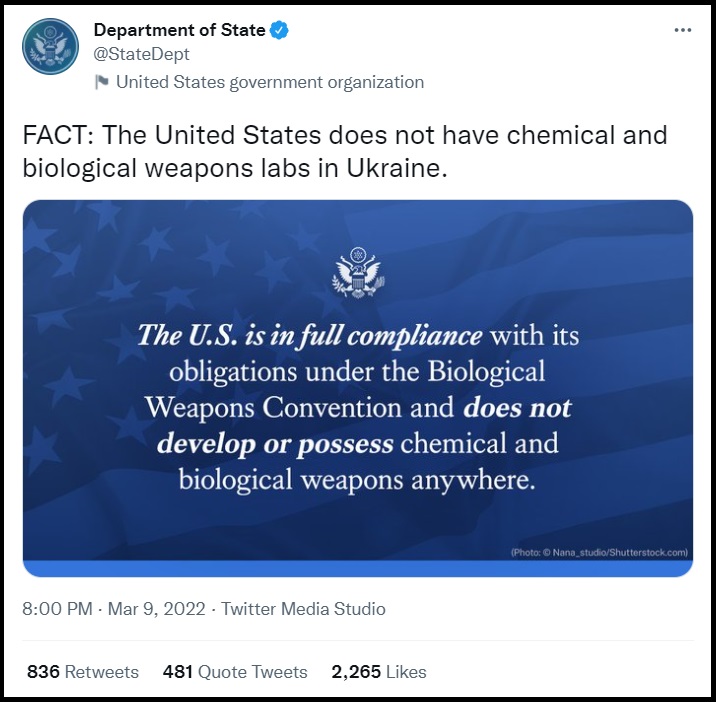 Now that Russia has made these false claims, and China has seemingly endorsed this propaganda, we should all be on the lookout for Russia to possibly use chemical or biological weapons in Ukraine, or to create a false flag operation using them. It’s a clear pattern.

we are part of the Biological weapons convention which stemmed from the geneva convention, as are most of the world.

>Decide for yourself (be free from outside opinion).
>Decide for yourself (be objective in your conclusions).
>Decide for yourself (be true in your own beliefs).
>Decide for yourself (be open to following the facts).
>Decide for yourself (be strong in defending your beliefs).
>Decide for yourself (be resistant to blindly accepting fact-less statements).
>Decide for yourself (be free)
Those who attack you.
Those who mock you.
Those who cull you.
Those who control you.
Those who label you.
Do they represent you?
Or, do they represent themselves (in some form)?
Mental Enslavement.
The Great Awakening (‘Freedom of Thought’), was designed and created not only as a backchannel to the public (away from the longstanding ‘mind’ control of the corrupt & heavily biased media) to endure future events through transparency and regeneration of individual thought (breaking the chains of ‘group-think’), but, more importantly, aid in the construction of a vehicle (a ‘ship’) that provides the scattered (‘free thinkers’) with a ‘starter’ new social-networking platform which allows for freedom of thought, expression, and patriotism or national pride (the feeling of love, devotion and sense of attachment to a homeland and alliance with other citizens who share the same sentiment).
When ‘non-dogmatic’ information becomes FREE & TRANSPARENT it becomes a threat to those who attempt to control the narrative and/or the stable.
When you are awake, you stand on the outside of the stable (‘group-think’ collective), and have ‘free thought’.
“Free thought” is a philosophical viewpoint which holds that positions regarding truth should be formed on the basis of logic, reason, and empiricism, rather than authority, tradition, revelation, or dogma.
When you are awake, you are able to clearly see.
The choice is yours, and yours alone.
Trust and put faith in yourself.
You are not alone and you are not in the minority.
Difficult truths will soon see the light of day.
WWG1WGA!!!
Q

4 thoughts on “[DS] Narrative Failure,Unsealing Of The First Several Indictments Will Bring About Unity – Ep. 2722”