Skip to content
Reports
December 4, 2020December 6, 2020 x22report
SPREAD THE WORD
The economy continues to improve even though there are many Gov and Mayors not allowing the states to open up. The unemployment rate came down to 6.7%. [NP] admits that she held back and did not help the people during this time. The [CB]/[DS] begin panic, they are forcing the reset, but is anyone listening. The [DS]/MSM are in trouble, the evidence is pouring out and nothing can stop this. People are seeing it, they are now experiencing [e] fraud for the first time. [DS] panics, sends a message, GA is in the crosshairs. Everything is about to change, the truth is about to come out. The tide is turning. Ep 2345b – [DS] Panics, Sends Message, Everything Is About To Change Nancy Pelosi admits it was her “decision” to block coronavirus relief for monthshttps://t.co/atHB2xxXCn pic.twitter.com/wGMEta4JCc

PELOSI has held out for a big deal for 6 or so months. She said this morning that now that BIDEN is president, she is willing to do a smaller deal.

Joe Biden is asked about his disagreements with Kamala Harris on certain issues:

“Like I told Barack, if I reach something where there’s a fundamental disagreement we have based on a moral principle, I’ll develop some disease and say I have to resign.” pic.twitter.com/SLcvrwaPCA

I’m officially asking @JoeBiden to explain what he meant by this. pic.twitter.com/nfHjgQZunc 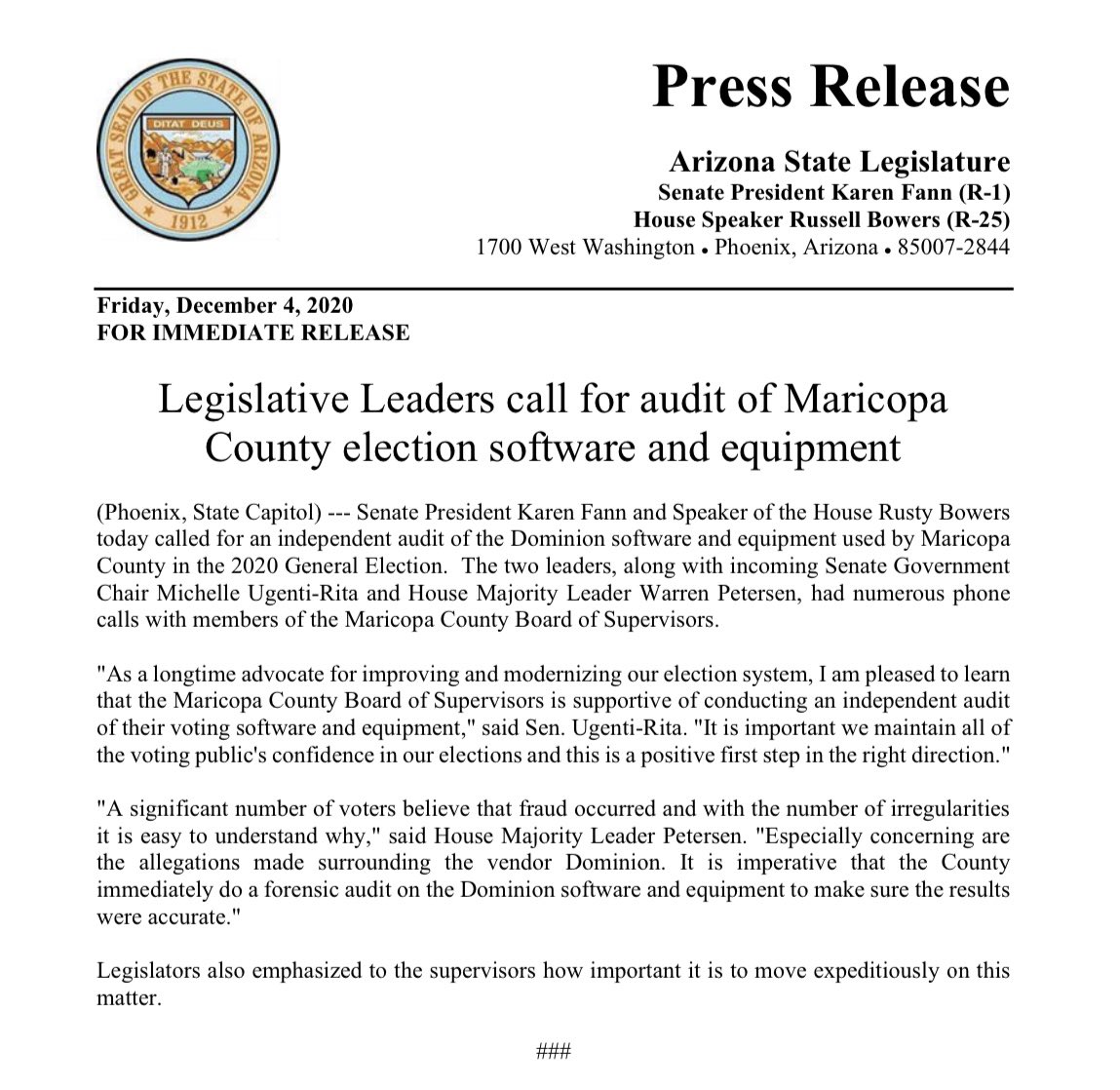 Governor @dougducey of Arizona hired a lawyer today. Wouldn’t allowing a strong check of ballots, which would be easier and so much better for our Country, be easier on him and the great State of Arizona?

Video footage from Georgia shows suitcases filled with ballots pulled from under a table *AFTER* supervisors told poll workers to leave room and 4 people stayed behind to keep counting votes.🔻 pic.twitter.com/yo1K2N550u

“Legitimate ballots do not come packed in a suitcase” –

Video footage shows everyone was cleared out, including Republican observers, but 4 people stay behind, pull suitcases filled with ballots from under a table, & continue to count ballots in private from around 1030PM until 1AM. pic.twitter.com/BSVnYZQ36I

“This video just appeared last night. How could it have been ‘debunked’?”

WATCH a Dem. Karen get *SHUT DOWN* for claiming the State Farm video was *DEBUNKED* before anyone had ever seen it.

This is the poster-child for Americans in election fraud denial right now.

Cyber-security expert, Russ Ramsland, says Biden outperformed by about 5% across the country where Dominion Voting Systems were used.

In Georgia, this Dominion Voting System “boost” adds up to around 123,000 votes.🔻 pic.twitter.com/6hIypL1Xwb

“We have a witness that estimates about 6,000 ballots can fit in each suitcase.”

There are 9 witness affidavits from recount workers which testify to an unusual batch with “pristine sheets, no creases, different texture, perfect bubbles, all for Biden.”🔻 https://t.co/eFn4zkyrIZ

Then the Leadstories came out with a story debunking all of this, The election Wizard debunked the debunking story

Part of the information used by LeadStories to “debunk” #SuitCaseGate contradicts national and local reporting from Election Night.

There was, in fact, a media announcement from Fulton County saying the counting would stop. 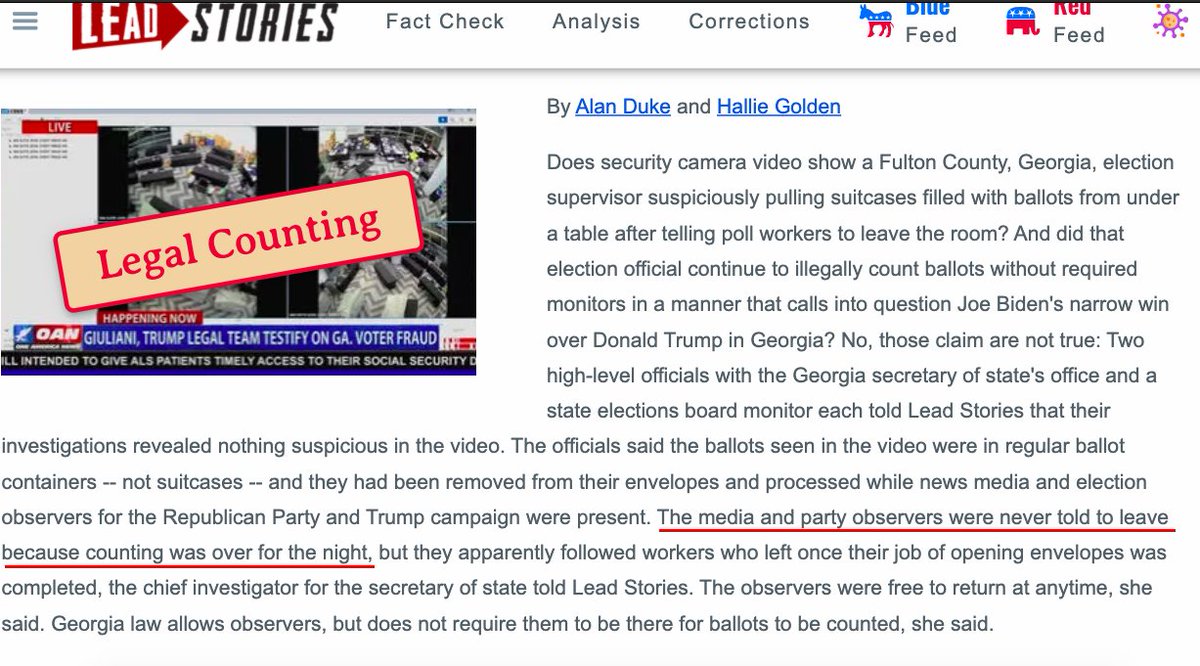 Fulton County officials told the media, apparently without explanation, that counting would stop at 10:30 pm on Election Night. 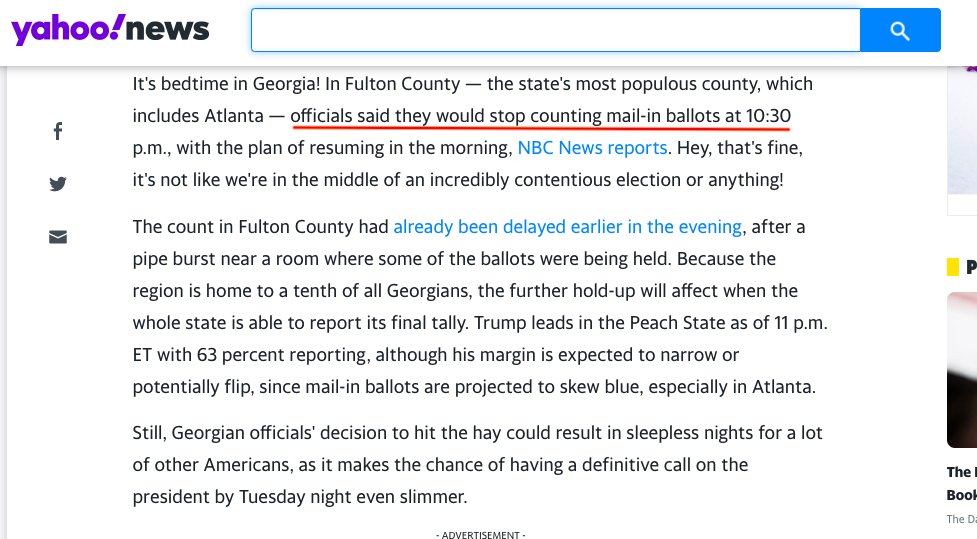 But counting did not stop. Five workers and a state observer reportedly stayed behind.

Whether partisan observers and the media misinterpreted the announcement as a directive to leave is debatable. But officials did tell the media counting was over…and then continued counting. pic.twitter.com/DXzbvEHhnz

Biden wins 98% of one batch of 23,487 votes in Georgia during alleged SuitCaseGate 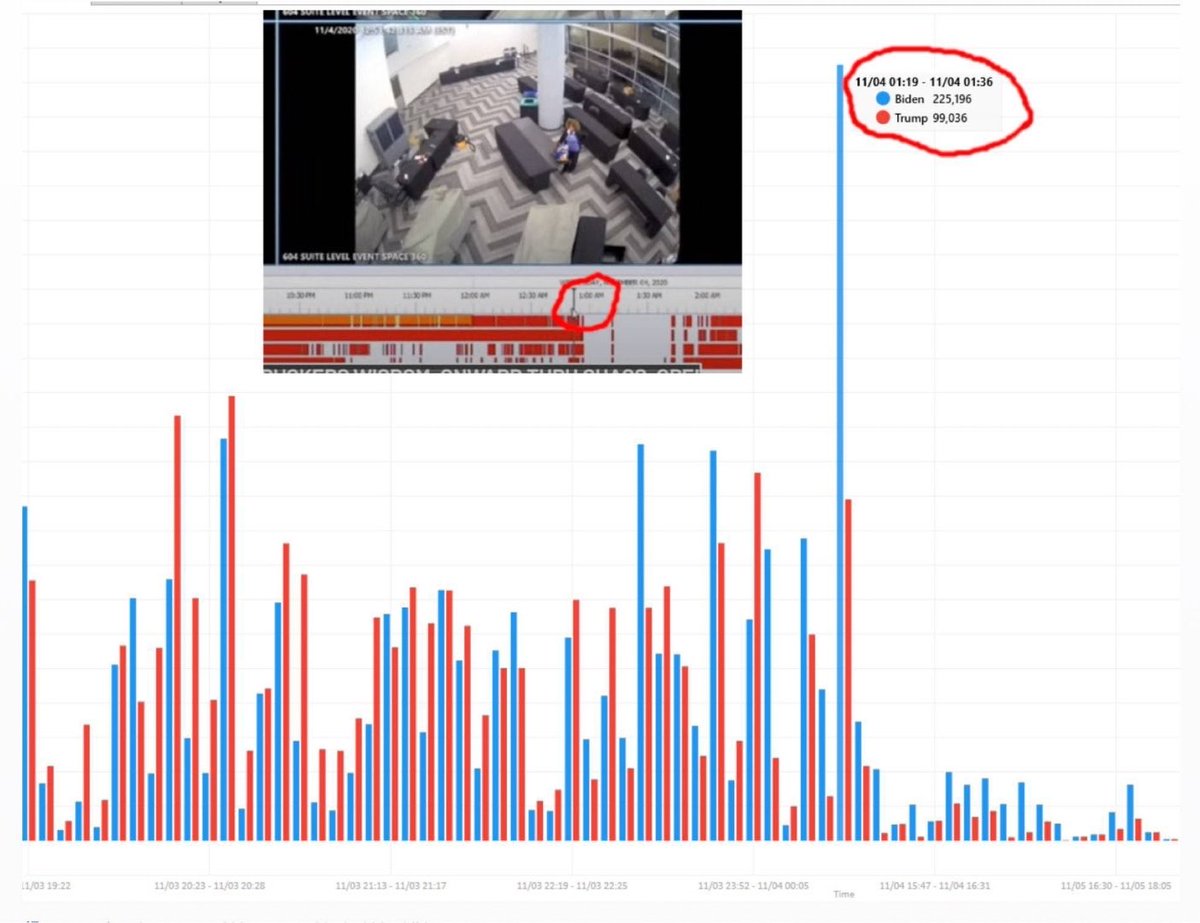 If I were the GOV of Georgia after hearing his citizens present testimony today I would stop all engines & decertify the election, conduct a complete and detailed audit of everything (not a fake recount) of ballots as well as the dominion machines immediately. But that’s just me.

The “Bank Heist tape changes the result in Georgia.

The State Legislature has no choice but to assume its powers under the US Constitution, article II (1) [2] and select Trump electors.

More important it seems th have the courage to do so.

The best way to insure a @KLoeffler and @sendavidperdue VICTORY is to allow signature checks in the Presidential race, which will insure a Georgia Presidential win (very few votes are needed, many will be found). Spirits will soar and everyone will rush out and VOTE! @BrianKempGA

Glad to see A Promised Land in such good company. https://t.co/u9TJ83ZPyn 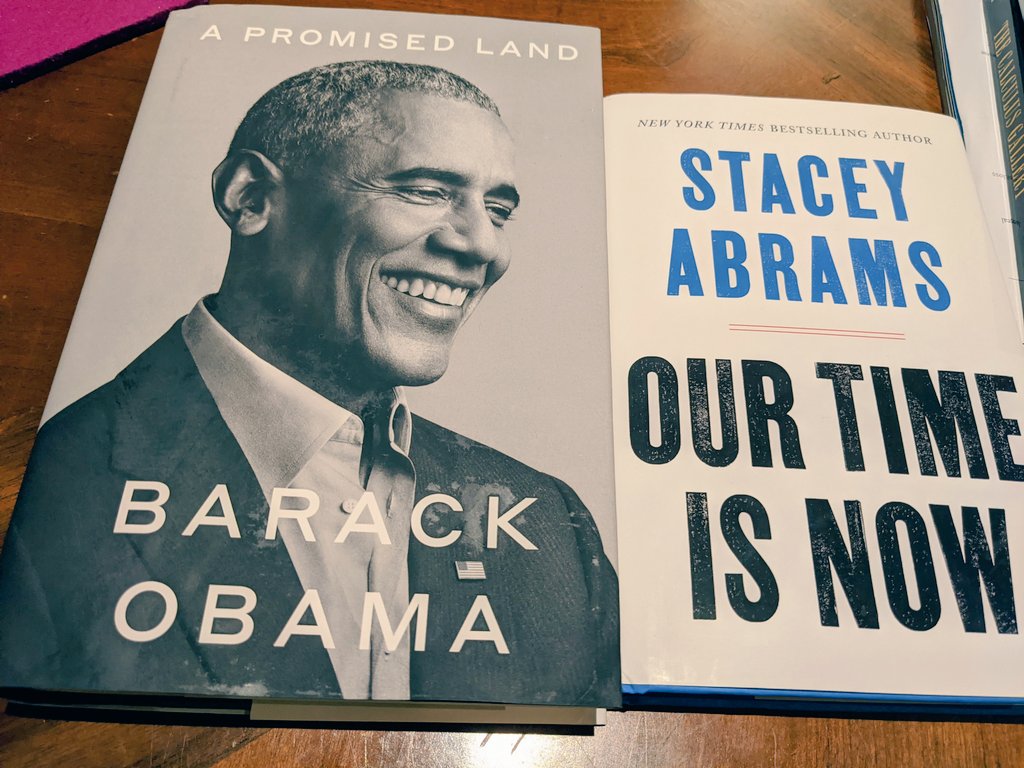 Out in PA the entire manipulation of the election is starting to fall apart.

The Republicans in the PA legislature have no explanation for why there are than 700,000 mail in ballots in the vote but no record if they were returned.

Why covering up for Dem crimes?

Now what is very interesting the call for Barr to do something is not coming from Trump himself, it is coming from many others, optics are important

Fair questions for AG Bill Barr:
1. Did you investigate voting fraud?
2. What did you do?
3. What did you find?
4. How much time did you spend?
5. Were experts involved?
6. How many Dominion machines analyzed?
7. How many poll watchers interviewed?

We foot bill. We need answers.

There’s widespread evidence of fraud because people haven’t done their jobs. Durham and Barr will deserve a big notation in history when it’s written about the rise and fall of the U.S. if they don’t clean up this mess. Clean up the fraud. DO YOUR JOBS & save this country. pic.twitter.com/RSRctcfQX2

Apportionment data from the 2020 census, which determines how many House seats each state will get for the next decade, may not be delivered until after President-elect Biden is inaugurated, according to documents released by the House Oversight Committeehttps://t.co/NNCnPrRgyn

DNI Ratcliffe tells @CBS_Herridge that China is using blackmail, bribery and covert influence to target members of Congress and make sure “only laws that are favorable to China are passed” pic.twitter.com/3hQ23hXvtF

Claim: “Kevin did not knowingly lie about the relationship between Individual #1 [Carter Page] and the other gov’t agency [CIA]” 🤔 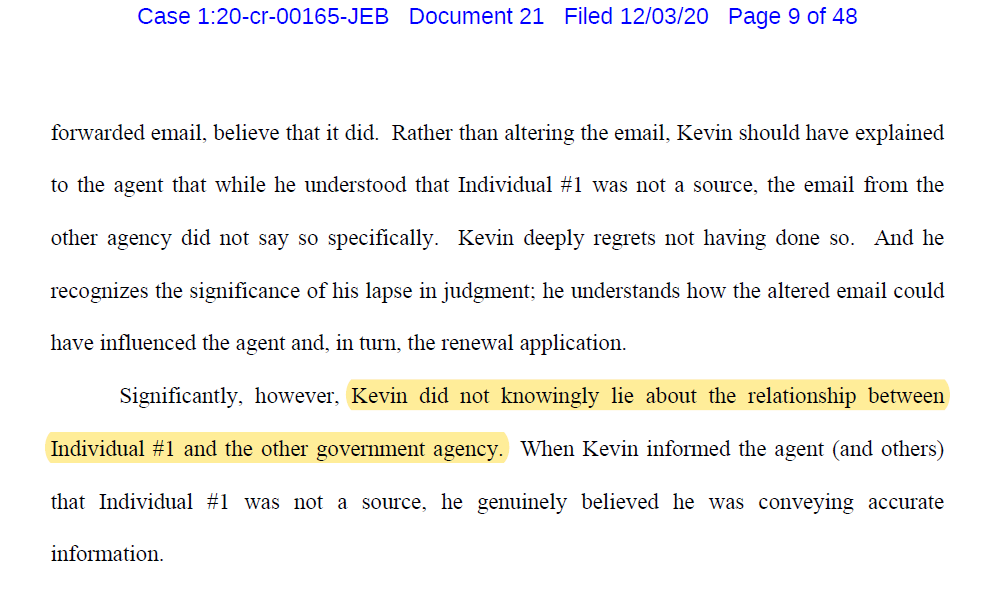 In support of Clinesmith –

A letter from a member of Team Muller (Special Counsel):

We believe this is Andrew Weissmann. 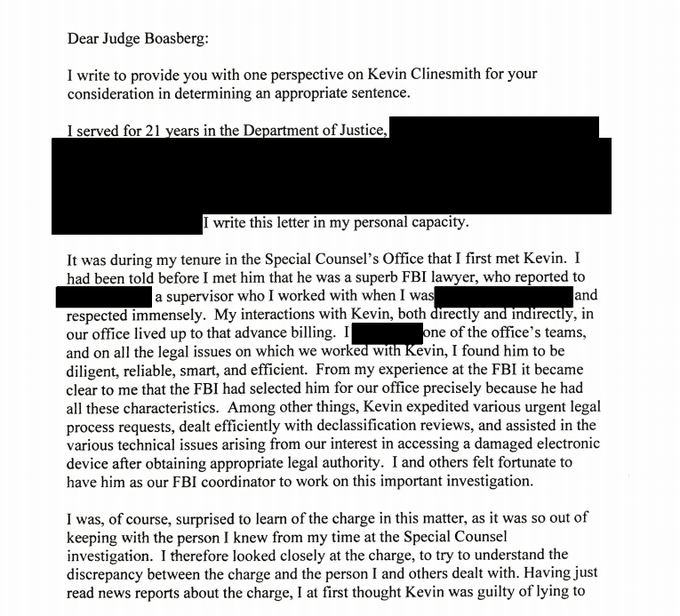 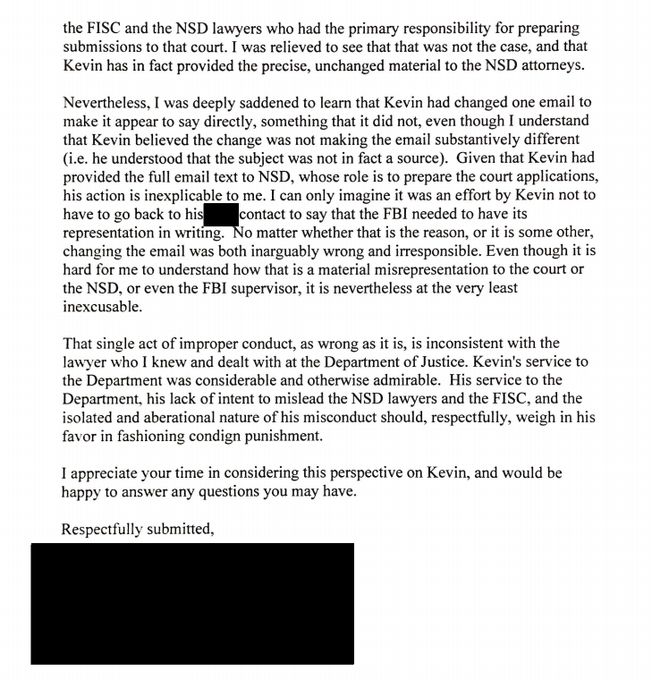 Very sadly for our Nation, it looks like Senator @JimInhofe will not be putting the Section 230 termination clause into the Defense Bill. So bad for our National Security and Election Integrity. Last chance to ever get it done. I will VETO!

DESPERATE
You couldn’t get me to take it for 1.5Billion dollars. pic.twitter.com/zMjtPdVFyb