The patriots are now in full control of the economy, the markets hit an all time new high, the house starts and permits rebound and the Trump confirmed that the Fed is not done with cutting rates and pushing stimulus. He is following the plan of Jackson, it’s time to return the economy to the people. The [DS] continued with their fake impeachment, this time there were two who actually sat in on the call, but the phone transcript was released and they not much to say. AS and AV tried to protect the WB identity but in the process actually projected to the people that they know who it is. The patriots are setting up the narrative that the corruption was in Ukraine but it was BO, JB, HRC and JB. Q drops more bread and confirms all of this .

NASDAQ UP 27% THIS YEAR ALONE!

On a YoY basis, both starts and permits surged to new multi-year high growth rates… 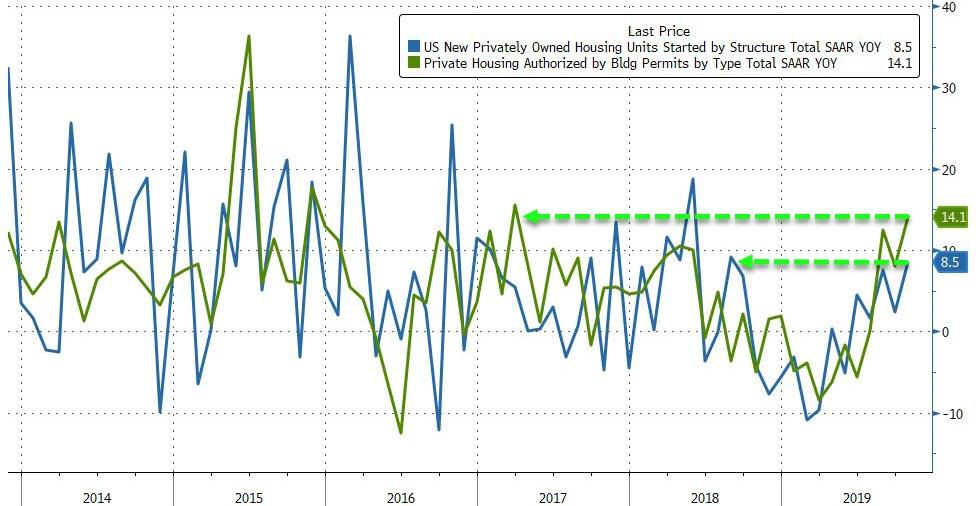 At my meeting with Jay Powell this morning, I protested fact that our Fed Rate is set too high relative to the interest rates of other competitor countries. In fact, our rates should be lower than all others (we are the U.S.). Too strong a Dollar hurting manufacturers & growth!

The [DS] continued with their fake impeachment hearings today, they had Jennifer Williams and Alexander Vindam, both heard the phone call, they did not reveal a crime, or bribery, they revealed that the call was ok, nothing happened, why, because the phone transcript was released and the American people can read it themselves and anything they say now is just their opinion, but what came out of all this is much more important, its how the the patriots are bending the hearings to do the impossible, we will be talking about this a little later in this report but first Q has told us many times that the C_A has infiltrated government and the MSM, Paul Sperry tweeted out the following

Another Obama agent posing as a journalist spinning impeachment for Dems is Samantha Vinograd — CNN calls her a “National Security Analyst,” but what CNN doesn’t tell you is that she worked in the Obama White House as an Obama NSC adviser pic.twitter.com/Og6Eh8ZLII

Now we know the [DS] is still pushing their fake impeachment hearings, it is not going well for them, both Vindman and Williams once again said nothing to show that the President committed a crime or as Pelosi and Schiff are pushing offered a bribe

But what is very interesting is that the republicans are carefully bending the hearings in a different direction, if you notice they continually bring up Joe Biden, Burisma, Hunter Biden and they ask those if they knew anything about since many of these people should know everything is going on in Ukraine,

Take a listen to Nunes

The Republicans are now setting up all these people, the patriots have it all, they know they are not telling the truth. They are continaully pushing the corruption of the Bidens out into the public realm, they are using the MSM against them.

Now Vindman’s boss Morrison was very concerned about him not going to him with his concerns about the July 25th Call , Sean Davis tweeted out

Here’s what Tim Morrison, Vindman’s direct superior, testified about Vindman’s lack of respect for the chain of command and Vindman’s failure to report to his boss concerns about the appropriateness of the July 25 call.

Vindman is not being truthful about his behavior. pic.twitter.com/cmiWeS4Xzk

Here is Jim Jordan questioning him on why he did not go to his boss first.  Take a listen

BREAKING: NSC officials attempted to remove Alex Vindman due to security concerns but were blocked by an Obama holdover, an official in the White House who still controls human resource management inside the NSC, an African-American woman closely tied to the Obama family

BREAKING: NSC officials restricted access to foreign call records out of concern they could be leaked by Vindman, who opposed Trump’s foreign policy and who had been accused of leaking in prior instances

Nunes: Did you discuss the July 25 call or July 26 call with anyone outside the White House?

Vindman: Yes. George Kent, and someone I’m not going to name who works in the intelligence community.

Schiff just told Vindman not to answer the question.

Vindman is the leaker.

Byron York responds to Schiff response that the whistleblower has ‘a statutory right to anonymity.

Chairman Schiff just said again, this time in public hearing, that the whistleblower has ‘a statutory right to anonymity.’ That is simply not correct. From ICWPA: https://t.co/5GfR5cBtPb pic.twitter.com/Pduxp8Av7V 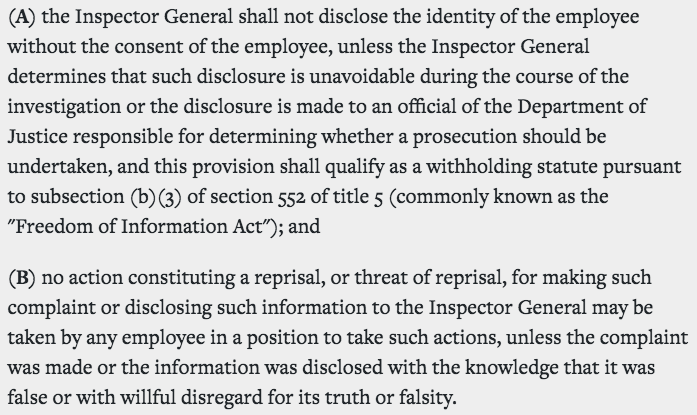 So if nobody knows who the WB is, how then could Schiff or Vindman know exactly when to cut off the question about the WB, this would be impossible.

“I’ve never had any contact with the president of the United States” – Lt. Col. Vindman

Vindman said he spoke to “a half dozen or more officials” about the July 25 call.

Interestingly, that is the exact same phrase used by the anti-Trump whistleblower to characterize the number of officials who leaked to him.

Now we know that the DS have been trying to use different words that resonate with the American public, they found a word it’s bribery, the problem is that during the testimony of these people the word bribery was not used, Rep Ratcliffe, looked through 3500 pages of testimony and the word bribery does not show up in all those pages, the only time the word bribery shows up is when they were talking about Biden, Take a listen

Now the MSM, they are trying to make the case that the President is using unauthorized diplomatic channels, foreign policy is off,

Now we know the IG FISA report is about to be released and we are now getting more information of when it might be released.

Memorandum from the President’s Physician pic.twitter.com/yzkjqCBBHc 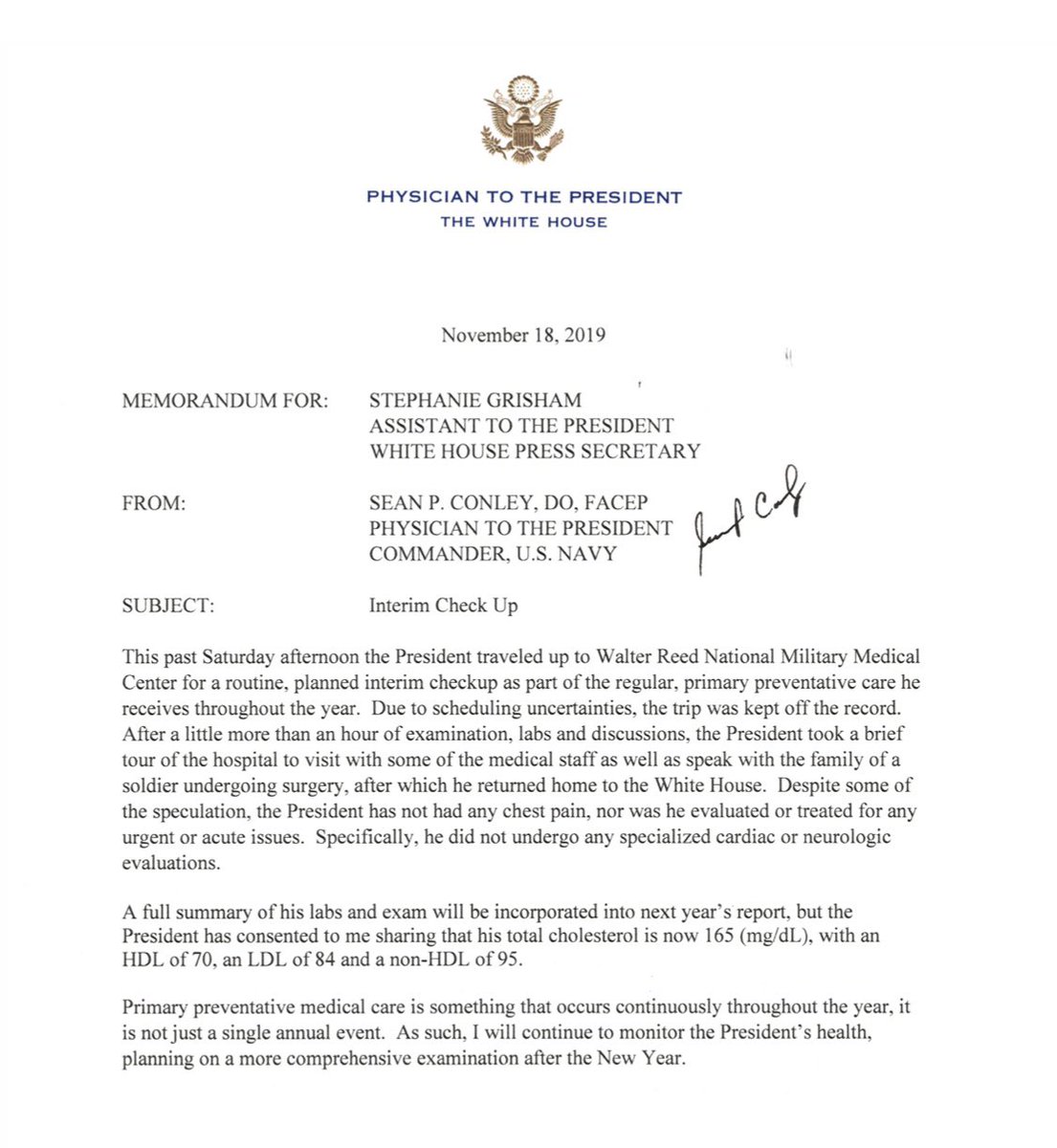 Lets talk about what is happening with JE

The question is were they working with others, then we have the following

Epstein Accuser Says Ghislaine Maxwell Threatened Her: ‘There’s so Many Ways to Die’

Trump recently pardoned “Army 1st Lt. Clint Lorance, one of two U.S. Army officers granted clemency  by  Trump, was released from prison in Kansas on Friday night & reunited w/ family members. the msm and others are freaking out, but lets look at the facts, Julian’s Rum tweeted out the following