Trump is now restoring the steel and aluminum tariffs on Brazil and Argentina. Brazil has signed economic deals with China and Trump is now countering these.Trump economy is doing better than ever, the transition is coming along and Trump let us know that the next economic system is going to be far greater than anyone understands. The [DS] begins the fake impeachment hearings, Trump is not going to send lawyers to the fake impeachment hearing. The Ukrainian President once again says no quid pro quo, case closed. Nunes says get ready for phase 2, but the phase we need to watch is phase 3, a traitor’s justice. The armed forces let us know that this is the calm before the storm, hold position, it’s coming.

Brazil and Argentina have been presiding over a massive devaluation of their currencies. which is not good for our farmers. Therefore, effective immediately, I will restore the Tariffs on all Steel & Aluminum that is shipped into the U.S. from those countries. The Federal….

…..Reserve should likewise act so that countries, of which there are many, no longer take advantage of our strong dollar by further devaluing their currencies. This makes it very hard for our manufactures & farmers to fairly export their goods. Lower Rates & Loosen – Fed!

U.S. Markets are up as much as 21% since the announcement of Tariffs on 3/1/2018 – and the U.S. is taking in massive amounts of money (and giving some to our farmers, who have been targeted by China)!

Then Trump sends us a message about what is coming.

“The United States has outperformed the rest of the world in an eye popping fashion. I don’t think we’ve seen numbers like that.” Mohamed El-Erian, Allianz Chief Economic Adviser. But despite this there is tremendous potential for growth, far greater than most have understood!

The [DS] is panicking, The [DS] players do not want anyone looking at Ukraine, Sen John Kennedy was on NBC and he continued to say Ukraine meddled in the 2016 election, Axios tweeted the following

Sen. John Kennedy argued in a testy exchange with NBC’s Chuck Todd that “both Russia and Ukraine meddled in the 2016 election,” claiming without evidence that former Ukrainian President Petro Poroshenko “actively worked” for Hillary Clinton. https://t.co/u4jrGm73HM

Sen. Kennedy, why are you parroting Russian propaganda that U.S. intelligence officials tell us are designed to divide our country? Did you miss the briefing that day? https://t.co/mzmMYHTlSp

Then we find out why Biden was hired, the truth comes out

Former Polish President and Burisma Board Member: Hunter Biden Was Hired Because of His Father’s Political Influence

Now we know the [DS] is pushing forward with fake impeachment, as the [DS]/Dems prepare the President of Ukraine once again comes out and says that the president did nothing wrong, Trump tweeted out the following

Breaking News: The President of Ukraine has just again announced that President Trump has done nothing wrong with respect to Ukraine and our interactions or calls. If the Radical Left Democrats were sane, which they are not, it would be case over!

“The Democrats don’t have any evidence, but they are still going to do it anyway. That’s the sham that’s going on here.” @jasoninthehouse Chaffetz

As we reported yesterday, Nadler has now invited Trump and his lawyers to attend the hearing, of course after the fact,

So now the coup cabal invites @RealDonaldTrump lawyers to the hearings AFTER the witnesses have testified. Alice in Wonderland Impeachment. #StoptheCoup https://t.co/ZT6j14u8bO

The Do Nothing Democrats get 3 Constitutional lawyers for their Impeachment hoax (they will need them!), the Republicans get one. Oh, that sounds fair!

Now the MSM is trying to make it seem like RG was taking payment, making business deals with Ukraine while getting the info on HB and JB, but once again the MSM is pushing fake news, RG tweeted the following

I have not taken a penny for representing my friend, President Trump. I am outraged that @SteveHiltonx reported that I was trying to pursue private business deals in Ukraine to “enrich” myself, when in reality I have made ZERO in Ukraine! Very lazy reporting!

Since representing Trump I have considered and turned down all deals in Ukraine, even those not presenting a conflict.

Lawyers tell me @SteveHiltonx is a wild card and I should sue him for libel.

He recklessly disregarded the truth!

If it wasn’t for me, @SteveHiltonx wouldn’t even be covering Burisma. He sure didn’t cover it for the THREE YEARS it was in front of his face. He should apologize for his maliciousness and thank me for the story!

Trump lays it all out in this tweet, letting the country know what we are up against, and who are the corrupt.

“When the law enforcers turn out to be the law breakers, then we have totally upended the rule of law. Nobody is safe and everybody is in trouble. Our system of government is under attack.” @GovMikeHuckabee

Now Nunes said something very interesting about the fake impeachment, that phase two the impeachment circus begins, Sara Carter tweets out the following

Nunes: “Phase Two” Of The Impeachment Circus Begins This Week

“Well we now know that this coming week Jerry Nadler is gonna start phase two of the circus,” said Nunes.https://t.co/tIUlqKBoKT?
utm_source=twitter&utm_medium=social&utm_campaign=social-pug via @SaraCarterDC

There is no STEP FIVE.
-END-
Q

Now the [DS] players are coming out of the wood work to present their case and to make it look like they have been tricked, or they were the victim, first we have Christopher Steele making the rounds with this book saying that he was tricked, now we Lisa Page, we will see many more come out to tell their story, the problem, you can’t be the victim when their is evidence, document saying the opposite.

Page: “This man cannot be president”

Page: “I want to believe the path you threw out in Andy’s office—that there’s no way he gets elected—but I’m afraid we can’t take the risk. It’s like an insurance policy in the unlikely event you die before you’re 40.”

Page: [Trump’s] not ever going to become president, right? Right?!”

When Lisa Page, the lover of Peter Strzok, talks about being “crushed”, and how innocent she is, ask her to read Peter’s “Insurance Policy” text, to her, just in case Hillary loses. Also, why were the lovers text messages scrubbed after he left Mueller. Where are they Lisa?

Social media is trying to control the election results, we know that Twitter decided not to run political ads but they use other techniques to make sure you see one candidate feed and not another, this is called shadow banning, now we learn that google and youtube have taken down more than 300 Trump political ads

60 Minutes correspondent Lesley Stahl asked Wojcicki, “Have you taken down any of President Trump’s ads at all?” YouTube’s CEO responded, “There are ads of President Trump that were not approved to run on Google or YouTube.” When pressed for an example, Wojcicki added, “Well, they’re available in our transparency report.”

60 Minutes reviewed the archive to learn more about President Trump’s problematic political ads. We found that over 300 video ads were taken down by Google and YouTube, mostly over the summer, for violating company policy. But the archive doesn’t detail what policy was violated. Was it copyright violation? A lie or extreme inaccuracy? Faulty grammar? Bad punctuation? It’s unclear. The ads determined to be offending are not available to be screened. We found very little transparency in the transparency report.

In the 3 decades before my election, NATO spending declined by two-thirds, and only 3 other NATO members were meeting their financial obligations. Since I took office, the number of NATO allies fulfilling their obligations more than DOUBLED, and NATO spending increased by $130B!

“The Spirit of America” is shining in the @WhiteHouse! I am delighted to share this beautiful exhibit of patriotism for all to see, and excited for everyone to experience the beauty of the #Christmas season! pic.twitter.com/qGxxl9qBrd

The calm before the storm ⚡️

A team of Rangers silently hold their position before executing a platoon raid. 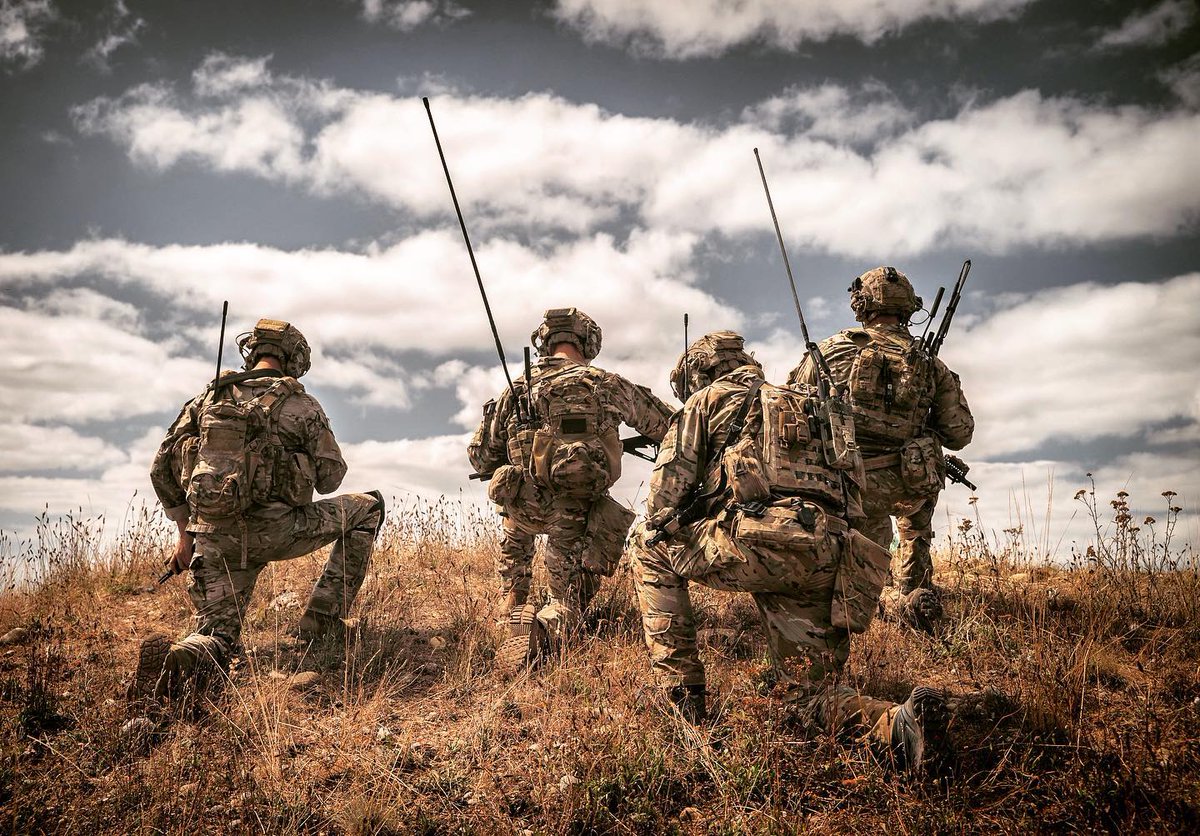 Some have also noticed this on the soldier’s pack.#QAnon pic.twitter.com/5LXktsjeId