The [DS]/[CB] just showed the American people their true agenda, destroy the economy. During the debate JB brought up the economy and blamed Trump for destroying it. This failed, people see improvement as the economy opened. The [DS] believes the debates are going to expose Trump, its the other way around. The patriots are using the debates to bring the corruption to a larger audience, to have people think and question. While all of this is happening JC is being questioned by the Senate Judiciary Committee. This is not about have JC tell the truth, this is about getting him on record under oath. This will be used against him later on. The patriots are in total control, Trump mission will to break Biden during the debates, enjoy the show.

NYC Hammered By 40% Bankruptcy Surge, Braces For Next Wave

“When they close, we don’t just lose our beloved Main Street businesses. We lose jobs, tax revenue and the economic backbone of our city,” Stringer said.

WALLACE: “You propose $2 trillion in green jobs, you talk about new limits, not abolishing, but new limits on fracking. Ending the use of fossil fuels to generate electricity by 2035 and zero net emission of greenhouse gases by 2050. The President says a lot of these things would tank the economy and cost millions of jobs.” BIDEN: “He is absolutely wrong.”

FACT: Biden’s energy plan would cost trillions of dollars and hundreds of thousands of jobs.

FACT: Joe Biden has embraced the Green New Deal in all but name.

For some perspective on that ‘rebound’, this is the same level of employment as at Dec 2014…

Maybe he forgot the Paycheck Protection Program – the centerpiece of President Trump’s COVID relief efforts that delivered over $500 billion to small businesses and saved 51 million jobs. On top of that, President Trump’s record tax cuts and regulatory relief created the best economy in history before the pandemic struck.

“The Trump Administration actually added around 443,000 manufacturing jobs from January 2017 to this February, before the pandemic hit.” pic.twitter.com/ynhCld0KXQ

Judge #Sullivan is asking parties to submit briefs by October 7 indicating he will likely not rule on the #Flynn case until sometime after that date. See below order: pic.twitter.com/ayvG2S1gmz

It’s debate night, so I’ve got my earpiece and performance enhancers ready. pic.twitter.com/EhOiWdjh1b

You should be ashamed of yourself. All you ever do is lie to Hispanics and impose your garbage leftist ideology on our communities.pic.twitter.com/3gWKFbw6mm https://t.co/22XM32TNh9 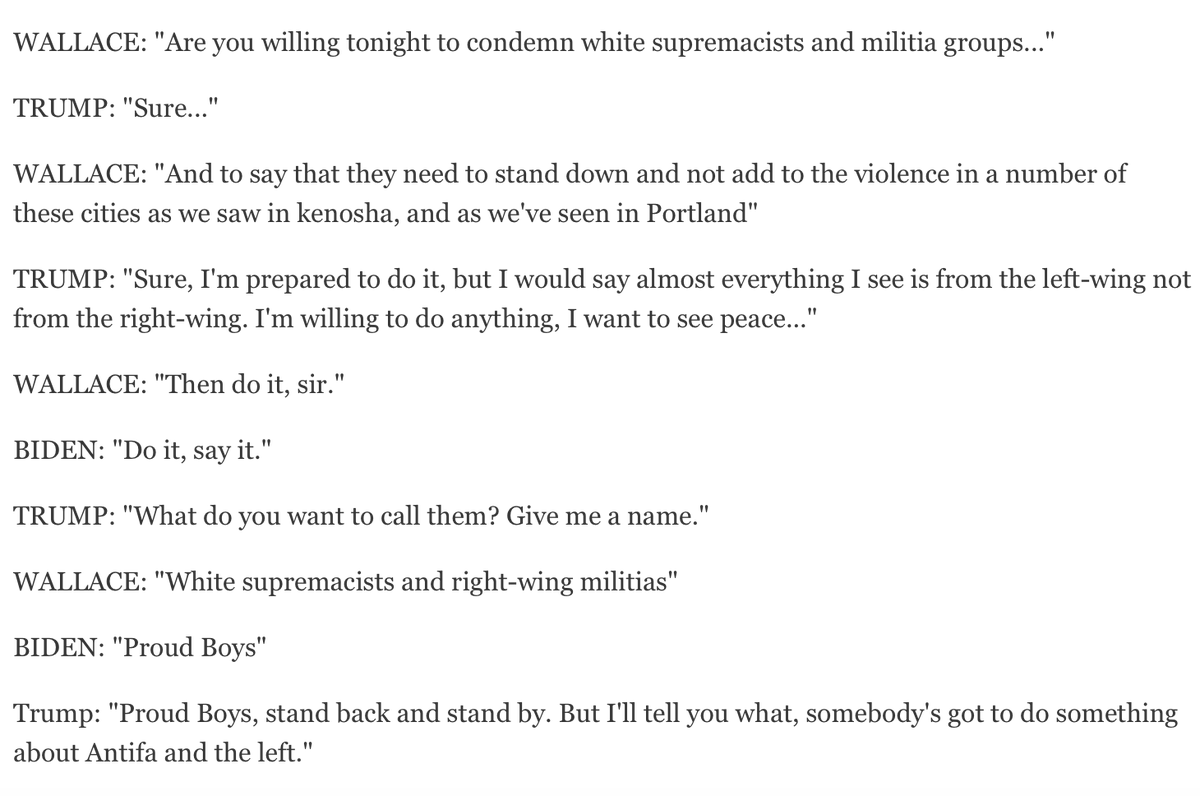 Does and idea have a flag

Does an idea have a name

Does an idea run around cities destroying businesses and hurting people

So when Trump asked Biden to say law and order he had a problem, plus Trump asked him to name a single law enforcement agency anywhere in the nation that endorses him.  He couldn’t

Chris Wallace did everything possible to help Biden tonight. He pushed all the hoaxes that have been debunked already  , the “very fine people” hoax. Transformed “defund the police” to “community policing” Lied about critical race theory.

Critical Race Theory is the idea that the major institutions of the United States are tainted by slavery and racism because they were founded when slavery was still legal in parts of the country. According to the late Derrick Bell, who founded Critical Race Theory, the very institution of private property is tainted by racism because of slavery. Even the Civil Rights movement was regrettable to some extent, Bell believed, because it created an illusion of racial equality. Only a massive redistribution of wealth, driven by the creation of socioeconomic rights, can cure American society of its systemic racism, the theory holds.

On a practical level, Critical Race Theory teaches that social interactions are guided by “white supremacy,” and that society is corrupted by “systemic racism,” according to which black Americans must always be victims — even if unconsciously so. Critical Race Theory is the ideology animating the Black Lives Matter movement that has brought unrest to America’s cities.

Christopher Rufo, a contributing editor for the Manhattan Institute’s City Journal, recently exposed the fact that some federal agencies were using Critical Race Theory in their diversity training. In response. President Trump ordered federal agencies to stop using the doctrine, and the Office of Management and Budget issued a memorandum ” directing all federal agencies “to begin to identify all contracts or other agency spending related to any training on “critical race theory,” “white privilege,” or any other training or propaganda effort that teaches or suggests either (1) that the United States is an inherently racist or evil country or (2) that any race or ethnicity is inherently racist or evil.”

Here’s a taste of what went on in the trainings Trump ended, per Chris Rufo’s reporting in The Post. https://t.co/EiQhKvOrOs pic.twitter.com/qevQjqMXRK

floating the idea that Biden skip the next two debates: “I think Biden has a decision to make.”

They wouldn’t be saying this if they actually thought Joe Biden won! https://t.co/LBbTZozaBa

CORRECT THE RECORD: BIDEN MAKES 33 FALSE OR MISLEADING CLAIMS AT THE DEBATE

BIDEN: “I’m not opposed to the Justice.”

FACT: Biden and Harris have both publicly opposed Judge Amy Coney Barrett’s nomination to the Supreme Court, despite glowing reviews from the legal community and her colleagues.

BIDEN: “There’s a hundred million people with preexisting conditions and [their insurance will] be taken away as well.”

FACT: Biden’s claim has been called “misleading,” and President Trump has said he will always protect Americans with pre-existing conditions.

FACT: History is on the side of filling the Supreme Court vacancy now, and Joe Biden previously said the President had an obligation to name a nominee, even in an election year.

BIDEN: “He’s been promising a health care plan since he got elected. He has none, like almost everything else he talks about. He does not have a plan. He doesn’t have a plan.”

TRUMP: “You agreed with Bernie Sanders to the manifesto and now you’re disavowing it.” BIDEN: “There is no manifesto.”

FACT: There is a manifesto, and Biden’s campaign worked with Sanders’ associates to write it.

So what was Trump plan during the debates, he knew that Biden was going to coached, he knew Wallace was going to help him anyone he could, the questions were loaded against Trump. So Trump to hit Biden hard, interrupt, he wanted him to crack, but who blocked, Wallace, he made sure that Biden would be able to calm down and compose himself before he had a mental breakdown

Today we had Comey testify, remember Comey is never going to admit to anything, these public hearing are just to get him on record so it can be used against him later on.

Comey just flat out denied he received the investigative referral to look at Hillary for concocting the Russia hoax. This is directly contradicted by yesterday’s revelation as well as by an Sep 7, 2016 memo that Lindsey just read out.

#Durham @ Senate Judiciary hearing @comey told @LindseyGrahamSC he had no recollection of the August 2016 CIA notification that @carterwpage had provided intel to the Agency about Russia. Comey appeared to distance himself from FISA saying Page surveillance warrants were just

a “slice” of overall Russia investigation. WHY THIS MATTERS:
FBI lawyer Clinesmith recently pleaded guilty to altering CIA email to wrongly state Page had no prior relationship with the CIA. @CBSNLive @CBSNews 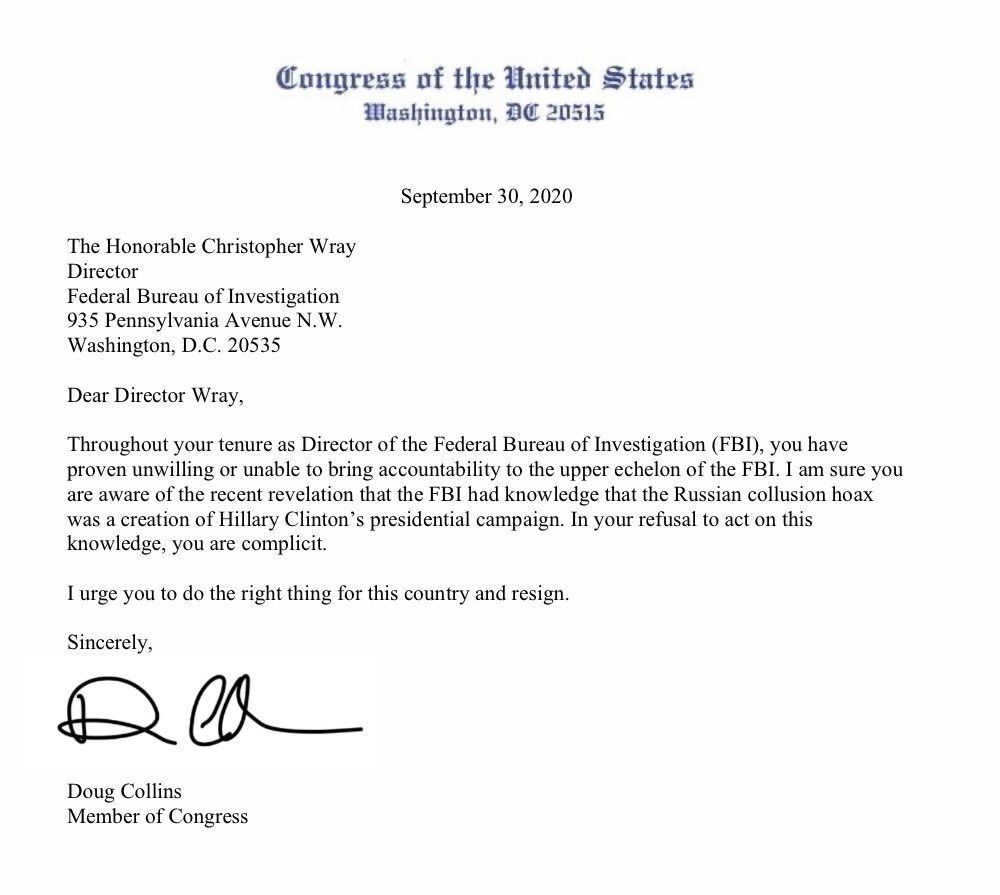 NEW: @JudicialWatch will appeal the liberal-dominated appeals court ruling that overturned court order that Hillary Clinton testify about her emails and #Benghazi attack documents. In meantime, DOJ/State are trying shut down the entire lawsuit. https://t.co/LUhXYgjIAI

Wow! 100,000 Mail In Ballots in New York City a total MESS. Mayor and Governor have no idea what to do. Big Fraud, Unfixable! Cancel Ballots and go out and VOTE, just like in past decades, when there were no problems!

“Now the social networks are facing an even bigger challenge — finding QAnon content on their platforms that doesn’t mention Q, QAnon or any of the related hashtags and catchphrases.”https://t.co/2zJIR5W9FY

One thought on “How Do You Expose Treason,Sedition To A Larger Audience,Keep Watching,Enjoy The Show – Episode 2290”