The [CB] are continuing with their plan, but as more people see their plan the more they are losing the narrative. [JB] says the black community cannot get ahead because they can’t find accountants or lawyers. [JB] budget plan where continually says the wealthy do not pay taxes is false. Right on schedule the great reset push is happening two cyber attacks on the exact things they want removed. Klaus Schwab is angry because businesses are not going along with the great reset plan. The [DS] is in trouble. Everything they have done or are trying to do is being exposed. Emails were released that shows Fauci knew that covid was engineered and funded. That the spread of the virus was not asymptomatic, that there were drugs that would cure it and he explained in his emails that masks do not work. There was no reason for the lockdowns. The [DS] is panicking, they don’t know Trumps next move. The states are leading the charge and the audits will reveal the truth. Ep 2493a – The [CB] Is Struggling With Their Narrative, Patriots Controlling It All

Biden and the 1 Percent

All of JBS’s U.S. Beef Plants Were Forced Shut by Cyberattack

BREAKING 🚨 Russians are behind the cyberattack against meat processor JBS. Russia-linked cyber gang named REvil or Sodinokibi said to have launched the attack – reports

Previously, the same Russia-backed hackers REvil also targeted Apple in a $50 million ransomware attack via a Taiwan-based company that manufactures MacBooks and other products for the iPhone maker

The Biden administration on Tuesday formally ended a Trump-era immigration policy that forced asylum-seekers to wait in Mexico for hearings in U.S. immigration court.

That’s why we negotiated the remain in Mexico policy.

Remain in Mexico, also known as MPP (Migrant Protection Protocols), was not only a historic foreign policy triumph but one of the most successful border security programs anyone has ever put into effect anywhere. Along with our Central America Safe Third agreements, asylum reforms, and expedited removal procedures we drove border numbers to record lows and we ENDED the horrendous practice known as Catch-and-Release.

No American President had ever done more to defend the border and safeguard the whole immigration system.

The Biden Administration inherited the most secure border in history, and they turned it into the greatest border disaster in history.  Our border is now run by cartels, criminals, and coyotes. Illegal immigrants, gang members, and lethal drugs are pouring across like never before. Not only are illegal immigrants being caught and released, they are being put up in hotels at taxpayer expense.

Our country is being destroyed before our very eyes.

The Biden Administration’s disastrous decision to formally end the Remain in Mexico policy is proof that their objective is to eliminate the U.S. border entirely and flood the country with so many illegal aliens that every community is overwhelmed.

Joe Biden is the first American President who doesn’t want America to be a nation at all.

Law requires the Department of Defense to name all the Chinese military companies operating in the U.S.

The DOD should publish this report immediately to block American technology and funding from flowing to the PLA.https://t.co/p3kCMc67ZI

Massive fire breaks out at oil refinery near Iran’s capital

Fauci agreed to ‘work together’ with Chinese official on the coronavirus pandemic in 2020, new emails show Huh. Turns out the whole “asymptomatic spread” thing was a lie. Whodda thunk it? pic.twitter.com/Lx6vaRGhCM 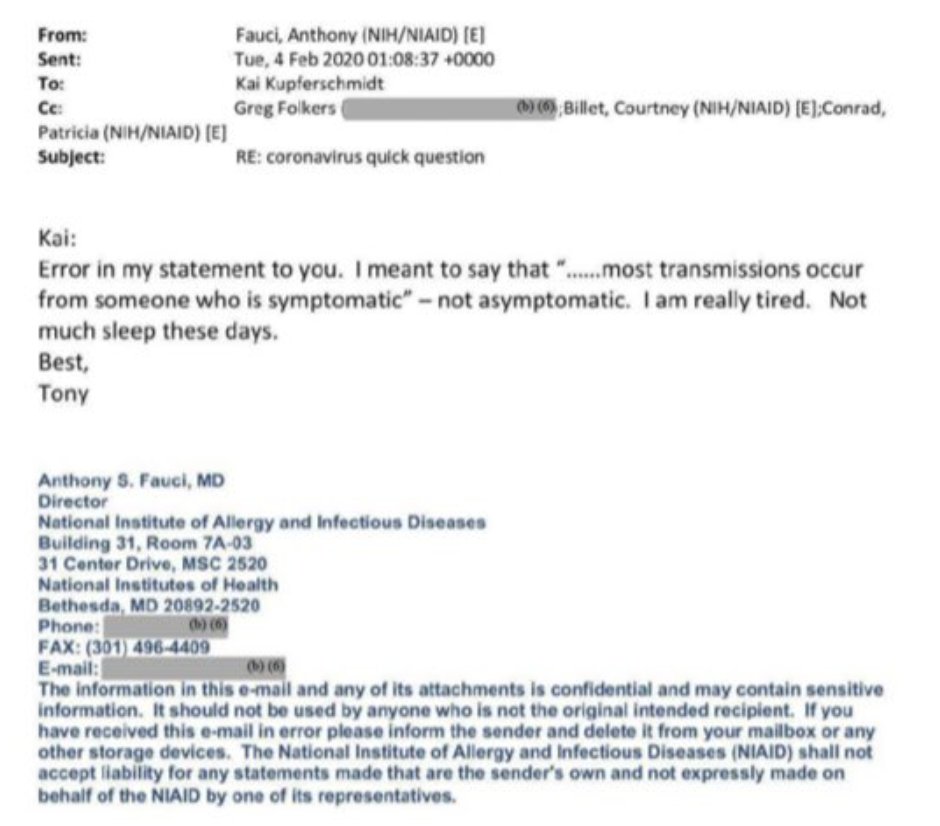 In an email physicist Erik Nielsen sent to Fauci on March 2020, he recommended not one, but TWO DRUGS that could help battle #COVID19. One of the drugs was Hydroxicloroquine.

Donald Trump was dragged when he recommended the same drug.

This is the entire email including the last two parts I included in my first tweet. #FauciEmails pic.twitter.com/pgQjm0ZGgV

I wanted to send a note of thanks for your leadership and everything you’re doing to make our country’s response to this outbreak as effective as possible. I also wanted to share a few ideas of ways we could help you get your message out, but I understand you’re incredibly busy, so don’t feel a need to reply unless these seem interesting.

This isn’t public yet, but we’re building a Coronavirus information Hub that we’re going to put at the top of Facebook for everyone (200+ million Americans, 2.5 billion people worldwide) with two goals (1) make sure people can get authoritative information from reliable sources and (2) encourage people to practice social distance and give people ideas for doing this using internet tools. This will be live within the next 48 hours.

As a central part of this hub, I think it would be useful to include a video from you because people trust and want to hear from our experts rather than just a bunch of agencies and political leaders. This could be done in a number of formats if you’re open to it. Probably best would be recording a Q&A where you answer people’s top questions, but we’d be open to other formats too.

I’m also doing a series of livestreamed Q&As with health experts to try to use my large following on the platform (100 million followers) to get authoritative information out as well. I’d love to have you do one of these Q&AS. This could be the video we put in the Coronavirus Hub or it could be a different thing that we distribute separately, but I think it could be effective as well.

Again, I know you’re incredibly busy, so don’t feel the need to respond if this doesn’t seem helpful. If it’s easy to talk live, give me a call anytime on my mobile phone: [REDACTED (b)(6)].

Thanks again for everything you’re doing.

-He had some urgent, time sensitive discussions about gain of function.
-Told colleagues retail masks don’t work due to size of virus.
-Ignored scientist who told him China was lying about virus and data.
-Was well aware of possible lab leak.

Of course, Fauci contradicted these emails in congressional testimony on multiple occasions. From playing dumb to saying the opposite of what he knew to be true, an uncorrupted corporate press would be blowing this story up, particularly on Wuhan Lab info.

“Can’t wait to see the media try to spin the Fauci FOIA emails,” he added:

My second question was going to be about Biden shutting down the State Dept investigation into COVID origins. Hopefully will be back in the briefing room in a few weeks depending on how the rotation shakes out.

Communist China at the VERY LEAST is guilty of covering up the spread of the Wuhan virus. The coverup continues putting every single living being at risk of the next great pandemic.

Image Name: DbjsnHhU8AAXGpx.jpg
Filename: 5c15e42b4bed2355fe8917d50ddb778d6d8a002d1d4590b1e7918ceef3e97531.jpg
Who are the real racists?
[2016 Democrat Nominee for President of the United States]
https://www.foxnews.com/politics/hillary-clinton-jokes-they-all-look-alike-after-interviewer-mixes-up-cory-booker-and-eric-holder
“THEY ALL LOOK ALIKE”
Fake News Cover Up > Prevent Black Americans from Seeing the TRUTH
Another FREE PASS?
Ignorance is BLISS.
https://www.youtube.com/watch?v=ryweuBVJMEA
[YOU ARE BEING CONTROLLED AND FED A FALSE NARRATIVE]
#TakeBackControl
#FactsMatter
#SheepNoMore
Q

Projecting who they are onto everyday americans, they need to remove those who seek to challenge their narrative. They are the White supremacists, the nazis, they don’t use these name anymore but they are the same people,

“The Desk of Donald J. Trump” section of President Trump’s website has been removed and will not be returning per @JasonMillerinDC.

Perhaps this is a precursor to him joining another social media platform?

Crisis is the rallying cry of the tyrant. – James Madison