Skip to content
Reports
February 2, 2021 x22report
SPREAD THE WORD
The people are now seeing how [JB] is killing the jobs in the US and give all the opportunities to people who do not live in the US. The people are seeing all of this in real time. [JB] is now diverting funds away from farmers into climate change fund. [CB] might not have the gold they say they do. Demand for precious metals is rising. The [DS]/MSM are using everything they have to get Trump. Trump responded to the impeachment charges and will use the constitution to counter the entire trial. Message are being sent and they are received. The patriots are moving forward with the plan. Burma was not by accident, Pompeo mentioned it right after the US elections. The [DS] has been warned. Ep 2394b – Impeachment Countered By Constitution, Ha, [DS] Has Been Warned Ep 2394a – Gold Will Destroy The Fed, Ready For A New Economic System

1,000,000 jobs lost with the federal moratorium on oil & gas leasing on federal lands

Central banks do not have the physical gold they pretend to have, fund manager tells Keiser Report

US Mint Reports Unable To Meet Demand For Gold And Silver Bullion Coin Purchases In 2020 Due To Pandemic, Plant Capacity Issues

#BREAKING Amazon’s Jeff Bezos will step down as CEO, Andy Jassy will take over Bezos will become Executive Chairman in Q3

STILL CLASSIFIED: The FBI is still withholding memos in the form of Microsoft Word documents on Gen. Flynn, Carter Page, George Papadopoulos and Paul Manafort. Hill investigators say they understand these are the FBI’s internal dossiers on each Trump adviser, generated in 2016

MEMORANDUM OPINION AND ORDER. It is therefore ORDERED that Defendants’ Motion to Stay Scheduling Order Deadlines (Dkt. [10]) is hereby GRANTED in part and DENIED in part. It is FURTHER ORDERED the Scheduling Order in this case is amended as follows: April 23, 2021 Deadline for Defendants’ Complete Production of Documents and Vaughn Index;

No more illusions in Myanmar

JUST IN – The civilians in #Myanmar start protesting against the military coup. Started at 8:00pm tonight. Listen 🔊 pic.twitter.com/GTNKyMNPEo

I call on Burma’s military to immediately release the civilian political leaders of the country and turn back from this abyss. We need to support the people of Burma in their journey toward democracy and impose costs on those who stand in their way. My full statement: pic.twitter.com/C2uOjnIVQx 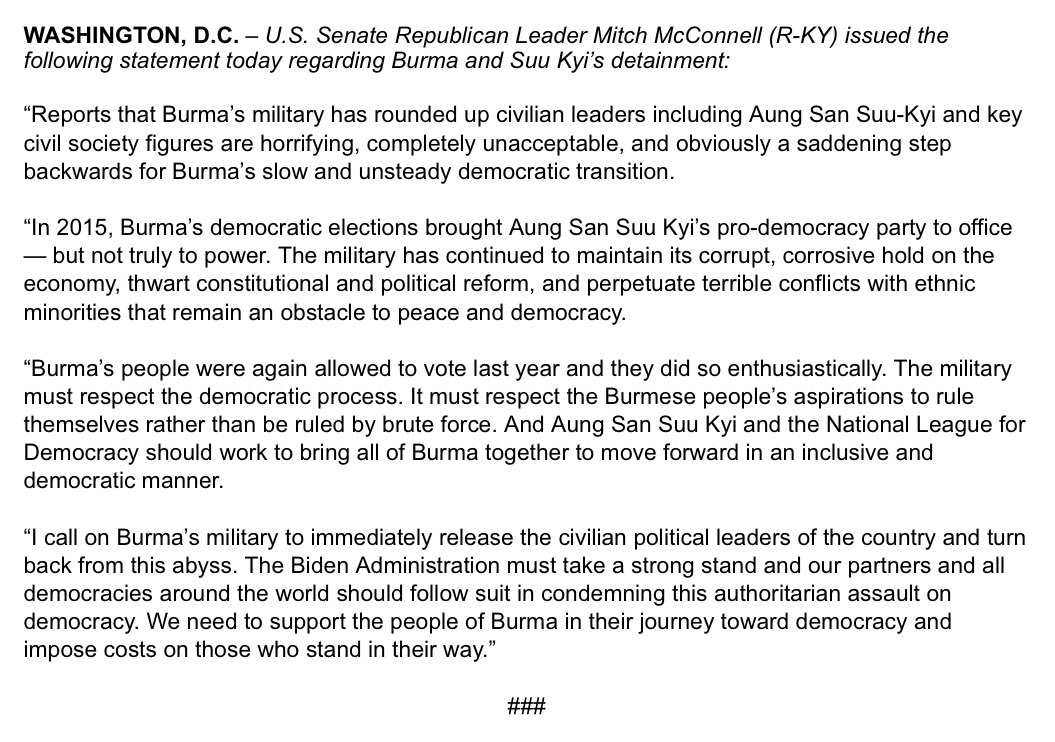 BREAKING: US State Dept has formally declared the Myanmar takeover a coup, will cut foreign assistance

i wonder if hes expecting them to convict him therefore violating a specific part of the constitution..trigger for military?

Here are all the times elected representatives objected to the Electoral College results, as they did last Wednesday:

But Republicans did it this year so it’s obviously “iNcItInG a CoUp!” now.

WH Press Secretary Psaki: “We’ve spoken to and [Biden has] spoken to the need for social media platforms to continue to take steps to reduce hate speech.” pic.twitter.com/jabB6hGl0R

This is extraordinarily dangerous and shows you how big tech is just an extension of the government.

1at amendment stops govt from silencing you, so the government wants to outsource that to the tech companies. (Also, as per Supreme Court there is no such thing as hate speech.) https://t.co/5qBWOBoyms

Nuclear War With China or Russia ‘A Very Real Possibility,’ US Admiral Warns

Hillary Clinton: “What difference does it make?”

We know that the CCP disappeared journalists. We know they silenced doctors. They corrupted the WHO. These are things we know. The CCP must be held accountable for what they did to the U.S. and to the world.

His SILENCE right now (so out of character) terrifies them….as it should. The fear and terror and confusion of the left that is on display right now for the world to see just reassures me that Trump’s counter strike will blow our minds and DESTROY those who thought that they conquered Trump. Amazing times right now.

The 45th President’s Answer to Article of Impeachment: pic.twitter.com/SWm1h0PQk3 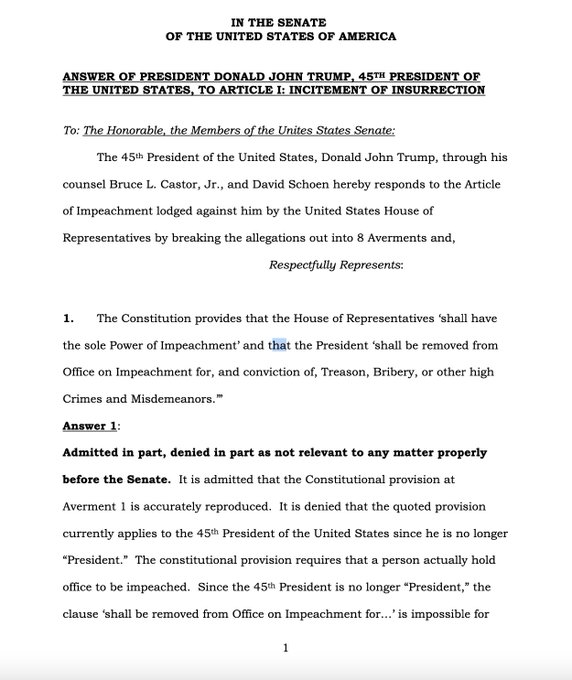