The establishment is now warning the parties in the UK that they will be targeted by hackers on a daily basis. Optimism in Small Business rises and the fear of recession is now fading away, the patriots plan is working. Trump gave a speech at the Economic Club of NY and he put the [CB] and the world on notice. Everything is about to change. The [DS] is doing exactly what the patriots want them to do, they are exposing themselves to the public while destroying themselves at the same time. The cast of characters are all part of the same [DS] group and the WB now has a WB reporting them. The world is changing the people are realizing who the real enemy is. Q drops more bread, lets us know that indictments are coming, we are now counting down and we are nearing t minus zero.

Economy is BOOMING. Seems set to have yet another record day!

Here are some highlights

“The American Market is the most valuable and coveted market on the globe – those who want access must play by the rules, respect our laws, and treat our workers and businesses FAIRLY,” Trump said

The [DS] is now in trouble, Trump is releasing another call he had with Ukraine, complete transparency, and truth, this will hit the fake impeachment again, this is what it is about, exposing all of these people, Q started to post again and Q is letting us know that indictments are coming soon, we will be talking about this a little later in this report, but first another government employee is now retiring

As the [DS]/Dems/MSM push the fake impeachment they are just making it worse for themselves, they are exposing the entire [DS] to the world and how they are all connected, but this is part of the plan,

“The President has until September 30th to give this aid to Ukraine. He gets it out on September 11th., 3 weeks before the deadline. So, we give our ally aid, and Joe Biden is not investigated. Remember that, they get the aid and we get nothing in return. The Democrats….

….want that to be an impeachable offense? Good luck with that!” @JesseBWatters @FoxNews

Then this leads us to Alex Vindman again, it seems he is the source of the WB information and now he is being exposed to the world and the [DS] now have a problem

According to Stephen McIntyre the demand that Ukrainian top prosecutor Viktor Shokin be fired as a condition for IMF loan almost certainly originated with Biden staff. The demand was first announced to Ukrainian prosecutors at a January 19, 2016 meeting with US officials hosted by the fake WB

And   Artem Sytnyk, the director of Ukraine’s National Anti-Corruption Bureau (NABU), a Soros group, who leaked documents on kickbacks to Manafort during the 2016 election, was also at the meeting.

And Now we have this

BREAKING: A new whistleblower has filed an official complaint with the Intelligence Community Inspector General asking him to investigate whether Adam Schiff’s “whistleblower” is breaking the law https://t.co/vXB3t3WB4k

The complaint, which was filed last week  alleged the donations from roughly 6,000 individuals “clearly constitute” gifts to a current intelligence official that may be restricted because of the employee’s official position pursuant to 5 CFR 2635.203 and other statutes. To date, the GoFundMe has raised over $227,000.

The complaint also raised the possibility that some of the donations may have come from prohibited sources, and asked the ICIG to look into whether any “foreign citizen or agent of a foreign government” contributed.

Why is such a focus put on 2nd and 3rd hand witnesses, many of whom are Never Trumpers, or whose lawyers are Never Trumpers, when all you have to do is read the phone call (transcript) with the Ukrainian President and see first hand? He and others also stated that there was…..

…..”no pressure” put on him to investigate Sleepy Joe Biden even though, as President, I have an “obligation” to look into corruption, and Biden’s actions, on tape, about firing the prosecutor, and his son’s taking millions of dollars, with no knowledge or talent, from a…..

….Ukrainian energy company, and more millions taken from China, and now reports of other companies and countries also giving him big money, are certainly looking very corrupt (to put it mildly!) to me. Both Bidens should be forced to testify in this No Due Process Scam!

In order to continue being the most Transparent President in history, I will be releasing sometime this week the Transcript of the first, and therefore most important, phone call I had with the President of Ukraine. I am sure you will find it tantalizing!

I will be releasing the transcript of the first, and therefore more important, phone call with the Ukrainian President before week’s end!

Still very interesting how Washington Democrats and some in the media kept demanding to hear from the whistleblower—and yet the moment the potential coordination between the informant and Adam Schiff became public, the whistleblower was “no longer relevant”

Notice how the patriots are pushing the Dems down this path,

Now the criminal investigation conducted by Durham are now winding down, the IG report is set to be released, and we find out that Now we are expecting the IG FISA Report before thanksgiving, CG tweeted out the following

If FISA Inspector General Horowitz report doesn’t come out next week when they said it would then I will be very disappointed & left to wonder WHAT THE GAME IS?? Is someone at FBI or DOJ tying IGs hands??

We will be talking about the indictments and the report a little bit later when we cover Q posts.

Trump: ‘Many of the People in DACA, No Longer Very Young, Are Far From Angels,’ Some Are ‘Hardened Criminals’

Many of the people in DACA, no longer very young, are far from “angels.” Some are very tough, hardened criminals. President Obama said he had no legal right to sign order, but would anyway. If Supreme Court remedies with overturn, a deal will be made with Dems for them to stay!

People Worldwide Are Standing Up to Communists, Regimes and Insane Elitist Policies – People Just Want to be Free!

Protests continue in spite of threats from the government and Iran –

In Spain the people are standing up to the insane policies of the European elites.  The VOX party recently won more seats in the government with a nationalist platform that is anti-abortion and anti-illegal immigration.

This the routing url for 8kun which we have now found it goes goes through a Defense Department (DoD) server.

What AB[C] agency did Durham target?
How are messages sent?
https://www.rollingstone.com/culture/culture-news/frank-cali-murder-mafia-boss-qanon-motive-anthony-comello-861777/📁

Anthony Comello, 24, murdered alleged mob boss Frank Cali because he became convinced he was part of a deep-state conspiracy against President Trump, his lawyer alleges

[Dec 12 2018]
“What if there’s another prosecutor (outside of DC) assigned by SESSIONS w/ the same mandate/authority?” – Q
Do you believe in coincidences?
5:5?
Be ready, Patriots.
Q 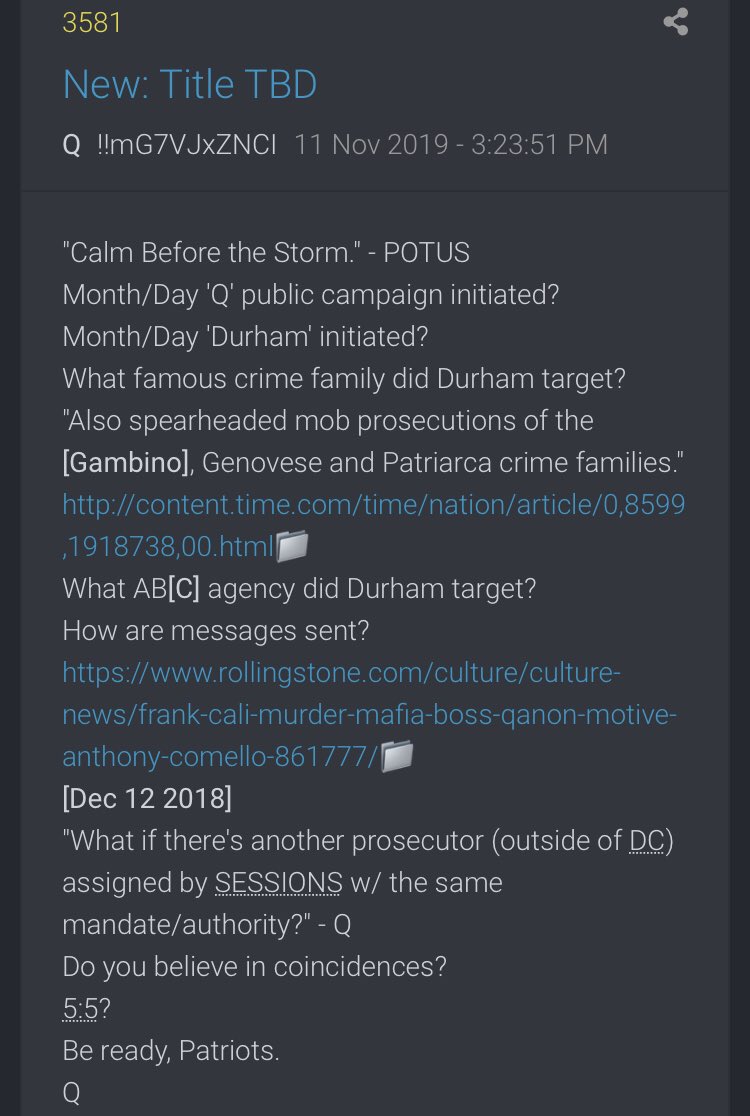 The MSM has been attacking Q since Q came online, now since Q has returned the MSM is going crazy, it was like they prepared for this, created stories and were ready for Q’s return. All for a LARP a conspiracy

[Jun 12 2018]
“Would you believe Hussein tried to call Kim prior to the Summit?
He did not have his updated phone number.” – Q
https://www.dailymail.co.uk/news/article-7597821/Trump-claims-Obama-tried-call-Kim-Jong-11-times-no-respect-dictator-wouldnt-answer.html📁

It seems that POTUS told Kim Jong Un to change his phone number, remember Trump and Kim write to each other, the DS is in the dark so OBama had no idea

“So Google bought this AI company called DeepMind,” Vorhies replied. “Let me just put it in plain language what that is, DeepMind was creating a god-like AI system that is able to ingest the available public information on the internet and make sense of it. Think of it like Amazon Alexa except much much much more intelligent. This AI system was moved out of the UK I believe and placed into China, and it’s been dubbed the AI Manhattan Project.”

DeepMind disputed Vorhies’ comments in a statement to Breitbart News. A DeepMind spokesperson said:  “DeepMind is a scientific research organisation headquartered in the UK and does not have operations in China.”

Vorhies continued: “Peter Thiel — he accused Google of acting in a treasonous way. This is how serious this project is. It’s the most sophisticated and advanced AI project in the world made by an American company and placed in China.”

Vorhies stated: “When people think of surveillance they usually think of country surveillance. This is planetary surveillance of all information that is available on the surface web and also any sources that it can get in the deep web and utilizing Google’s extensive deep analysis of its book scanning stuff. So think of the Library of Alexandria of all available websites that you can search for and all that data gets fused together and a decision-making process gets formed because of that. This is essentially what the Google DeepMind project is all about.”

Deep Dream (CIA wanted to use for mass surveillance) from Bourne Ultimatum nearly a decade prior. pic.twitter.com/XlcjZFxInE

Snowden was CI_A & advanced their illegal domestic surveillance program while pretending to be an NSA whistleblower. The CI_A has many operatives in government past and present   All to control foreign policy and preserve the agency & its agenda.

Q indicated that the unsealing of indictments (JUSTICE) would not happen until the DOJ IG report on FISA abuse and Declassification of Spygate documents were released to make the public aware of the crimes of the previous administration. We are nearing the release of both.

4 thoughts on “Indictments Coming, We Are Now Nearing T Minus Zero – Episode 2019”