There is a difference between the blue states and the red states. People can now see the difference between unemployment. [CB] are now pushing the digital currency forward. The [CB] readies their great reset completely exposed, there is no cover story, people are seeing it all playout in real-time, in the end the people of the economic power. The [DS] is panicking, they are readying a [FF] to distract from the election fraud. The fake news is pushing every angle but it is not working. Durham is in the shadows, optics are very important. This is irregular warfare, everything is not what it seems. The clock is ticking down, nothing can stop this, nothing. The number of workers paid benefits through regular state programs fell 13.8% by the week ended June 12 from mid-May—when many governors announced changes—in states saying that benefits would end in June, according to an analysis by Jefferies LLC economists. That compares with a 10% decline in states ending benefits in July, and a 5.7% decrease in states ending benefits in September. Workers on state programs would lose the $300 weekly federal enhancement but could continuing receiving the state benefits.

The media gets mad we don’t answer their questions so they can wrap what we say in their little bow of #FakeNews. Instead, we just post the truth on social media and bypass them. We don’t need permission to talk to the American people.

Over the past thousand years, influenza has killed hundreds of millions or billions of people. Bu the miracle virus COVID-19 made the flu disappear.https://t.co/SjGfIb2WLW pic.twitter.com/HjXzBjUOil 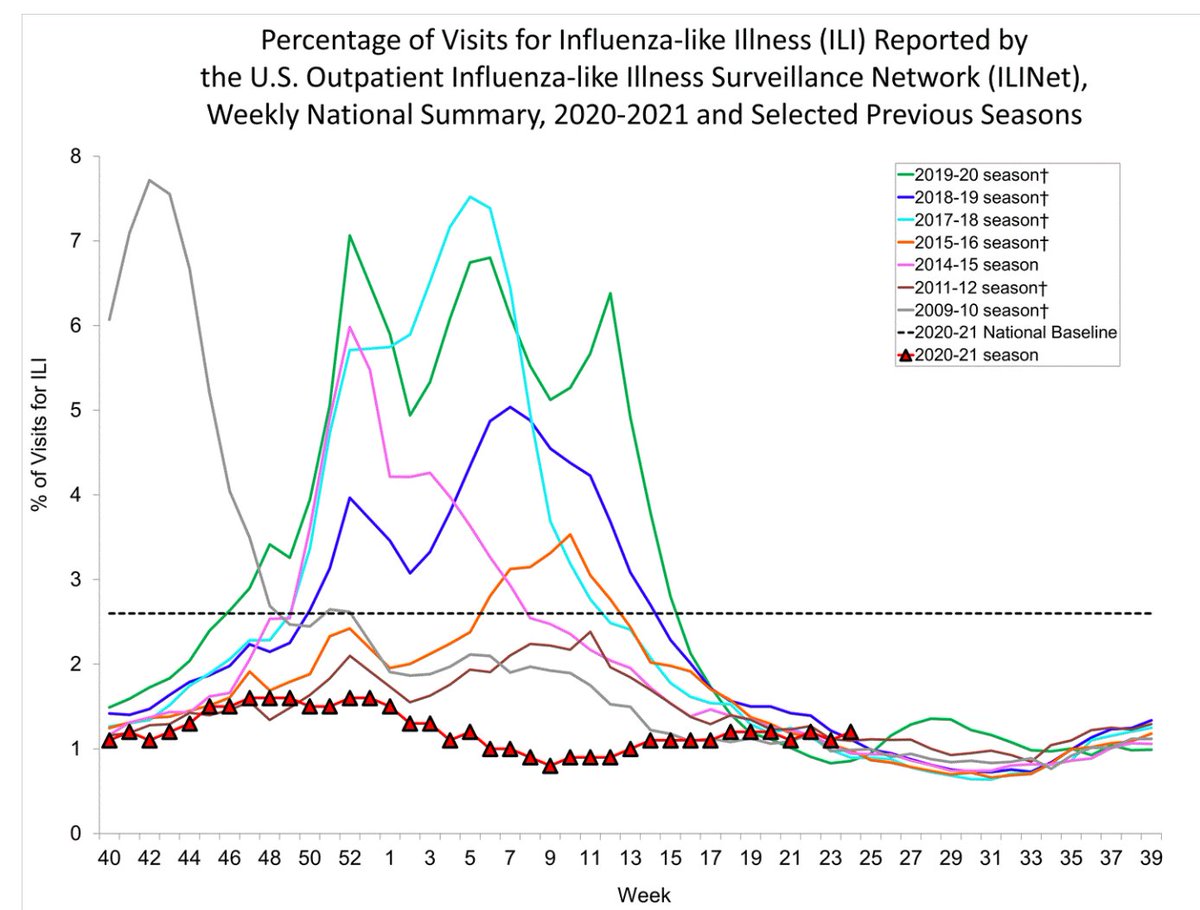 Now do the number of cycles used, show the people that the majority never had covid. The narrative is falling apart.

The Biden WH gives support to Gwen Berry turning her back on the national anthem during #TrackFieldTrials21. While Jen Psaki hasn’t spoken to Biden about her, she said “pride” in America means “respecting” those who recognize when we “haven’t lived up to our highest ideals” pic.twitter.com/OVgQXg3YAz

BREAKING: Oakland City Council votes to defund their police department by another $18.4 million.

“Attorneys for BLM and the demonstrators now face the unpleasant choice of reframing their case, and thus acknowledging the falsity of their initial allegations, or risking sanctions for alleging facts without evidentiary support.” https://t.co/KjjGfepH7A

A federal judge on Monday dismissed all but two of the claims Black Lives Matter and several individual demonstrators brought against Donald Trump, William Barr, and others in the sprawling lawsuit filed after the clearing of Lafayette Square on June 1, 2020.

Attorneys for BLM and the demonstrators now face the unpleasant choice of reframing their case, and thus acknowledging the falsity of their initial allegations, or risking sanctions for alleging facts without evidentiary support.

An exposed election algorithm deployed in 50 states in 2020

PA, GA, and MI heating up

Impact if theft is exposed https://t.co/kvZdJ3aCOf

RINO former Attorney General Bill Barr failed to investigate election fraud, and really let down the American people. Even the scam that took place in Georgia of ballot stuffing on camera, he couldn’t see what was wrong with it. Just like he failed to understand the Horowitz report and let everyone down with respect to getting a timely investigation (where’s Durham?) on all of the corruption of the Obama-Biden Administration.

It’s people in authority like Bill Barr that allow the crazed Radical Left to succeed. He and other RINOs in the Republican Party are being used in order to try to convince people that the election was legitimate when so many incredible facts have now come out to show conclusively that it wasn’t.

He came in with a semi-bang and went out with a whimper. Earlier in his term Bill Barr went ballistic on CNN with Wolf Blitzer warning Democrats were changing election rules to flood the system with mail-in ballots that “as a matter of logic” are “very open to fraud.” They are, and Bill Barr did nothing about it.

If there was no fraud, why are Arizona, Georgia, Wisconsin, Pennsylvania, and other States spending so much time and effort on exposing the fraud? We already know that:

101,789 “obsolete” voters on the rolls in Georgia, including 18,486 dead people
Ballot batches off by up to 17.5 percent in Maricopa County, Arizona
“Massive” chain of custody problems with drop boxes in Georgia, missing hundreds of thousands of records for months after the election
Thousands of ballots “wheeled in through the back door” in Fulton County days after the election
“Double feeding” ballots in Fulton County, Georgia
Nearly 200,000 illegal “indefinitely confined” votes in Wisconsin that violated Voter ID law
“Cash for votes” scheme in Nevada
Illegal alien votes
Election law changes were not authorized by the State Legislatures, which is mandated by the U.S. Constitution.

If he felt this way, why did Barr say he was “greatly honored” and “proud to have played a role in the many successes and unprecedented achievements you have delivered for the American people” in the final letter he wrote to me? He said, “Few could have weathered these attacks, much less forge ahead with a positive program for the country.”

Now it was revealed that Barr was being pushed to tell lies about the election by Mitch McConnell, another beauty, who was worried about damaging the Republicans chances in the Georgia runoff. What really damaged the Senate Republicans was allowing their races to be rigged and stolen, and worse, the American people to no longer believe their vote matters because spineless RINOs like Bill Barr and Mitch McConnell did nothing.

Bill Barr was a disappointment in every sense of the word. Besides which, Barr, who was Attorney General (lawyer) shouldn’t be speaking about the President. Instead of doing his job, he did the opposite and told people within the Justice Department not to investigate the election. Just like he did with the Mueller report and the cover up of Crooked Hillary and RUSSIA RUSSIA RUSSIA, they don’t want to investigate the real facts. Bill Barr’s weakness helped facilitate the cover up of the Crime of the Century, the Rigged 2020 Presidential Election!

Had Mitch McConnell fought for the Presidency like he should have, there would right now be Presidential Vetoes on all of the phased Legislation that he has proven to be incapable of stopping. Not to mention, he lost two Senatorial seats in Georgia, making the Republicans the Minority in the Senate. He never fought for the White House and blew it for the Country. Too bad I backed him in Kentucky, he would have been primaried and lost! Based on press reports, he convinced his buddy, Bill Barr, to get the corrupt (based on massive amounts of evidence that the Fake News refuses to mention!) election done, over with, and sealed for Biden, ASAP!

When a B2 bomber is no longer stealth (think public statements made last week) what must that signal?
Planned/coordinated attacks on BARR coming [smear campaign].
Public opinion is important.
Information warfare.
A Traitor’s Justice.
Q

Do you think that the DOJ under Trump should have exposed Election Fraud?

Do You Think Trump should have stayed in the WH using Military Force?

Do you think Trump should have used the military to arrest everyone?

Think of the optics. We were always told that the people had to take back the country.

The only way to take it back is to understand how the [DS]/fake news system works, how they manipulate, how they cheat.

The people needed to see it all and then take action, We are in the people taking action phase now.

Barr was stealth, Just like everyone else, Trump needed Barr for a specific purpose, to navigate thru Russian collusion and to distract from Durham.

This is irregular warfare. Look over there not over here

I wonder if something else is about to come out. Drip, Drip

They just said, ‘When this indictment comes down, he won’t be charged. Our investigation is ongoing,'” Ron Fischetti told Politico.