The people are now seeing a different economy, they are experiencing the [CB] economy on it’s way out. People are experiencing inflation, this is the indicator that wakes people up, because it happens in real time. Trump put out a statement about the infrastructure. Countries are now moving away from fiat and moving towards sound money.  The [DS] is panicking, Trump is now shaping the narrative.  Optics are important, timing is important, Trump must be neutral. The [DS] players are planning something, they know that it is game over. The fake news is having trouble keeping their audience, people are no longer believing. The [DS] is most likely setting up 2 different [FF], the narrative is being built. Ep 2514a – Sound Money Is Beginning To Spread Around The World 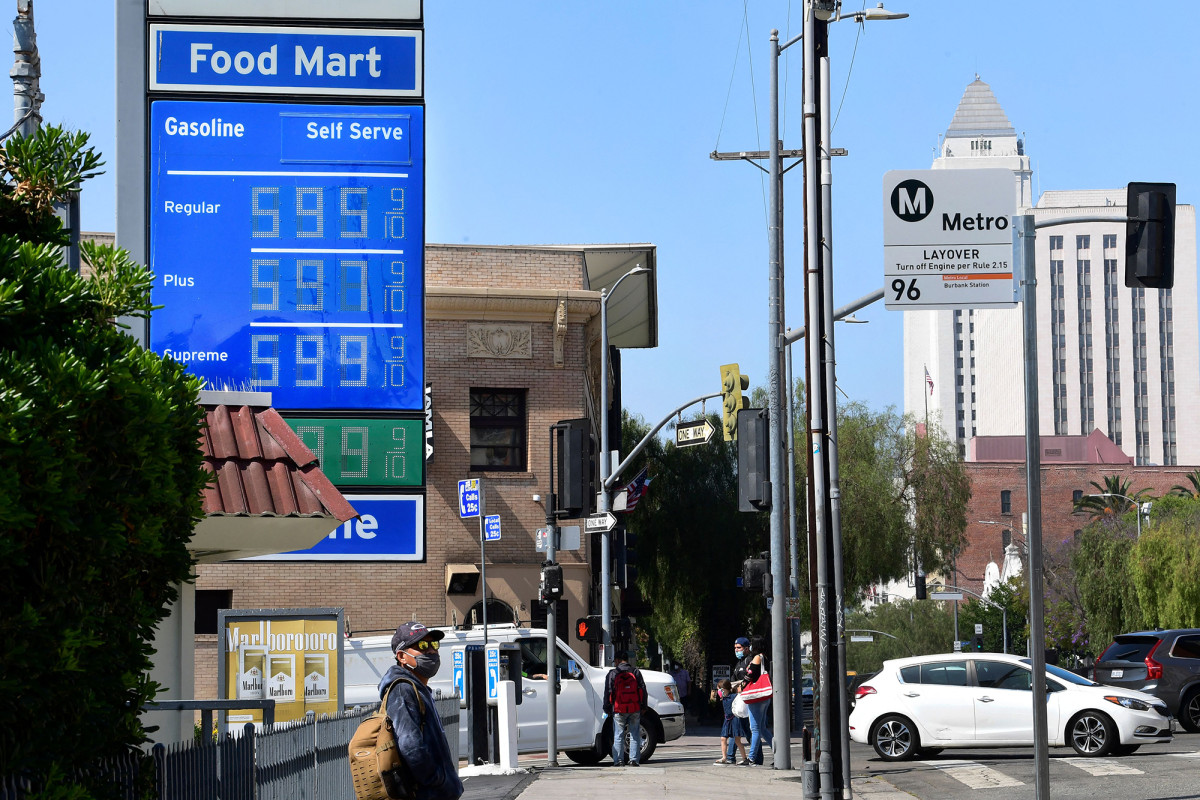 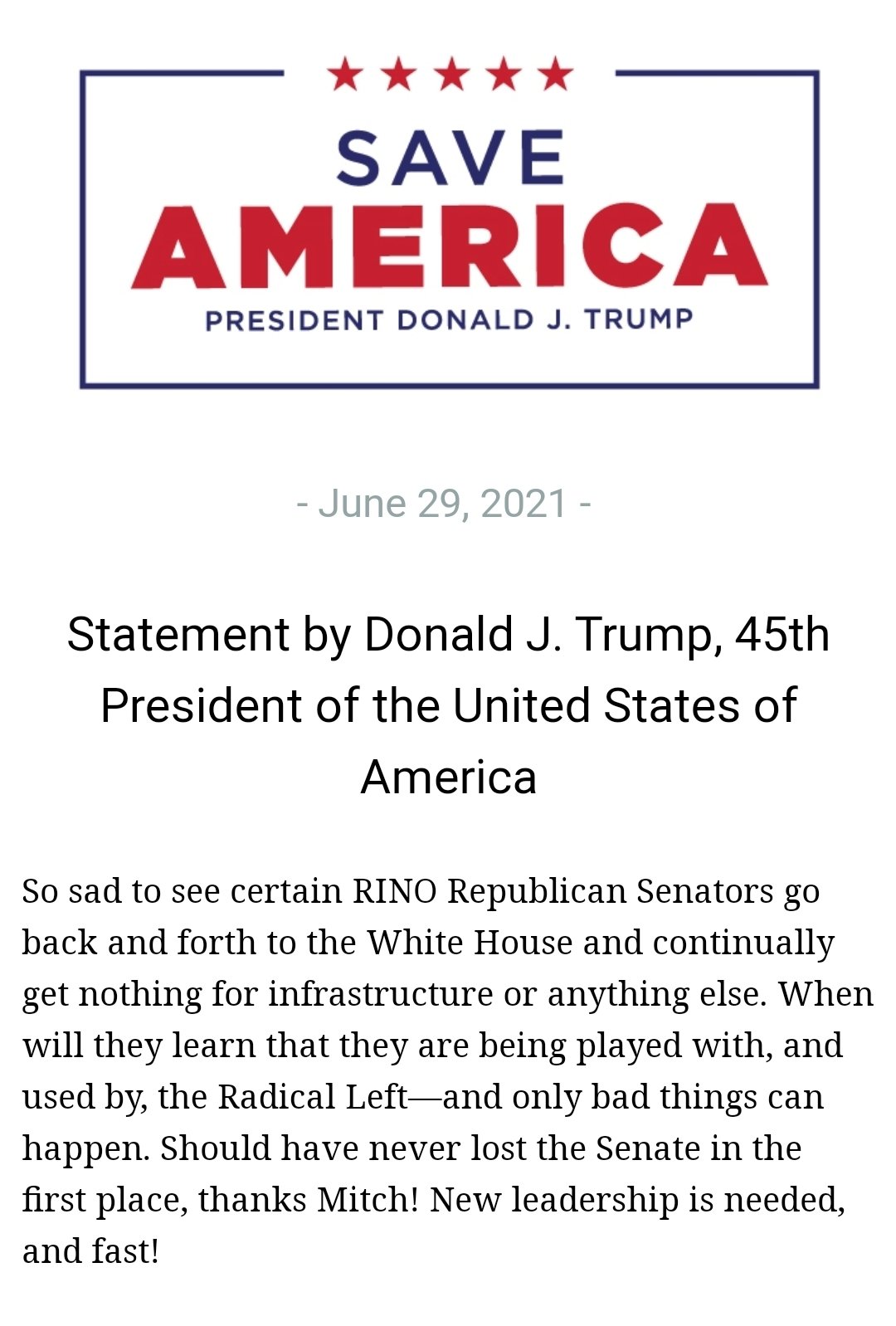 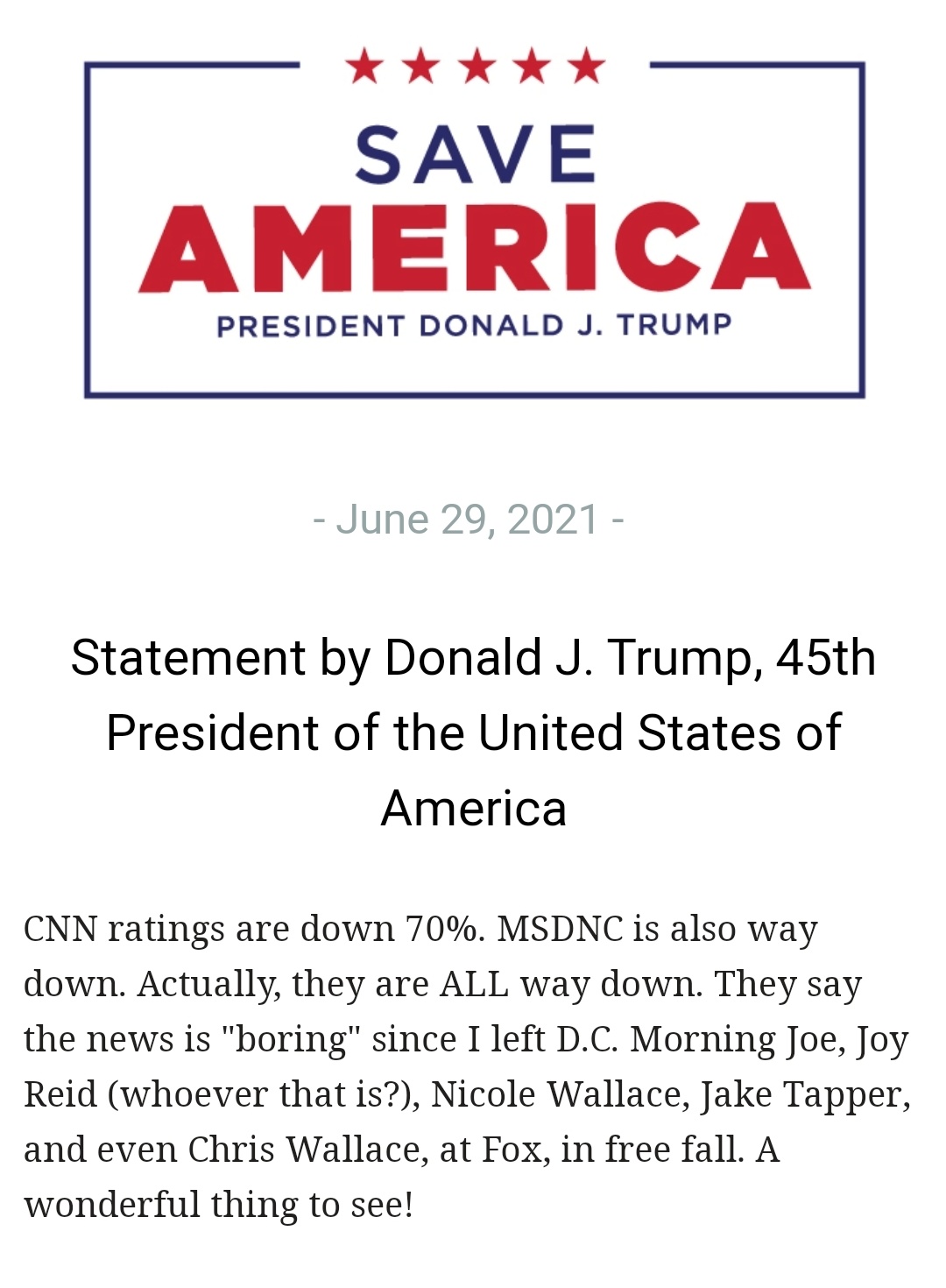 “Nike is a brand that is of China and for China” Nike’s CEO. My thoughts on Nike finally saying the quiet part out loud. https://t.co/u3PuJ7mTUy

Palm Beach Destined to Sink Beneath the Sea? 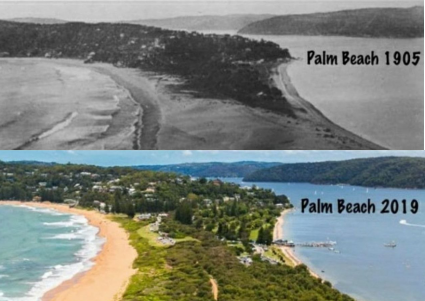 The world leaders at the G7 summit told the world that climate change is a huge threat and the sea levels are rising. Obviously, all the millionaires in Palm Beach are asked to donate unlimited amounts of money to stop the sea from rising, or all their homes will vanish. 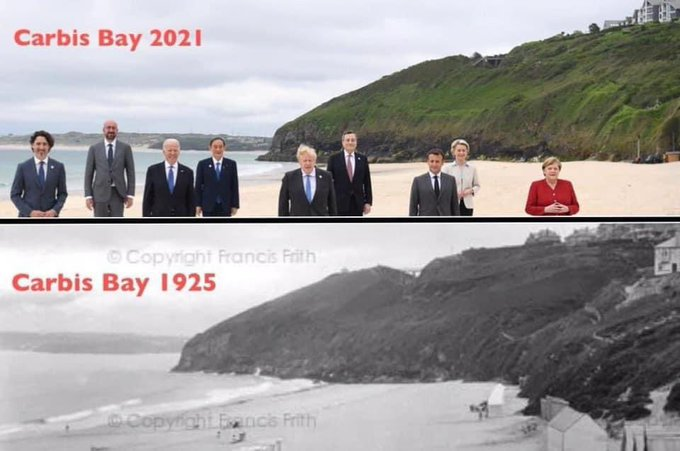 Bloomberg: The Pentagon official who has been overseeing its new cybersecurity initiative for defense contractors has been placed on leave in connection with a suspected unauthorized disclosure of classified information from a military intelligence agency.

Let’s talk about who defunded the police. When we were in Congress last year trying to pass a rescue plan — I’m sorry, not the rescue plan but an emergency relief plan for cities that were cash-strapped and laying off police and firefighters, it was the Republicans who objected to it. And in fact, they didn’t get funding until the American Rescue Plan, which our plan allowed state and local governments to replenish their police departments and do the other things that are needed. FMR. PRES. OBAMA: “If we don’t stop [GOP voting efforts] now, we are going to see a breakdown of the basic agreement that has held this magnificent democratic experiment together all these years…” pic.twitter.com/DPPG6k5UuW

If we don’t stop the voter laws changing, we will not be able to cheat. Once the audit is complete our ability to cheat in the election with the help of forein powers will be gone. We go to jail if this is exposed, we need to stop it now, FF

UPDATE: The #AZAudit ONLY received roughly 60% of the machines to evaluate. We should be scared of buying the new replacement equipment because there is no way to detect if the new equipment has been tampered with or not. What did the Arizona audit just check? (1/2)

We checked the machines as part of our evaluation. If tampered-with machines were such a concern, why didn’t Dominion send an observer when Dominion was invited? Dominion never showed. (2/2)

The reporters at local Arizona news outlets that this state senator refuses to talk to are all individuals with pens, phones, computers and sometimes even cameras 🤷🏼‍♀️ https://t.co/dbLZjDme6D

Sorry to break the new way we disseminate information, but as soon as I have some info I put it directly out to the American people on my social media instead of through a media filter. You get it when everyone else gets it. #FreePress https://t.co/LJAP42fQp8

Opinion: Why we should welcome MAGA defectors like Bill Barr -WAPO

Jonathan Karl’s story on Slow Moving Bill Barr is made-up beyond any level imaginable. It is, in other words, Fake News! I lost confidence in Bill Barr long before the 2020 Presidential Election Scam. It was when he dismissed and didn’t act on the very powerful Horowitz Report, and instead gave everything over to John Durham, who has seemingly disappeared from the planet. Can you even believe a report coming out during the Biden Administration? We caught them but unfortunately didn’t have an Attorney General who was capable of acting and wouldn’t go against his friends in Washington, D.C. Barr was a “swamp creature” who was devastated when the Radical Left wanted to impeach him. He, and other RINOs (you see it all the time!), always fold. If he becomes “less” for President Trump, maybe they will leave him alone. It takes a very strong and special person to go against the “mob”. Bill Barr was not that person. Despite evidence of tremendous Election Fraud, he just didn’t want to go there. He was afraid, weak, and frankly, now that I see what he is saying, pathetic. The facts are rapidly coming out in States and Courts about the 2020 Presidential Election Scam, and let’s see if Bill Barr, a man who was unable to handle the pressure, was correct? The answer will be a resounding, NO!

Mockingbird
HRC detained, not arrested (yet).
Where is Huma? Follow Huma.
This has nothing to do w/ Russia (yet).
Why does Potus surround himself w/ generals?
What is military intelligence?
Why go around the 3 letter agencies?
What Supreme Court case allows for the use of MI v Congressional assembled and approved agencies?
Who has ultimate authority over our branches of military w\o approval conditions unless 90+ in wartime conditions?
What is the military code?
Where is AW being held? Why?
POTUS will not go on tv to address nation.
POTUS must isolate himself to prevent negative optics.
POTUS knew removing criminal rogue elements as a first step was essential to free and pass legislation.
Who has access to everything classified?
Do you believe HRC, Soros, Obama etc have more power than Trump? Fantasy.
Whoever controls the office of the Presidecy controls this great land.
They never believed for a moment they (Democrats and Republicans) would lose control.
This is not a R v D battle.
Why did Soros donate all his money recently?
Why would he place all his funds in a RC?
Mockingbird 10.30.17
God bless fellow Patriots.

Just a reply to Q from last thread about Ingraham interview; It was an awful interview. Once again, weak, ineffectual, limp wristed promises to hold a vote, to hold Rosenstein in contempt. Who. Cares?

Until Rosenstein is hauled off by the House Sergeant At Arms, as granted per the Supreme Court, it means NOTHING. Anyone remember Holder? Nothing happened to him. Nothing. This pisses me off to no end. Just close the fist and crush them already. What the hell is Trump waiting for?!

>1723305
Full weight of the House v. ARM.
Why are optics important?
How does DC work?
WHY IS RYAN STILL IN OFFICE (lame duck)?
WHY IS RYAN LEAVING OFFICE?
WHO CONTROLS RYAN?
AUTISTS ENGAGED?
Q

The setup is complete, something big is about to drop

Radical Left New York City and State Prosecutors, who have let murderers, rapists, drug dealers, and all other forms of crime skyrocket to record levels, and who have just announced that they will be releasing hundreds of people involved in violent crime back onto the streets without retribution of any kind, are rude, nasty, and totally biased in the way they are treating lawyers, representatives, and some of the wonderful long-term employees and people within the Trump Organization. After hundreds of subpoenas, over 3 million pages of documents, 4 years of searching, dozens and dozens of interviews, and millions of dollars of taxpayer funds wasted, they continue to be “in search of a crime” and will do anything to frighten people into making up the stories or lies that they want, but have been totally unable to get. In an unprecedented move, they retained an outside “Never Trumper” lawyer from a Trump-hating law firm to work on the case. It is a continuation of the greatest Witch Hunt of all time.

Now they are issuing ultimatums, working in close conjunction with the Washington, D.C. hacks who have been investigating me from the day I came down the escalator in Trump Tower, but who have failed. In fact, the guilty parties were these prosecutors’ partners in crime, the Radical Left Democrats and friends. They will do anything to stop the MAGA movement (and me), even if it involves prosecutorial misconduct and harassment of a political opponent, which they are using at levels rarely seen before. They leak, they lie, and they campaign based on information that has already been gone through in other of the many investigations I have put up with.

Now they just leaked that we were given one day, today, to make our case about things that are standard practice throughout the U.S. business community, and in no way a crime. They also know that no matter how strong our case, they will work hard to embarrass us and the Republican Party.

Having politically motivated prosecutors, people who actually got elected because they will “get Donald Trump,” is a very dangerous thing for our Country. In the end, people will not stand for it. Remember, if they can do this to me, they can do it to anyone! Why would anyone bring their company to New York, or even stay in New York, knowing these Radical Left Democrats would willingly target their company if viewed as a political opponent? It is devastating for New York!

These Witch Hunters are relentlessly seeking to destroy a reputation of a President who has done a great job for this Country, including tax and regulation cuts, Border control, rebuilding the Military, and developing the vaccine in record time—thereby saving our Country, and far beyond. Washington, D.C. and ultimately, the U.S. Supreme Court, should finally stop these vicious, angry, and highly partisan prosecutors. They are a disgrace to our Nation!