Trump’s economy continues to improve, he sent a message to the [CB]/[DS] yesterday and today we see the V recoveries taking shape. Durable goods orders jump, real estate up, unemployment down and wages of government workers decline and private workers increase. [JB] releases the information that a lot money is going to be needed to send to the states. The [DS]/MSM are now trapped. The patriots are making their move, it all begins in PA, the keystone. [E] fraud is now being produced and public hearing are now happening. The keystone is the center stone that holds it all together. We need to go back to the beginning to understand the end, this was never just about a 4 year election, it was returning the country back to the people. Ep 2338b – Keystone Is The Start, Gettysburg Was The Turning Point of the War, Watch PA Ep 2338a -[JB] Revealed The Payback For The Lockdowns, It Already Failed

Almost 80% of Republicans think the election was stolen, that’s not a conspiracy theory, that’s widespread belief.

Majority of Republicans say they would vote Trump in 2024, poll | Just The News https://t.co/WlL75IBHuH

In Wisconsin, one type of absentee ballot does not require ID: “indefinitely confined.” (Covid does not create this status).

Below are the abs ballots this election and the year the voter initially claimed this status, which is indefinite.

I will release the full dataset for GA and PA with the package that includes the survey toplines, etc. pic.twitter.com/ifXe0SPKBk

It looks like a lot of people were pretending to be residents of Georgia. That’s more E-V-I-D-E-N-C-E.

Why isn’t the @GASecofState Brad Raffensperger, a so-called Republican, allowing us to look at signatures on envelopes for verification? We will find tens of thousands of fraudulent and illegal votes…

…This could also be very helpful to @SenDavidPerdue and @SenatorLoeffler. Why is he afraid of Stacey Abrams? We don’t need the ballots — we only need the signed envelopes!

In GA, they threw away the envelops with the signatures that the ballots came in, then commingled the mail-in ballots with the day-of ballots so there was no way to tell them apart.

It is time for GA Governor @BrianKempGA to order a full audit of votes allegedly cast in 11/3 election & special session of state legislature.

Mainstream & socialist media are propaganda arms of 3rd party bad actors who want to overthrow duly-elected President. They are Masters of Deceit.

They claim @realDonaldTrump lost & will now attempt a coup.

Facebook changed its algorithm to prioritize specific news outlets — those deemed authoritative by FB — after the election https://t.co/qMnLNOdDBH pic.twitter.com/75IkiQ0PGm 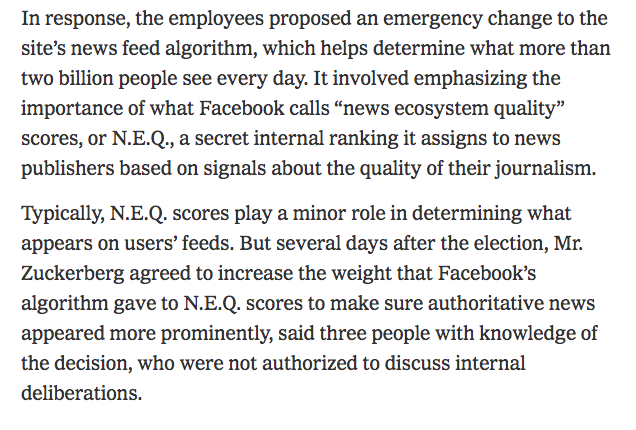 This confirms what I’ve heard anecdotally from conservative publishers: that their FB reach was throttled after the election

It is my Great Honor to announce that General Michael T. Flynn has been granted a Full Pardon. Congratulations to @GenFlynn and his wonderful family, I know you will now have a truly fantastic Thanksgiving!

Today RG was testifying in the public hearing with many witnesses.

WATCH: Crowd gasps after finding out that a mysterious spike of votes in Pennsylvania had 600,000 votes for Biden and only 3,200 for @realDonaldTrump pic.twitter.com/Sa1n3jpyhf

TAKE A LISTEN TO RG

HOLY CRAP! PA legislator says they never voted on the
D o m i n i o n system… it was MANDATED by the governor.

NEWS: Pennsylvania judge blocks state from certifying election results in presidential and all other races.@EpochTimes

PA certified the presidential and vice-presidential elections yesterday. In an emergency brief filed before midnight last night, the Republican plaintiffs pointed out that there was no need to act so fast. PA certified on Dec. 12 in 2016.

Simple plan: Hold hearings in key states. Prove election fraud was significant enough to affect the outcome. Ask the legislatures to do the right thing.

Learn to read the map.
The map is the key.
Find the keystone.
What holds everything together?
Q

Pennsylvania’s nickname is “The Keystone State” because it was the middle colony of the original thirteen colonies, and because Pennsylvania has held a key position in the economic, social, and political development of the United States.Politically, Pennsylvania played a vital role in holding together the states of the newly formed Union.

A keystone is a wedge-shaped piece at the crown of an arch that locks the other pieces in place; it is a stone on which the associated stones depend for support. Geographically, Pennsylvania’s central location along the arch of the 13 original states calls to mind a keystone. Politically, Pennsylvania played a vital role in holding together the states of the newly formed Union.

Three of our most treasured documents are associated with Pennsylvania: the Declaration of independence and the United States Constitution (both executed in Philadelphia), and Lincoln’s Gettysburg Address.

Pennsylvania’s state song mentions the state nickname in the second verse: “Birthplace of a mighty nation, Keystone of the land.” A keystone is also featured on the U.S. Mint’s Pennsylvania quarter.

Gettysburg Was the Turning Point of the War

The Battle of Gettysburg fought on July 1–3, 1863, was the turning point of the Civil War for one main reason: Robert E. Lee’s plan to invade the North and force an immediate end to the war failed.

What Lee (1807–1870) hoped to do was cross the Potomac River from Virginia, pass through the border state of Maryland, and begin waging an offensive war on Union soil, in Pennsylvania. After gathering food and much-needed clothing in the prosperous region of southern Pennsylvania, Lee could threaten cities such as Harrisburg, Pennsylvania or Baltimore, Maryland. If the proper circumstances had presented themselves, Lee’s army could even seize the greatest prize of all, Washington, D.C.

Had the plan succeeded to its greatest extent, Lee’s Army of Northern Virginia might have surrounded, or even conquered, the nation’s capital. The federal government could have been disabled, and high government officials, including even President Abraham Lincoln (1809–1865), might have been captured.

The United States would have been forced to accept peace with the Confederate States of America. The existence of a pro-slavery nation in North America would have been made permanent—at least for a while.

The collision of two great armies at Gettysburg put an end to that audacious plan. After three days of intense fighting, Lee was forced to withdraw and lead his badly battered army back through western Maryland and into Virginia.

No major Confederate invasions of the North would be mounted after that point. The war would continue for nearly more two years, but after Gettysburg, it would be fought on southern ground.

In addition to winning the Electoral College in a landslide, I won the popular vote if you deduct the millions of people who voted illegally

Lets go back to when Trump was first running, listen to it very carefully, it makes a lot more sense now doesn’t

13 thoughts on “Keystone Is The Start, Gettysburg Was the Turning Point Of The War, Watch PA – Ep. 2338”