Skip to content
Reports
March 8, 2020March 9, 2020 x22report
SPREAD THE WORD
The [CB] is now pushing the idea that no matter what the Fed does it will not help the economy. Lowering the rates, pushing stimulus will not help, we heard this before the last time around when the MSM was pushing a recession. The opposite happened and it will happen this time. The economy is getting ready to heat up, everything is now in place, it’s going to be a hot spring/summer. The [DS] is getting ready to push their event even harder, after that the [DS] will be low on ammunition, this is when the spring/summer bring the heat. [JS] did not get his case dismissed.  KH endorses JB. Articles now appear to show MO might enter the race. Crowdstrike distances themselves from the Russian hack of the DNC server. Messages are being sent, the heat is coming, [T -2] and counting.

Boston Fed President: Quantitative easing may not work as well next time

Recorded 7 days ago, with hostage-tape production values, Harris frames endorsement of Biden in terms of civil rights–same subject she attacked him on during campaign. https://t.co/mg8FbOCMal

We have now learned for sure that the Democrats don’t want anything to do with Crazy Bernie. Rigged? First @amyklobuchar & @PeteButtigieg quit the race & come out for Sleepy Joe BEFORE Super Tuesday. Pocahontas says NO & quits race AFTER ELECTION, thereby depriving Bernie of at..

…..least 5 States & the Nomination. Did the DNC & Dems tell Elizabeth Warren to wait? If so, they were deadly, the race would have been over, & Bernie would have won. Dirty double dealing? Nobody knows for sure, & history will be the judge. But I say, here we go AGAIN, Bernie!

BREAKING EXCLUSIVE: Crowdstrike and Their PR Firm Now Distance Themselves from Russia’s Link to Wikileaks

“So if Crowdstrike now claims they didn’t confirm that Russians gave emails to WikiLeaks, then who the hell did?”

You barely hear about it, but under @realDonaldTrump:

Nope, not true. @AP reporting off one unnamed individual. https://t.co/YQodmFN9dZ

We have a perfectly coordinated and fine tuned plan at the White House for our attack on CoronaVirus. We moved VERY early to close borders to certain areas, which was a Godsend. V.P. is doing a great job. The Fake News Media is doing everything possible to make us look bad. Sad!

It’s going to be a very hot [spring/summer].
Q

I am pleased to announce that Congressman Mark Meadows will become White House Chief of Staff. I have long known and worked with Mark, and the relationship is a very good one….

….I want to thank Acting Chief Mick Mulvaney for having served the Administration so well. He will become the United States Special Envoy for Northern Ireland. Thank you!

.@SecPompeo: The United States is not a party to the @IntlCrimCourt, and we will take all necessary measures to protect our citizens from this renegade, unlawful, so-called court. https://t.co/d39cdE8KmH pic.twitter.com/ZqkwxpomMI

Those responsible for the downing of Malaysia Airlines Flight #MH17 that tragically claimed 298 innocent lives must be held accountable. The U.S. has confidence in the Dutch legal system and calls on all States to cooperate fully with the ongoing investigation into this tragedy. 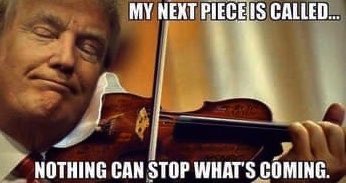 Today @DanScavino tweets that in a meme with @POTUS #QAnon #MAGA #WWG1WGA pic.twitter.com/0zju5ag6xw

‘A TOTAL LEGEND’: How Dan Scavino Became One Of Trump’s Most Important Advisers

Prepare for the Storm Anons

2 thoughts on “Messages Are Being Sent,It’s Almost Time,[T -2] And Counting,Time To Bring The Heat – Episode 2116”