Mortgages, existing and new home sales are shot up. The economy is moving forward and getting stronger. Trump since day one has built a strong foundation, this foundation can withstand the economic storm that is hitting now. The transition is prepared to move forward, nothing can stop this. The patriots are using the [DS]/MSM events against them, this is about exposing all the [DS] players, showing the people, forcing the [DS] to reveal their plan. NG and federal agents are now being positioned in each city, this is not by accident, this is for the main mission. The [DS] is fighting back, the censorship has begun, the EAS has been tested and it’s ready. The summer is going to get much hotter, the attacks are going to be worse as we get closer to the elections. This is part of the plan, exposing it all.

The gun Patricia McCloskey waved at protesters was inoperable when it arrived at the St. Louis police crime lab, but a member of St. Louis Prosecuting Attorney Kim Gardner’s staff ordered crime lab experts to find out why and wrote that it was “readily capable of lethal use,” in charging documents filed Monday, 5 On Your Side has learned.

In Missouri, police and prosecutors must prove that a weapon is “readily” capable of lethal use when it used in the type of crime with which the McCloskeys have been charged.

At the request of Assistant Circuit Attorney Chris Hinckley, crime lab staff members field stripped the handgun and found that it had been assembled incorrectly. Specifically, the firing pin spring was put in front of the firing pin, which was backward, and made the gun incapable of firing, according to the documents.

Firearms experts then put the gun back together, per Hinckley’s request, in the correct order and test-fired it, finding that it worked, according to the documents.

Crime lab workers photographed the disassembly and reassembly of the gun, according to the documents.

have been several incidents where individuals have tried to set the courthouse on fire, or gain access to destroy it” @CBSNews @ClareHymes22

Those lasers you see are weapons being wielded by communist insurrectionists that can permanently blind or injure law enforcement officers. https://t.co/6HjnRSxdRT

CHICAGO MAYOR: ‘Under No Circumstances Will I Allow Trump’s Troops to Terrorize Our Residents’

The standoff between law enforcement and protesters in the streets of downtown Portland has caused what some legal experts say could be a constitutional crisis. https://t.co/BTGK5zwmL1

.@CBPMarkMorgan shuts down antifa lie that DHS officers are “unidentified.” Every officer is identified clearly on the front, back & sides. They no longer display a name because of doxing that endangers their families. Instead, they wear an ID patch. https://t.co/OEk9nfCOHj pic.twitter.com/gVu3gBJclU

What many in the media won’t tell you about the violent anarchists in Portland ⬇️⬇️⬇️ https://t.co/t5mInrnbRj

.@DHS_Wolf. “Facts don’t lie. The facts are that these violent anarchists and extremists were violent well before DHS surged federal assets into Portland.”

The [DS] is using the same tactics that they used in other countries like Ukraine, when you look at the pics they look almost identical

If Twitter is going to crack down on “conspiracy theory” accounts, shouldn’t every single account that perpetuated the Russian Hoax for 3 years be permanently suspended?

Twitter went from… “We don’t have the tools to mass censor Trump supporters, alter trending topics or artificially prop up unpopular far left hashtags.” to… “We’re going to use every tool we’ve got to censor, remove and hopefully alter the 2020 election.” In a week.

Many thousands of MSDNC direct attacks have failed to control the reach [sway opinion] and prevent growth [‘free-thought’].
When direct attacks [use of inserts [cutouts]] fail > censorship [ban] deployed as aggressive method to slow/limit growth.
Next: more ‘act of violence’ frame-ups
CONTROLLED INFORMATION DISSEMINATION SYSTEM DESIGNED TO CONTROL YOU IS THREATENED.
If you posed no threat [reach and topics] to their control [information dominance] they would not continue to expend ammunition.
They would not care.
#2 attacked topic [#1 POTUS].
ALL FOR A ‘CONSPIRACY’.
INFORMATION WARFARE.
INFILTRATION NOT INVASION.
Q

🧐Interesting timing don’t ya think? #WeAreThenewsNow
Today, July 22, is the day @ jack🤡 is supposed to provide documentation to @Jim_Jordan regarding Twitter censorship of conservative accountshttps://t.co/jiaeIlSk4t pic.twitter.com/6qP0VuNX8b 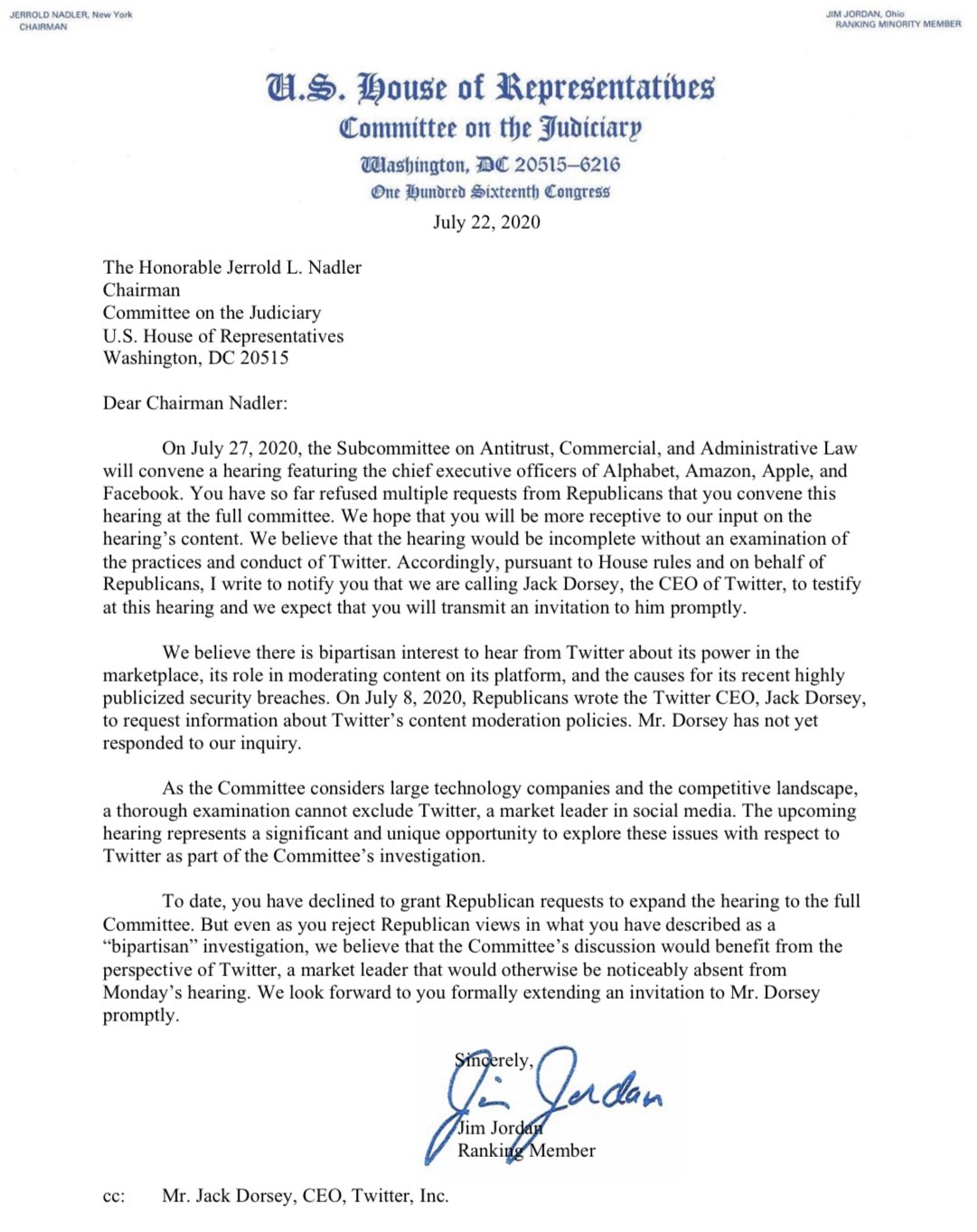 Q!!mG7VJxZNCI18 Feb 2019 – 3:50:20 PM
Chatter uptick re: how to effectively prevent cross-talk re: anti-narrative across all social media/online platforms.
Ability to prevent cross-talk narrows comms only to FAKE NEWS which provides for more control over what is released to inform the public.
A series of scenarios is currently being conducted [‘game the sys’] to test response, risk, and calc results.
‘Censorship’ [added] layers of inserted code ‘through keyword targeting’ in bio, history, and comments + indiv platform mods has failed to curtail the problem.
‘China-Russia-Iran’ ‘fake’ take-down hacks of select platforms (for maintenance) is one scenario being game-played.
[Zero-Day]
Countermeasures in place.
[Example]
Think Emergency Alert System.
Think WH controlled *new* RT ‘news’ website
Think WH controlled *new* video stream platform
Think Here.
Should this occur, immediate steps will be taken to classify each as ‘Public Utility’ (essential public services) to gain appropriate gov regulation (control).
Why do we make things public?
Q

You can all see the optics of this for the next 100 days, right?

The optics of Dem Mayors who have **lost control of their cities** as violent crimes SPIKE THROUGH THE ROOF writing letters DEMANDING Trump & Barr **send their cities no federal help whatsoever**?

All the sane citizens [and voters! Registered voters!] in cities like NYC, Seattle, Portland, LA, Chicago, Atlanta, etc. who’ve watched the growing violent chaos the past few months while their city/state leaders babble about DEFUNDING/DISBANDING THE POLICE & lockdowns/masks.

Sane citizens who’ve watched this unfold with MOUNTING HORROR as they realize they are under the control of IDEOLOGICAL LUNATICS who in their drive for power are keeping their citizens businesses closed while they let violent mobs run amok. AND THEN…

…a LIGHT shined in the darkness… Trump says he is going to come HELP THESE PEOPLE. It is **crystal clear** now that these mayors & governors are NOT going to change course. Or they WOULD HAVE by now.

So sane citizens waiting for help, waiting for SANITY to be restored, waiting for SAFETY to come back to their city, they **know** down to the marrow of their bones that Wheeler, Durkan, DeBlasio, Frey, Bottoms, Bowser are **never** going to do their real jobs.

Now all these sane citizens in the blue states are watching these weak Democrat Mayors YELL at President Trump: “DON’T YOU DARE!!! Don’t you DARE send federal officers to my city to make it safer while I defund/disband it’s police department & let these mobs run amok!”

Imagine 100 days of this. Trump sending Federal agents to these cities to get them back under control with the Democrat mayors & governors SCREAMING AND CRYING AND WHINING AND BITCHING endlessly in protest every single step of the way.

These optics are PRICELESS. PRICELESS, I tell you. The Democrats can’t hide the insanity of what they are doing, letting mobs & gangs tear their cities apart while they babble they’re in control & don’t need any help & whining Trump’s feds need to leave.

Anybody who tells you Democrats are WINNING the optics here is playing you. /end

Trump, Barr to expand anti-crime surge to several US cities

Anonymous1 Nov 2017 – 12:57:15 AM
Who controls the NG?
Why was the NG recently activated in select cities within the US?
Can the NG work in coordination w/ the marines?
Do conditions need to be satisfied to authorize?
What former President used the military to save the republic and what occurred exactly?
Biggest drop to ever be provided on Pol. Study and prepare. The masses tend to panic in such situations. No war. No civil unrest. Clean and swift.