The [DS]/[CB] are moving their agenda forward with the reset, they are preparing the world for what they want. Trump is preparing the transition away from the [CB]/[DS]. Trump has the upperhand, he will use their weapons against them. The patriots are in control, the elections are going exactly how they planned it, it must be shown to the people. If it was presented outright the public would not accept, the people must see the fraud. The [DS]/[CB] are preparing for their loss and so are the patriots. Trump just terminated Kreb who handled CISA. Chris Miller and Ezra Cohen Watnik took back control of special operations. All the pieces are almost in place. Why were ballpoint pens recommended before election day, but “Markers” NEEDED on election day? 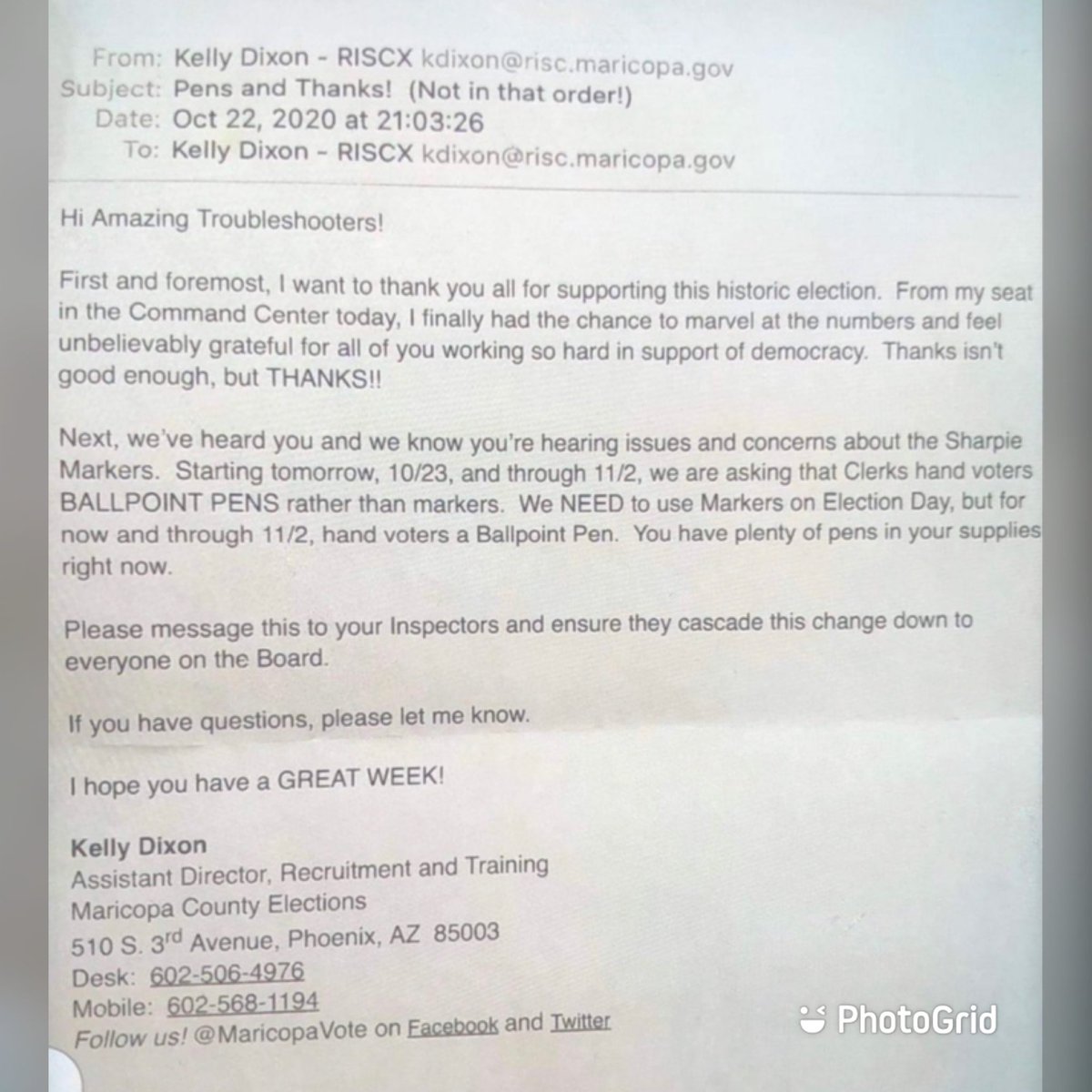 Sharpie Markers in particular are mentioned.
Could it have something to do with a marginal mark threshold set by the county?

Had this counting error not been discovered, Biden would have gained enough votes from this one batch alone to cancel out Trump’s gains from Fayette, Floyd and Walton.

We were limited to 1 monitor for every 10 counting tables and we were kept some distance from the tables. There is no telling what we missed under these unreasonable restrictions. The miscounted batch had been be signed off by two official counters.

The Georgia recount is a joke and is being done UNDER PROTEST. Even though thousands of fraudulent votes have been found, the real number is in matching signatures. Governor must open up the unconstitutional Consent Decree and call in the Legislature!

Was it a reference to a smear campaign that began 3 days before the election?

Either way, the mics muted briefly after the threats and all the sudden they had magically changed their minds.https://t.co/QfweRKDcFg

BREAKING: The Wayne County Board of Canvassers has just unanimously voted to certify the results of the election & called on Michigan SOS Jocelyn Benson to conduct an audit of the unexplained precincts in Wayne County that did not match.

Wrong! At first they voted against because there were far more VOTES than PEOPLE (Sad!). Then they were threatened, screamed at and viciously harassed, and were FORCED to change their vote, but then REFUSED, as American patriots, to sign the documents. 71% MESS. Don’t Harass! https://t.co/n5frpesHfD

In Detroit, there are FAR MORE VOTES THAN PEOPLE. Nothing can be done to cure that giant scam. I win Michigan!

The Pennsylvania Supreme Court has agreed to hear claims by President Trump’s campaign challenging approximately 8,000 mail-in ballots, which the campaign insists should be disqualified because they were improperly filled out.

. @SidneyPowell1 is referencing Trump’s EO. This is enormous and everything I prayed for. pic.twitter.com/W5az3e6ncu

The recent statement by Chris Krebs on the security of the 2020 Election was highly inaccurate, in that there were massive improprieties and fraud – including dead people voting, Poll Watchers not allowed into polling locations, “glitches” in the voting machines which changed…

…votes from Trump to Biden, late voting, and many more. Therefore, effective immediately, Chris Krebs has been terminated as Director of the Cybersecurity and Infrastructure Security Agency.

Christopher Krebs is a deeply respected cybersecurity expert who worked diligently to safeguard our elections. Instead of rewarding this patriotic service, the President has fired Director Krebs for speaking truth to power & rejecting Trump’s campaign of election falsehoods.

Shall we play a game?
[N]othing [C]an [S]top [W]hat [I]s [C]oming
NCSWIC
https://www.cisa.gov/safecom/NCSWIC
Who stepped down today [forced]?
https://www.cisa.gov/bryan-s-ware
More coming?
Why is this relevant?
How do you ‘show’ the public the truth?
How do you ‘safeguard’ US elections post-POTUS?
How do you ‘remove’ foreign interference and corruption and install US-owned voter ID law(s) and other safeguards?
It had to be this way.
Sometimes you must walk through the darkness before you see the light.
Q
trump added one more thing

The only thing secure about our 2020 Election was that it was virtually impenetrable by foreign powers. On that, the Trump Administration takes great credit. Unfortunately, the Radical Left Democrats, Dominion, and others, were perhaps more successful!

In other words, when the damning evidence emerges those guilty of fraud can’t redirect the blame overseas.

Fake news tried to lay the groundwork for this narrative in mid-Oct. https://t.co/aCLl5xEjW6 pic.twitter.com/FtFs7Up0pm

BUSTED! New Photos of Newsom’s Dinner Party Raise Questions Over How ‘Outdoors’ the Event Was

“He can celebrate birthday parties. But you can’t. He can dine on a $350 meal at one [of] California’s fanciest restaurants during the worst recession in generations. But you definitely can’t. Can you believe this? I can’t.” https://t.co/zN7JKfOo6S

PA gov announces new COVID rules, including wearing a mask in your house

BREAKING: Pfizer says a final trial analysis shows its Covid-19 vaccine is 95% effective, higher than the 90% previously thought, with no safety concerns, and it will seek FDA emergency use “within days.”

After one month the results were in. No statiscally significant difference in infection rates between the two groups.https://t.co/jHs3W4fg7a

“I am here today to announce that I have directed the Special Operations civilian leadership to report directly to me, instead of through the current bureaucratic channels.” A/SD Chris Miller pic.twitter.com/GOPtWsEcR9