Skip to content
Reports
October 27, 2020October 28, 2020 x22report
SPREAD THE WORD
Each economic sector is now forming a V, the economy is recovering. US home prices are moving up, manufacturing is coming back and durable goods are up. Next card is the GDP numbers, this is coming at the exact moment. WTO on deck. The MSM/[DS] they have now lost the battle over the ACB, she has been confirmed. Most of the states now have to count their ballots on election. [BO] gives a speech and he is panicking. Recording of [HB] has been released and it shows the laptop is not Russian disinformation. The DOJ is now pushing Sullivan to dismiss the case. Welcome to the 15th round. The punches will start to get harder.

Big GDP projected. Pelosi only looking to Bail Out badly run Democrat Cities. Tap, Tap, Taping us along. She has little interest in helping out the “people”.

They (his handlers) ripped Sleepy Joe off the stage yesterday when he got lost in a “mental fog”. A disaster. Very little reporting on this!

Yes, they did. Here is the video: pic.twitter.com/8KLXiz3GAD

The [DS] players are panicking, watch this video of OBama, listen to his voice, his facial expression, he is panicking

HE KNOWS ITS OVER
JUST LISTEN TO HIM pic.twitter.com/E66KhTqnaV

Panic sets in, Obama has lost his conman magic.  People can see clearly, they are awake, look at his face, his expression he is nervous, he is no longer in control

ACB was confirmed, The Senate Was The Target

Get The Video And Embed Code Here.

I guess if you shut down American production and the jobs that go with it you can really makes Hunters deals more valuable abroad… Supply & Demand https://t.co/YpKqqMIL5w

The DOJ has now written to Judge Sullivan to dismiss the case,

Flynn filing: DOJ response to Judge Sullivan’s order that the they verify gov’t exhibits in support of dismissal.

DOJ verifies the contents and ends with this:

“we trust and expect the District court to proceed with appropriate dispatch” and grant the motion to dismiss. pic.twitter.com/qfsK0r5wmk

The Silent Majority is no longer silent. Look at the line see Trump in Michigan, Do the MSM polls make sense that Trump and Biden are tied or Biden is leading.

The line to see @realDonaldTrump in Lansing, Michigan is 😳

Folks, the polls are wrong. pic.twitter.com/AHNLjQfmGv

After the Biden revalation yesterday we talked about how can I change my vote was trending on google, Trump tweeted the following

Strongly Trending (Google) since immediately after the second debate is CAN I CHANGE MY VOTE? This refers changing it to me. The answer in most states is YES. Go do it. Most important Election of your life!

Project Veritas does it again and Trump was right

“If I go to prison, I do not look cute in stripes…I will hate you forever.”

“You know on here you chose a Rep, not a Dem right?”#RiggedElection pic.twitter.com/npn4CbJzIi

“As the US conducts more that 1 million tests per day, there has been a new ‘surge’ in COVID-19 cases. In spite of this surge in new cases, deaths have remained relatively stable. This means the ‘case fatality rate’ is falling.”

Mass looting breaks out at clothing and shoe store during tonight’s BLM riot in Philadelphia. pic.twitter.com/htXN1rsbCk

At the Philadelphia BLM riot, a cop got hit or run over by a speeding vehicle. pic.twitter.com/S12XuEoNAi

Police Officers across the nation are advocating for TRUMP and rightfully so. The Democratic Party has abandoned police officers, encouraged violence and lawlessness. People are being murdered in Democratic run cities. @realDonaldTrump @DonaldJTrumpJr @EricTrump 🇺🇸🇺🇸🇺🇸🇺🇸🇺🇸🇺🇸🇺🇸 https://t.co/l29B4e18mA

No mention of the Philly riots on CNN’s homepage. They are going to try to memoryhole this thing in real time. BLM is going off script by rioting a week before the election. The media will have to work overtime to cover for them. pic.twitter.com/h3rivDXwZB 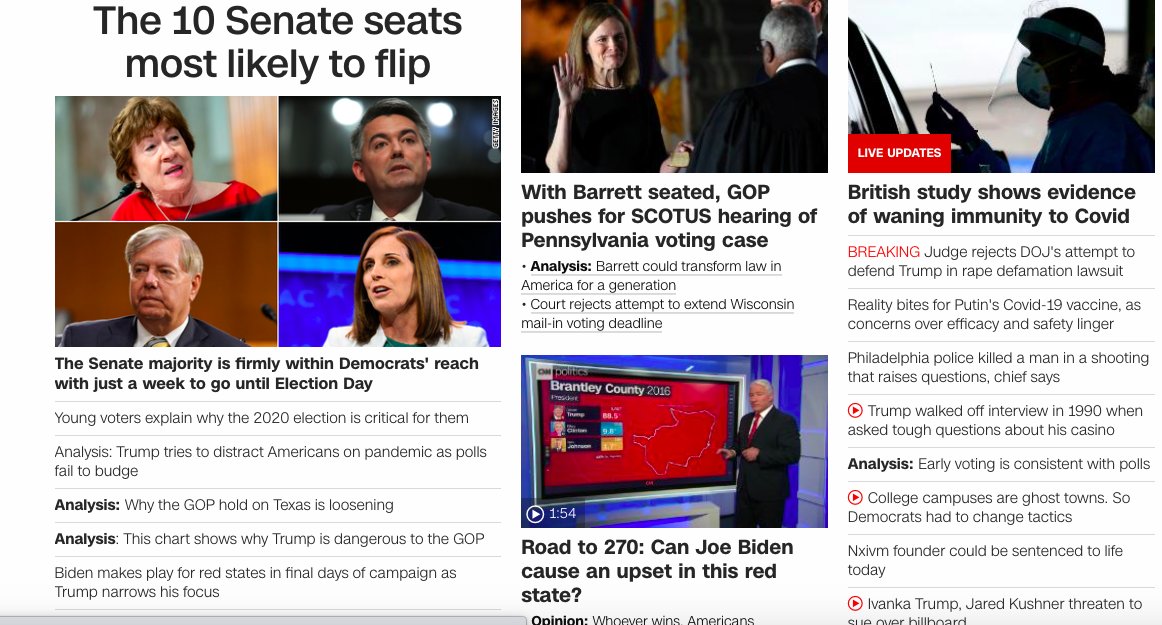 This is a reminder that God’s hand is on America. Born or naturalized an American, we have inherited an amazing land of liberty & prosperity. Keeping America a constitutional republic is now up to grassroots Americans. Vote 4 America, 4 Freedom, and 4 Patriotism 🇺🇸@lofly727