Ep 2907b – [Scare] Necessary Event, Trump: “Who Is Going To Enter The Trump Quicksand?” Ep 2907a – The Economy Imploding Will Be The Death Blow To [CB]/[WEF] & [D]s
Biden is continuing to tell lies about the economy and what he has done. The economy is a complete disaster. The policies that were put into place by the Ds continue to hurt the economy. Trump just debunked the entire climate agenda. DOJ pushing the narrative that bitcoin is used by criminals. The [DS] is now pushing the scare event. Not everything will be clean. Trump and the patriots know the playbook, countermeasures are in place. The [DS] is now pushing election interference and the Biden Admin have already assigned election officers and they are building the narrative that the elections for 2022 are not secure. Trump and the patriots are going to use this against them, this will boomerang because this will bring in to focus the 2020 elections. Trump sends a message that the [DS] might be making a move against him.

Net jobs created and lost in 7 years following these 3 actions by Clinton. 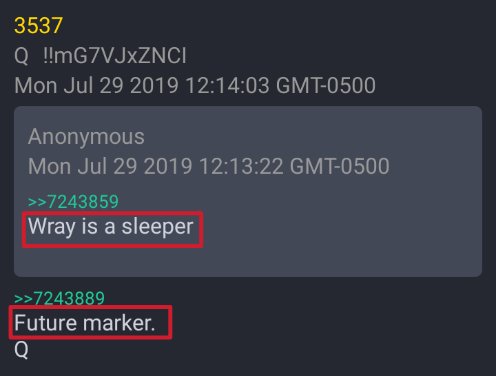 Konnech is in the cross hairs, but the DOJ and FBI bring up this case, look here not over there.

Just so we’re clear- the official Democratic party position now is that puberty blockers and sex reassignment surgery for kids is good. https://t.co/zTjLZ64dFY

Checking in on the POTUS… A man dressed as a woman has been given time w/ him to tell him what it's like to be a woman, at a time of record inflation, education through the floor, food insecurity and security threats to Americans and our way of life growing by the minute. https://t.co/oYWgL2CExY

“I had no problem w/ them until they…”

Time: “Americans are casting midterm ballots at record rates, which means the results might take longer”

So now the D, fake new will be pushing that the 2022 elections are not secure after they spent over 2 years telling us that the US elections are the most secure.

the FBI/DOJ agenda is obvious.

15 days before the 2018 midterm election the FBI promoted a “MAGA mail bomber”, Cesar Sayoc case, claiming the suspect mailed “energetic material that could become combustible when subjected to heat or friction.”

15 days before the 2020 presidential election, the FBI promoted the Gretchen Whitmer kidnapping case, claiming a group of Michigan extremists were foiled in their plot to kidnap the Michigan Governor.  Inside the plot the FBI had used more than a dozen agents, informants and sources to literally construct the events and facilitate the claims.

Today, not coincidentally a repeat of 15 days before the 2022 midterm election, once again the FBI/DOJ is promoting an election interference narrative:

Trump and the patriots are about to trap them in the election narrative.

A judge in New York ruled that voting by mail over fears of the coronavirus is unconstitutional.

Dr. Eric Coomer who is responsible for the strategy and Security at Dominion Voting Systems.

In 2016 Coomer told the Illinois States Board of Elections that it was possible to bypass election systems software.

This then is the SECOND VIDEO of top Dominion executive explaining to elections officials how to alter votes with the Dominion machines!

This was a separate demonstration in the Chicago area (notice he is wearing a dark jacket and is without the wrist protector.)

🤡2017 DR. ERIC COOMER EXPLAINS HOW TO ALTER VOTES IN THE DOMINION VOTING SYSTEM
🙄THIS SEEMS ABSOLUTELY RIPE FOR FRAUD
👿“Don’t worry about the election, Trump’s not gonna win. I made f**king sure of that!” – Dr. Eric Coomer VP of US Engineering for US Dominion Voting Company pic.twitter.com/dEuPIzGOlC

Is the [DS] about to make a move