The Biden administration is now getting caught up in lies. The people are no longer believing the promises. Illegals are set to receive stimulus money. Biden is preparing to spend another 3 trillion for infrastructure.The Fed is now panicking, says bitcoin is like gold, not money. The [DS]/Ds are now in self destruct mode. Trump has now set everything up and the the MSM/Ds are self destructing over their policies. Sometimes people need to see the truth to understand what is really happening. This is just the first stage. The [DS]/Ds are getting ready to pull the trigger and Trump is just waiting. Treason, sedition, election fraud and crimes against humanity will be exposed to the world. Trump has control of the board, watch his next move. Ep 2433b – Self Destruction Will Immediately Show The World The TRUTH, It Had To Happen Ep 2433a – [CB] Is Panicking Over Bitcoin, Bitcoin Is Just Like Gold

Millions of illegal immigrants set to get $4.38B in Biden COVID cash

Joe Biden’s open border polices helped smugglers earn $14,000,000 per day in February Meanwhile, his economic policies gave struggling Americans one $1,400 check in March Is this what “Building Back Better” looks like?

Via The New York Times:

The spending proposals, which may be offered in separate legislative pieces, include:

Programs meant to increase women’s participation in the work force

What is the U.S. Treasury Hiding?; Blocks Access to Data About Economy

When you click on the link provided, this is what you see: 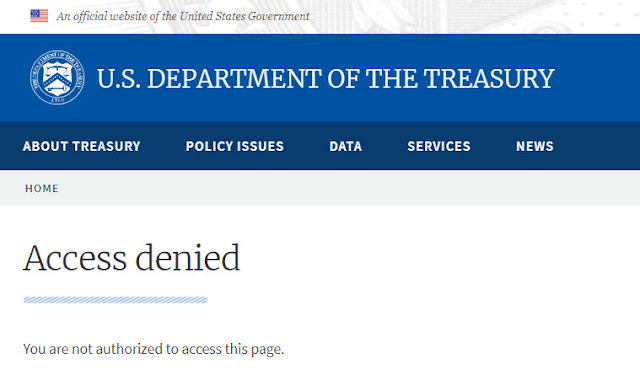 GOP Rep. Tom Reed apologizes after misconduct claim, says he will not run for reelection

ABC’s Martha Raddatz to illegal alien who crossed the border: “Would you have tried to do this when Donald Trump was president?”

Raddatz: “Did you come here because Joe Biden was elected president?”

These photos were taken within the last few days. There are eight pods with eight cells each in the facility. At any given moment there are an average of 3,000 people in custody here. The illegal immigrants are separated by age or physical size depending on room. pic.twitter.com/kFmZgTG2Iv

Fifty were COVID positive in these cells over the last few days. There have been multiple sexual assaults, normal assaults and daily medical emergencies.

The crisis at the border is so bad that Biden is denying the press access. Why is @AOC—who once staged a photoshoot to draw attention to the “concentration camps” under Trump—completely silent?

Reporter: Why are illegal immigrants now getting hotel rooms when the National Guard in DC were left to sleep on the ground in parking garages?

BREAKING: Project Veritas’ Insider working at the Department of Homeland Security leaked internal email alerting that migrant caravans are forming at a pace not seen since November 2018

There is none’: Trump slams Biden administration plagued by transparency questions

James O’Keefe also reported that 50 of the children tested positive for the coronavirus.

When it came to securing American freedom abroad, we treated the world as it was, not as we wished it to be. When the time came, we led and were TOUGH.

This is not a game.
They want us divided.
Last posts [self destruction] will immediately show the world the TRUTH.
Instructions will be sent on how to preserve offline.
You didn’t think this was simply about words did you?
We have it all.
Coming soon to a theater near you.
Q

Anonymous 06/29/2018 00:25:43 ID:ffd993
Archive Bread/Post Links: 1952036 / 1952748
Direct Link: 1952748
>>1952583
I almost hope they don’t ask. It would be fun to watch them try to manage the spin when 90% of the country is aware of you and all that you’ve been shining a light on, while the MSM still can acknowledge it.
I can see them squirming now..
>>1952748
It must happen.
Conspiracy no more.
Think of every post made.
It would force us to prove everything stated to avoid looking crazy, correct?
What do they fear the most?
Public awakening.
If they ask.
They self destruct.
They know this is real.
See attacks.
The build is near complete.
Growing exponentially.
You are the frame.
You are the support.
People will be lost.
People will be terrified.
People will reject.
People will need to be guided.
Do not be afraid.
We will succeed.
Timing is everything.
Think Huber.
Think DOJ/FBI reorg.
Think sex/child arrests / news.
Think resignations (loss of control).
How do you remove evil in power unless you reveal the ultimate truth?
It must be compelling to avoid a divide (political attack/optics).
We are the majority (growing).
WW.
Sheep no more.
TOGETHER.
Q

24 thoughts on “Self Destruction Will Immediately Show The World The TRUTH, It Had To Happen – Ep. 2433”