Boris Johnson is preparing the trap for the EU and the Elite, he proposed the same plan as the EU and they rejected it. The US unemployment fell to 3.5% and the Hispanic has fallen to an all new low of 3.9%. The [CB] system is imploding and now we can see the toll it is taking on the everyday person, this is what happens when the [CB] system fails. The [DS] is trapped, the patriots planned this from the very beginning and no matter what the [DS] does the patriots win. Pelosi’s son has connections to Ukraine. HRC wants to go above the law to remove Trump. The whistleblower most likely violated law when they did not reveal that they talked to a Schiff staffer. The entire fake whistleblower complaint is falling apart. The patriots hold all the cards, they are boxed in. Trump says the WH will not cooperate until the House votes on impeachment, Boom.

Here in the US Trump and the patriots are keeping illusion alive. The Unemployment rate fell, to 3.5% , Trump tweeted out the following

Breaking News: Unemployment Rate, at 3.5%, drops to a 50 YEAR LOW. Wow America, lets impeach your President (even though he did nothing wrong!).

How bad is a [CB] system, just look at the millennials are doing

The [DS] have now failed on all fronts, the are struggling to keep the impeachment narrative going, the only strategy they have is for the MSM to continually repeat it, but this will not work, the propaganda will not stand up to the evidence, facts and the truth, the patriots planned this from the beginning, if they have an impeachment vote and it is voted down the patriots win, if the vote is to impeach the patriots win, we will be talking about this a little later in this report, but first maxine waters is panicking, she has a problem with people harrasing her as she walks down the street.

See the video below:

Then we have Elizabeth Warren in Reno, she came off the plane and she was met by Trump supporters telling don’t impeach, remember when Q said that soon they won’t be able to walk down the street

Many in Power Worship the Devil

At some point it will not be safe for them to walk down the street.
The World is WATCHING.
Q

Then we have Brennan, he is now calling on the republicans of course its those that are corrupt and have the most to lose to stop Trump, everything he tried has failed, he is becoming desperate.

Brennan tweeted out the following

Press conference with Finnish President shows @realDonaldTrump is a national disgrace who deserves impeachment, conviction, & ouster from office. Republicans in Congress must abandon him now if they care about our country & have any hope of salvaging a political future for GOP.

And then we have HRC, the DS players are panicking, the panic meter is off the charts, she tweeted out the following

“If the impeachment provision in the Constitution of the United States will not reach the offenses charged here, then perhaps that 18th-century Constitution should be abandoned to a 20th-century paper shredder!” —Rep. Barbara Jordan, 1974 pic.twitter.com/TkF3MdYWsL

So what is here message

The hell with the  constitution. If we need to break the law to remove Trump we must do it.  Why are they afraid? They know what’s coming.

BREAKING: Nancy Pelosi’s Son Was Exec At Gas Company That Did Business In Ukraine

Rosie Memos tweeted out the following

Holy sh*t in August 2017 a complaint was filed with FEC about DNC and Chalupa accepting assistance from Ukrainian foreign nationals during election. It was filed by..
Mathew Whitaker🔥https://t.co/Ye41FdWN9I pic.twitter.com/KiHMi4dGGp 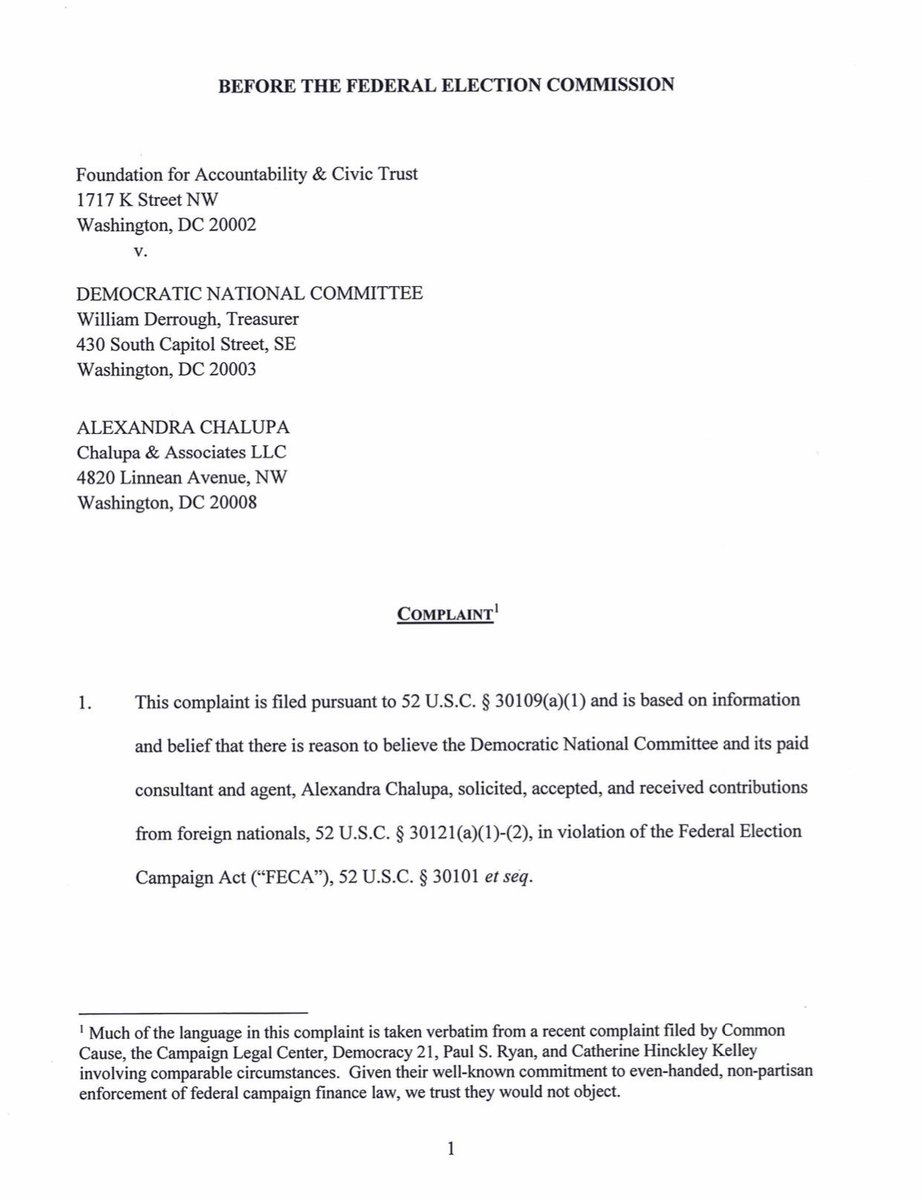 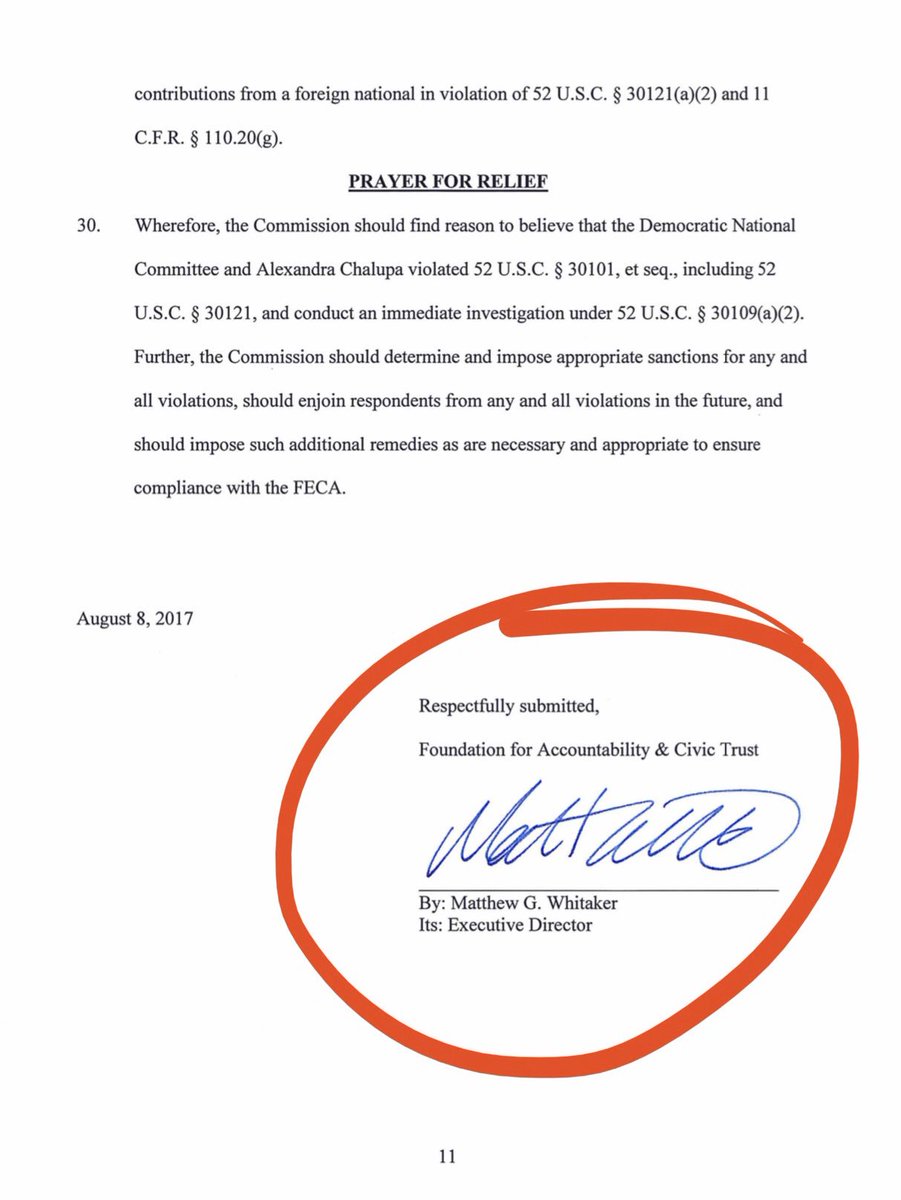 We are simultaneously fighting the Fake News Media and their partner, the Democrat Party. Always tough to beat the “Press,” but people are beginning to see how totally CORRUPT they are, and it makes our job a whole lot easier!

It is no coincidence that a few bad actors within the intel community engage in a series of desperate, bad faith, and poorly sourced leaks to try and undermine the Trump administration—right as Bill Barr and John Durham get closer to releasing their investigation into FISA abuse

The patriots are prepping the narrative for the Delcass, that is what this is all about, but as we know the DS is trying to stop this anyway they possibly can, so what did they do they brought out another leaker who heard something 2nd hand.

ANOTHER LEAK: IRS ‘Whistleblower’ Using Second-Hand Info Claims Treasury Appointee May Have Tried to Interfere in Audit of Trump or Pence

A reminder to federal officials:

There is no limit on the number of individuals who can use the whistleblower statute.

If you think you were involved in unlawful activity as a result of a directive from Mr. Obama or Mr. Brennan, now is the time to report it. https://t.co/RNMymRVmZP

Now this new form can be used against OBama, Biden,Brennan, Clinton, Biden, because they can say they heard it from someone else
But we need to go back in time, OBama and Clinton Objected To How Whistleblower Law Was Used To Get Trump

We need to recognize that Trump asking China and Ukraine to investigate Biden is not a crime, doesn’t matter how many times the MSM continually repeats it, it is not

As the President of the United States, I have an absolute right, perhaps even a duty, to investigate, or have investigated, CORRUPTION, and that would include asking, or suggesting, other Countries to help us out!

Brilliant! President Trump Reminds Reporters He was Investigated by Obama in 2016 Campaign! – And His Admin Is Investigating Obama Spying Today! (VIDEO)

We are now getting more and more information about the whistleblower, Paul Sperry tweeted out the following

BREAKING: The whistleblower is a registered Democrat & CIA analyst who was detailed before the 2016 election to the Obama White House,where he worked on the NSC’s Ukraine desk & met w anti-Trump Ukrainian officials before being sent packing by the Trump NSC & becoming disgruntled

“I think it’s outrages that a Whistleblower is a CIA Agent.” Ed Rollins @FoxNews

The form requires whistleblowers to attest under penalty of perjury that they have neither misstated nor concealed material facts in their complaints.

“I certify that all of the statements made in this complaint (including any continuation pages) are true, complete, and correct to the best of my knowledge and belief,” whistleblowers are required to attest. “I understand that, pursuant to 18 U.S.C. 1001, a false statement or concealment of a material fact is a criminal offense punishable by a fine of up to $10,000, imprisonment for up to five years, or both.”

Now Trump mispelled a word, did he do this on purpose, but when we do a search of Q’s posts we come across post 3028

[Pelosi] pull threat to impeach?
Effort to prevent DECLAS?
Was the ‘impeachment’ threat real?
TALKING POINTS TO SATISFY LOONY LEFT [SHEEP DO NOT THINK FOR THEMSELVES] BASE?
TALKING POINTS MEANT TO ‘PROJECT OUTRAGE’ ACROSS AMERICA [USING FAKE NEWS BLOW-HORN] TO JUSTIFY FAKE INVESTIGATIONS AND TAKE IN DONOR SUPPORT?
Impeachment requires FACTS.
Impeachment requires 2/3 vote of the SENATE.
PROPAGANDA ARM OF [D] PARTY [FAKE NEWS] IS LOSING CONTROL OF THE NARRATIVE.
THE TRUTH WILL ALWAYS WIN.
TRANSPARENCY & EQUAL JUSTICE UNDER THE LAW.
SAVE AMERICA.
Q

Ukraine’s top prosecutor said  that his office is “conducting an audit” of cases that have been previously investigated and closed, including the probe involving the energy giant Burisma, where Hunter Biden had served on the board.

Silence Dogood makes all the connections with his twitter thread.

2/ The Vatican receives money from the Andrew W. Mellon Foundation and the Mellon Family. The “Mellon Project” at the Vatican Library was the result of one of these donations.

3/ Les Wexner of course is connected to Jeffery Epstein.

Now the Mellon Foundation was formed by the Mellon Family in honor of Andrew W. Mellon. Other companies connected to the family are Alcoa, Gulf Oil, Westinghouse, Rockwell, and most importantly: HEINZ.

4/ Heinz was created & prospered under the guidance and finances of the Mellon Family.

Heinz uses Rosemont Capital as an investment vehicle for the family.

6/ The same John Kerry who married into the Heinz Family, the same Heinz family who happen to own Rosemont Capital & participate in Rosemont Seneca Partners with Biden, Archer, & Bulger.

So there you have it. Ukraine-Epstein-Vatican all through the Mellon, Wexner, & Heinz’s.

7/ Now all these traitors went on to sell off US strategic assets through their Joint venture with the CHINESE GOVERNMENT in Bohai Harvest RST (BHR). BHR went on to partner with Aviation Industry Corporation of China, a Chinese Government owned company, to purchase……

8/ Henniges Automotive which is the primary producer of engine vibration dampening strategic assets, RESTRICTED UNDER NATIONAL SECURITY. The only way the chinese could buyout this auto firm was to get approved by the US administration in office, the Obamas.
☕✝️

Now we need to remember that Trump signed an executive order back in  December 21, 2017, what was the EO

This is military planning at its finest, this was strategically planned out, Trump sent out the call, vote on impeachment, he is pushing the Ds to do it, if the vote is no, the block is gone and and they can’t say Trump is releasing declass the declass as a political hit. If the House votes yes the senate was the key, why?

Impeachment? Bring it on. Trump can put the Dems on trial in the Senate