The [CB] is now losing control, the people are seeing the prices increase. The fake news needs to report on it because they people are seeing it first hand. The [CB] is now losing control of the narrative, they will become desperate and push their agenda, prepare for a [FF].  The Patriots are in total control. The cure is spreading WW and nothing can stop this. The fake news and the Biden admin are trying to explain what is happening in Cuba but people know they are lying, it’s not about covid or the vaccine, it’s about oppression. Trump lawsuit against big tech is going to change everything, he waited for the corrupt politicians to commit the crime with big tech and once the crime was completed they sprung the trap so everyone could see. The gov in Cuba is preparing a communication blackout, expect the same in the US when the information about election fraud, treason, sedition and crimes against humanity starts to roll out. JUST IN – Biden allied groups, including the DNC, plan to engage fact-checkers and work with SMS carriers to “dispel misinformation” about vaccines that is sent over social media and text messages (Politico)

REMINDER: the same government that thinks rural Americans can’t photocopy their ID wanted them to have a vaccine passport smartphone app to be able to go to the store.

Remember, the Cubans are not walking around with the Chinese, Russian or Iranian flag as they march for their freedoms.

Our flag symbolizes freedom all around the world & I will fight to ensure that it ALWAYS stays that way.

Psaki is asked a question about Cuba.

This is the proper framing for Cuba stories. Cubans are not protesting COVID cases or “food shortages” — the latter has been happening for decades. They are demanding an end to six decades of communist tyranny.

Department of Commerce Announces the Addition of Huawei Technologies Co. Ltd. to the Entity List https://t.co/m89LRXAata

On May 15th, US President Donald Trump signed an executive order barring US firms from using telecom gear from sources the administration deems national security threats.

“I further find that the unrestricted acquisition or use in the United States of information and communications technology or services designed, developed, manufactured, or supplied by persons owned by, controlled by, or subject to the jurisdiction or direction of foreign adversaries augments the ability of foreign adversaries to create and exploit vulnerabilities in information and communications technology or services, with potentially catastrophic effects, and thereby constitutes an unusual and extraordinary threat to the national security, foreign policy, and economy of the United States.  This threat exists both in the case of individual acquisitions or uses of such technology or services, and when acquisitions or uses of such technologies are considered as a class.”

The Chinese telecom giant also can’t implement its 5G system in the US.

“This action by the Commerce Department’s Bureau of Industry and Security, with the support of the President of the United States, places Huawei, a Chinese owned company that is the largest telecommunications equipment producer in the world, on the Entity List. This will prevent American technology from being used by foreign owned entities in ways that potentially undermine U.S. national security or foreign policy interests,” said Secretary of Commerce Wilbur Ross. “President Trump has directed the Commerce Department to be vigilant in its protection of national security activities. Since the beginning of the Administration, the Department has added 190 persons or organizations to the Entity List, as well as instituted five investigations of the effect of imports on national security under Section 232 of the Trade Act of 1962.”

“President Trump is acting once again to protect U.S. national security. This Executive Order addresses the threat posed by foreign adversaries to the nation’s information and communications technology and services supply chain,” said Secretary of Commerce Wilbur Ross. “Under President Trump’s leadership, Americans will be able to trust that our data and infrastructure are secure.” 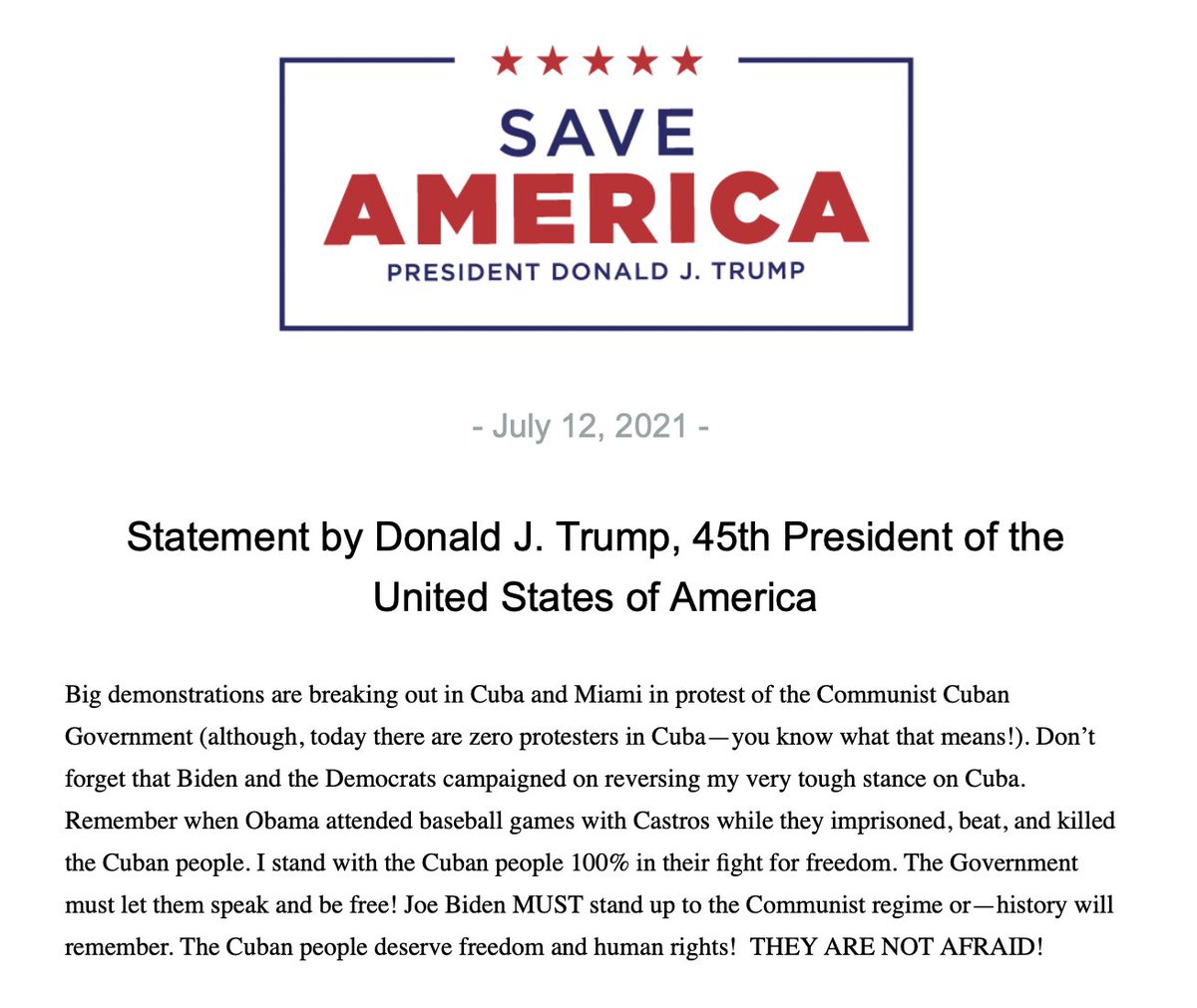 Mary W. Maxwell, Trump’s Lawsuit against Twitter Is a Masterpiece. It Will Save Us!

Here is the gist of the case, in Nine Points:

Point #1.  As everybody knows, Twitter chopped off the communication between (then) President Donald J Trump and his 88.9 million Twitter followers.

Point #2.  They did it by way of Section 230 of the Communications Decency Act, 1996,  that protects from liability the social media companies that may censor someone unconstitutionally.

Point #3   (e.g., Twitter and Facebook) were furnished with this trick, in Section 230, IN ORDER TO MAKE POLITICAL CENSORSHIP HAPPEN.

Point #4. Members of Congress (including Adam Schiff  bullied Jack Dorsey to do the de-platforming, against his better judgement.  They threatened him with all sorts of loss of business and personal embarrassment – as is their wont.

Point #5. “Legislators” made known their desire to prevent publication of “COVID-19 “misinformation,” including the lack of safety and efficacy of hydroxychloroquine and the use of face masks,” and “Questioning the integrity and results of the 2020 Presidential election.”

“Point #6: The CDC has publicly stated that it works with “social media partners,” including Twitter, to “curb the spread of vaccine misinformation.” In a document dated October 11, 2019, the CDC expressly stated that it was “engaging . . . partners” to “contain the spread of [vaccine] misinformation” and specifically states that the CDC would “work with social media companies” to that end.”

“Point #7. By banning Plaintiff, Defendants have made it more difficult to communicate directly with the American public. Our national discourse is becoming immeasurably more altered and one-sided on race, medicine, the election process, the economy, immigration, etc.”

“Point #8. In censoring the specific speech at issue in this lawsuit and in deplatforming Plaintiff, Defendants were acting in concert with federal officials, including officials at the CDC and on the Biden transition team.  As such, Defendants’ censorship activities amount to state action.”

“Point #9.  Dorsey and Twitter acted to censor other medical opinions that did not uphold that narrative of Dr. Fauci and the CDC, which took on both a political and medical nature, given the interconnection between government policy and pending and science.”

Trump is not the only plaintiff.  Also in the case are the American Conservative Union, a single litigant named Linda Cuadros, and what is called the Putative Class, a potential huge number of people (maybe some from Australia? I know at least one dual US-Oz citizen) whose accounts were suppressed for not meeting community standards.

How did SA welcome POTUS during his trip?
Why was this historic and not covered by MSM?
How did SA welcome BO during his trip?
How did SA welcome HRC during her trip?
Why is this relevant?
Not suggesting SA is clean by any means but they play a role in this global game of RISK.Combine all posts and analyze.
The questions provide answers.
Remember, information is everything, the flow of information is no longer controlled by the MSM but by you/others.
Hence, why we are dedicating ‘critical’ time to distribute crumbs which can be followed in greater detail to paint the entire picture once more information is released.
Why has POTUS dedicated so much time into labeling the MSM as fake news?
Why is this relevant?
We are fully prepared that all social media will be shut down to prevent the spread of this information (i.e. POTUS’ Twitter etc. and/or mass censoring).
Sealed Federal orders pre-submitted as prevention and masked as ‘in general’ (though that does not account for rogue agents/programmers within).
Dates (impending actions) are deliberately provided for authenticity.
Alice & Wonderland.

Please refer back and collect my crumbs.
As discussed, we’ve anticipated the Twitter and other social media blackouts.
Rogue agents/programmers.
Per sealed Federal orders, we quickly tracked and reinstated.
Expect outages periodically (infiltrated).
If this doesn’t signal what I’ve been saying I don’t know what will.
Q
TAKE A LISTEN

https://www.youtube.com/watch?v=O1l-nR1Apj4
VIDEO We aren’t going to take it anymore
Q
TAKE A LISTEN