The economy is now opening up in the US and around the world. With the rates dropping more people will be able to enter the real estate market, the automobile market, and college market, more businesses will be able to borrow to expand business and pay employees. The world economy is now being reconfigured, the WTO director has now resigned. The [DS]/MSM is now losing the battle with the event, people, doctors are now waking up and speaking out. The people are demanding that the states reopen. The [DS]/MSM are trying to spin the Flynn story, they are being led down a path that will trap them. The swamp is deep and wide but it is now being exposed, the shadow presidency and government are being forced into the light, patriots are in control, the truth will prevail.

The unconfirmed, acting DNI using his position to criminalize routine intelligence work to help re-elect the president and obscure Russian intervention in our democracy would normally be the scandal here…

.@realDonaldTrump’s propaganda & disinformation machine, which operates according to a despot’s playbook, is the most aggressive & odious in history. It far surpasses even Russia’s ability to trample the truth, harm U.S. security, & undermine America’s reputation worldwide.

Just a reminder, the last time the Lawfare types filed an outraged amicus brief with a court…

…it was with the FISA Court, trying to claim that @DevinNunes memo was false for claiming FISA abuse 🤦🏻‍♂️

“[C]ourts are essentially passive instruments of government.” United States v. Samuels, 808 F. 2d 1298, 1301 (CA8 1987) (Arnold, J., concurring in denial of reh’g en banc)). They “do not, or should not, sally forth each day looking for wrongs to right. [They] wait for cases to come to [them], and when [cases arise, courts] normally decide only questions presented by the parties.” Ibid.

Reminder: Lying under oath to Congress is a crime. It would appear @samanthajpower has some explaining to do. https://t.co/abmT5qkHiu

“Sally Yates first learned about the Flynn wire­tap­ping from no less than Pres­i­dent Barack Obama in a Jan. 5, 2017, Oval Of­fice meet­ing.

At least one of the un­maskers must have told Mr. Obama.” #Obamagate https://t.co/5GWXzJC2km

The dates match up to his chief of staff

The Patriot Act was begotten of the most unpatriotic of ideas – that liberty can be exchanged for security.

The history of the Patriot Act shows that the exchange is a poor one. As our liberty wanes and wastes away, we find that the promises of security were an illusion.

The seizure represents a significant escalation in the investigation into whether Burr violated a law preventing members of Congress from trading on insider information they have gleaned from their official work.

To obtain a search warrant, federal agents and prosecutors must persuade a judge they have probable cause to believe a crime has been committed. The law enforcement official said the Justice Department is examining Burr’s communications with his broker.

Sen. Dianne Feinstein’s office confirms she answered questions from the FBI and handed over documents about her husband’s stock trades.

I don’t know the so-called Whistleblower Rick Bright, never met him or even heard of him, but to me he is a disgruntled employee, not liked or respected by people I spoke to and who, with his attitude, should no longer be working for our government!

So, Newsom is threatening martial law if citizens don’t comply with shelter in place. You wanna know what the COVID19 mortality rate in CA is? 0.00006925. That means 99.999931% of us are forced to remain sheltered, have political campaigns and businesses shuttered. No more!

The Great State of Wisconsin, home to Tom Tiffany’s big Congressional Victory on Tuesday, was just given another win. Its Democrat Governor was forced by the courts to let the State Open. The people want to get on with their lives. The place is bustling!

President Donald Trump said in an interview Thursday he is already mobilizing the military to help distribute a coronavirus vaccine as soon as it is developed.

Good numbers coming out of States that are opening. America is getting its life back! Vaccine work is looking VERY promising, before end of year. Likewise, other solutions!

The top Republican on the House Intelligence Committee said criminal referrals are coming for members of former special counsel Robert Mueller’s team who investigated Russian interference in the 2016 election.

“We’re doing a large criminal referral on the Mueller dossier team that put together a fraudulent report — that knew there was no collusion the day that Mueller walked in the door,” the California Republican added. “They set an obstruction of justice trap. There’s no doubt in my mind that we will make a conspiracy referral there.”

Nunes called for the lead Justice Department lawyer in the Flynn case to be investigated.

“That attorney had to know those documents existed, had to know they were working with a falsified 302 — that’s a very simple criminal referral,” he said, in reference to alleged suppression of exculpatory evidence.

The congressman also said he will ask the Justice Department to investigate possible obstruction of justice of the congressional inquiry into the Russia investigation.

“I want to see all of them held accountable for this,” he added.

The Depth of the Swamp Should Scare Every American

Q!!Hs1Jq13jV613 May 2020 – 8:18:52 PM
The point to understand.
They [knowingly] unmasked [attached names to] AFTER POTUS won the election of 2016.
They thought they could prevent the exposure of this information and remain protected.
Why did they believe this?
What ‘insurance’ did they have?
Infiltration of US GOV?
This fact alone should scare every American.
SHADOW PRESIDENCY.
SHADOW GOVERNMENT.
It took this long for a reason.
Q
The [DS] thought everyone was in place, they had nothing to worry about, everything they did would not be discovered and made public, they were wrong. Trump patriots needed to clean the house out, remove the DS players, remove all the blocks.

https://twitter.com/antlive73_am/status/1260729778983837696📁
Attention QAnon do this asap block anything REUTERS from ur fb & Twitter MAKE IT VIRAL @BardsOfWar@rexxurection@EYEDROPMEDIA@QAnon_Report@EyesOnQ

Q!!Hs1Jq13jV614 May 2020 – 11:44:58 AM
https://twitter.com/tomselliott/status/1260907153235365888📁
Clapper, asked whether he’ll accept Sen. Graham’s call to testify: “Given my age demographic, I’d be happy to come after I’ve been vaccinated for Covid-19 … I don’t particularly want to put my life or my wife’s in jeopardy” [says remote testimony possible]
Is this about the virus OR ABOUT PROTECTING THEMSELVES?
>Mail-in-Ballot push [Election]
>[D] State bailout(s) push
>Refusal to testify re: fear of COVID-19
WHO BENEFITS THE MOST?
Q 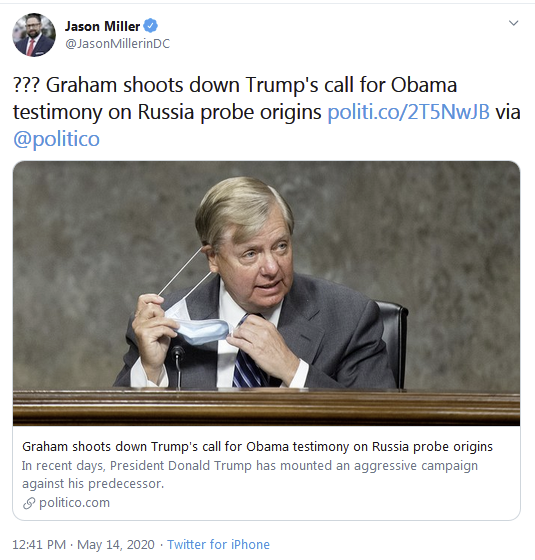 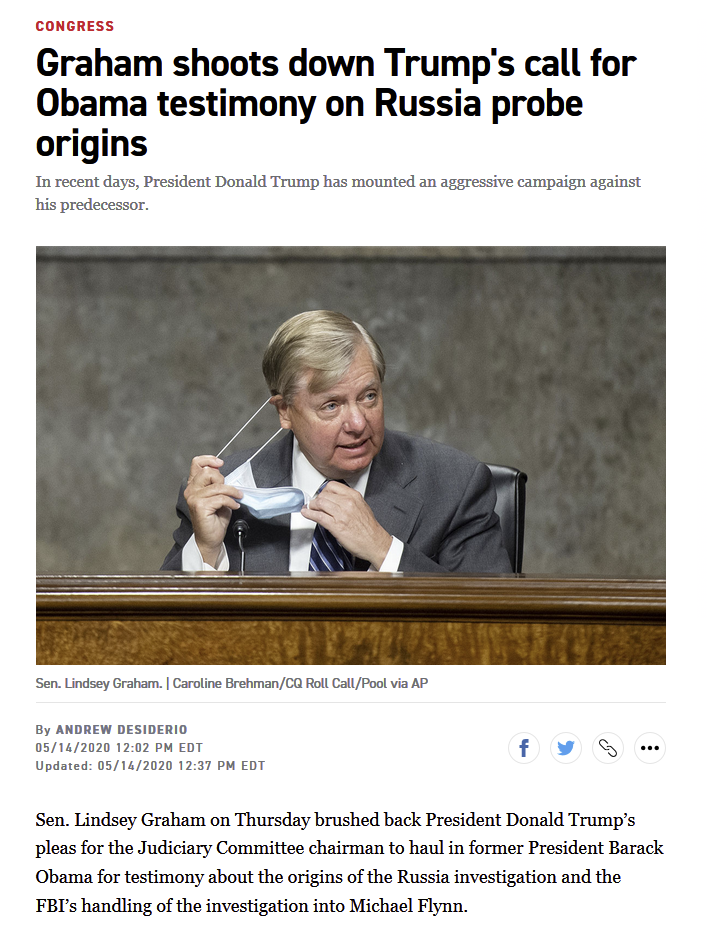 Lindsey Graham will give Judiciary chairmanship back to Chuck Grassley

Senate Republicans will go through another game of musical chairs in the next Congress.

Sen. Lindsey Graham (R-S.C.) plans to hand the chairmanship of the Senate Judiciary Committee back to Sen. Chuck Grassley (R-Iowa.) in the next Congress.

Graham took over the panel this year from Grassley, who left to chair the Senate Finance Committee.

Worth remembering.
Think Chess.
Do you attack the KING in the beginning or middle-to-end?
QUEEN protects KING?
Q

If I were a Senator or Congressman, the first person I would call to testify about the biggest political crime and scandal in the history of the USA, by FAR, is former President Obama. He knew EVERYTHING. Do it @LindseyGrahamSC, just do it. No more Mr. Nice Guy. No more talk!

The more pieces there are on the board, the less safe the king becomes. It is especially dangerous for the king when the enemy queen is still on the board. When discussing the king’s role in chess strategy, we are mostly interested in how to keep him safe from attack. Only in the endgame, when there are few pieces left on the board, is it safe for the king to emerge from his fortress and join in the attack, but we will look at the role of the king in endgames in a later tutorial.

3 thoughts on “The Depth Of The Swamp Is Exposed,The Shadow Government Is Forced Into The Light – Episode 2174”