Ep 2669b – The Groundwork Has Been Laid, Pieces Are In Place, Think Mirror Ep 2669a – People Are Figuring It Out, This Will Spread Through The Economy As the economy implodes the [CB] has no place to hide, the people will experience what real inflation is like.As time goes no this will spread and get worse and people will seek an alternative. This is already happening and it will spread across the globe. The [DS] is panicking, they are fighting for their lives. They know they lost but they are pushing everything they have at the patriots in the hopes that the patriots will make a bad move. Trump is putting all the pieces in place the groundwork has been laid. Everything the [DS] has done to Trump is actually what they have done, think mirror, payback is coming. Trump is about to gain incredible amount of leverage, controlling the flow of information is key. Tick Tock.

So it was with one of this president’s earliest embarrassments, “Operation Fast and Furious,” designed to help the Bureau of Alcohol, Tobacco, Firearms, and Explosives (ATF) dismantle drug cartels operating inside the United States and disrupt drug-trafficking routes. Instead, it put into the hands of criminals south of the border some 2,000 weapons, which have been used to kill hundreds of Mexicans and at least one American, U.S. Border Patrol agent Brian Terry.

New restrictions have been announced today (January 4) which will affect double vaccinated and those who have recovered from Covid, who will now need to provide a daily negative test in order to enter many establishments in Hamburg, Germany.

I wonder if they are going to quietly change the vaccine definition back to what it was.

The Federal government is blocking treatments in Florida

COVID-19 isn’t the flu or common cold, yet their symptoms can be strikingly similar. But there’s one way to know the difference.

New York state will start breaking down its hospital figures between “with” and “because” of COVID-19, Governor Kathy Hochul says.

“We’re going to start asking some questions .. is that person in the hospital because of COVID” or because of a car crash? pic.twitter.com/ifqXV4OBVj

Why is this happening now, the covid hysteria is coming to and end, testing is changing where they will now separate the flu from covid, This is why you see the backtracking and trying to get ahead of what is coming

We should deeply reflect about these insights from our expert pic.twitter.com/D7tCGtJVXh

Texas Gov. Greg Abbott tells his National Guard Biden is NOT their ‘commander-in-chief’ as he sues the White House over ‘unconstitutional’ military vaccine mandate

Jen Psaki: Biden’s Jan. 6 speech will nail Trump over his ‘singular responsibility’ for ‘chaos and carnage’

In just a few months, the entire narrative of January 6 will collapse amid the release of secret surveillance video, FBI interviews/documents, and the feds most bogus charge, obstruction of an official proceeding.

You heard it here first 🇺🇸

Did Wray’s FBI assets identify themselves with orange (get it?) neon caps and electrical tape?

These folks are missing from FBI most wanted list and @SeditionHunters target list. None, from what I can tell, have been arrested or charged.https://t.co/OAuYBnujXn

Not just embarrassing and cowardly and an act of obvious groveling, a total lie.

Cruz is mimicking Wray and Biden and Garland. He just gave Garland’s prosecutors more ammo in charging and sentencing motions.

Senate GOP is beyond worthless https://t.co/deT0J0YGtr

People always reveal who/what they really are. Some take longer than others to do it. We see you Ted. We *really* see you, now.  Through fresh eyes. 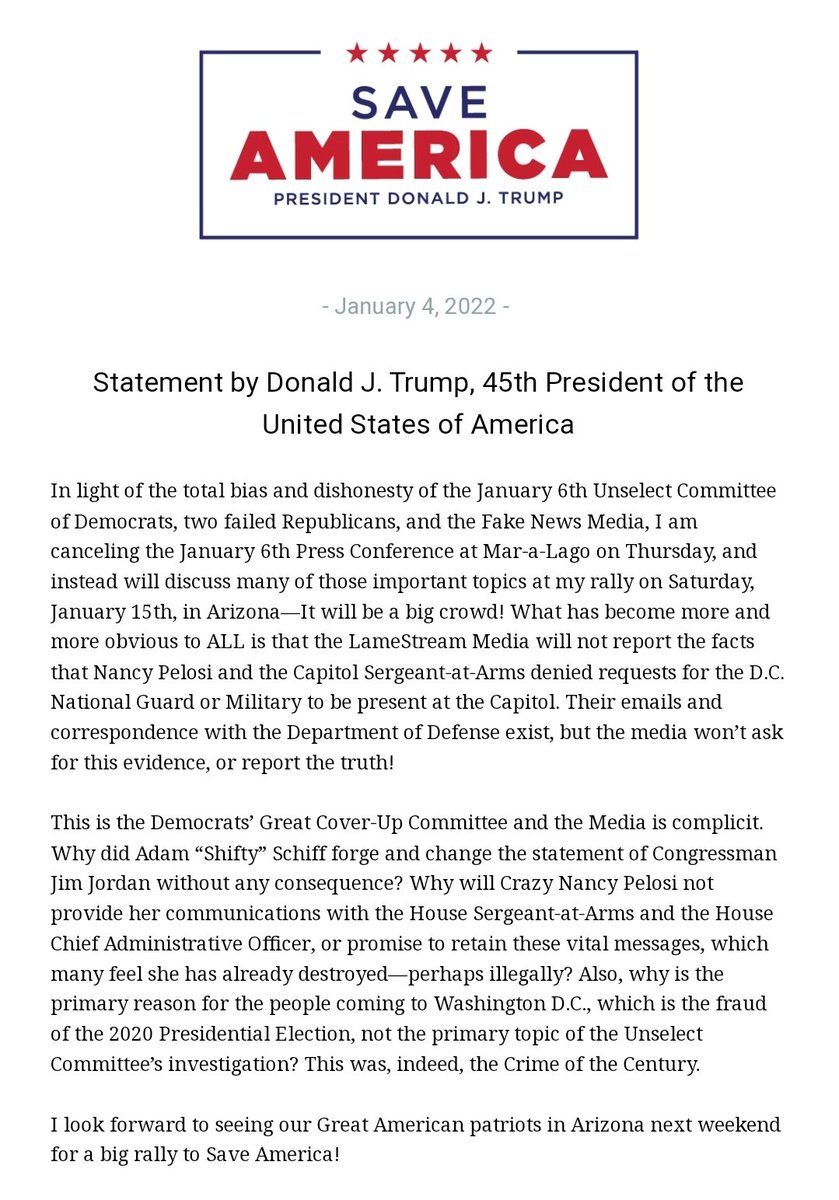 I wonder if Trump wants the DS to go all in on J6, he knows the truth, he caught them all and the J6 is falling apart.

Lets look at his statement

1. He is drawing attention to Nancy Pelosi, she is coverup vital information between herself and the DOD, he is also stating that she deleted her emails. Remember nothing is every deleted.

2. He is letting her and the [DS] know that he caught them all and the knows what they did and what they covered up. Is he suggesting that those deleted emails will be produced and if they are produced the J6 [FF] would be revealed.

3. We are in an information war, timing is everything, when do you produce the information, when you have control of the bullhorn, will his new platform allow this to happen?

Now think about what Trump said in his statement about the emails.

Via The War Room: 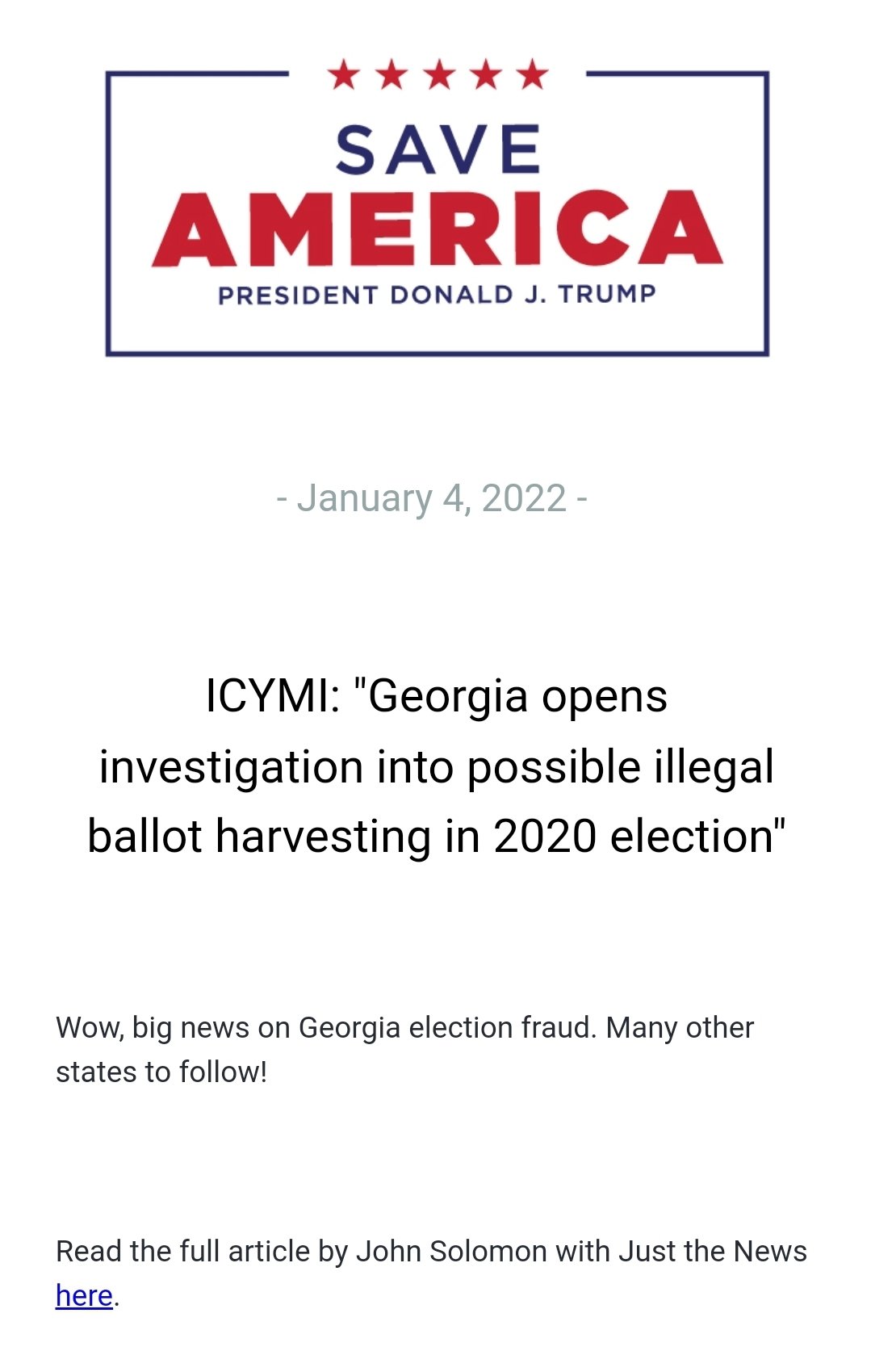 9 thoughts on “The Groundwork Has Been Laid, Pieces Are In Place, Think Mirror – Ep. 2669”