Inflation is coming and the the establishment is trying to explain why this is happening, this is why they needed an event, it was to usher in their great reset and climate agenda. They are right on schedule, patriots knew the playbook. How do you explain inflation is gold and crypto are rising, [CB] makes move to push commodities down. The [DS] is in a deep panic, the hammer is about to come down and they are making preparation to make their move. They are preparing for indictment to come out against Trump. The will do anything to stop what is coming, but nothing can stop this, nothing. The Maricopa Supervisor board is in trouble, a database was deleted.The AZ audit has uncovered fraud and that the numbers are not making sense. Ep 2477b – The Hammer Is Coming Down, At This Point They Have It All, They Caught Them All Is this about Money laundering?

FLASH BACK TO TRUMP

Tesla will pay $750,000 and build a solar roof to settle dozens of air-quality violations at its Fremont factory

Amazing coincidence on the timing of these two incidents…

Source: thegatewaypundit.com
Pelosi suggests House Ethics Committee should investigate Rep. Marjorie Taylor Greene for “verbal assault” and “abuse” of Rep. Alexandria Ocasio-Cortez in a confrontation outside House chamber: “This is beneath the dignity of a person serving in the Congress of the United States”

A Vote For Illegals

Ohio Will Give Out $1 Million Randomly To Vaccinated Residents

Without fully explaining why, the CDC director says vaccinated people still need to wear a mask when on airplanes or public transportation, despite new guidance that vaccinated people can go mask-less indoors regardless of event size.

According to @Worldometers it is official…

Despite all sorts of variant-motivated (and seemingly anti-vaccine) “expert” predictions of doom/gloom for April/May, the USA 7-day ave. for daily “new cases” is at it’s LOWEST level since full testing was available early last summer. pic.twitter.com/vJs9p1U03W 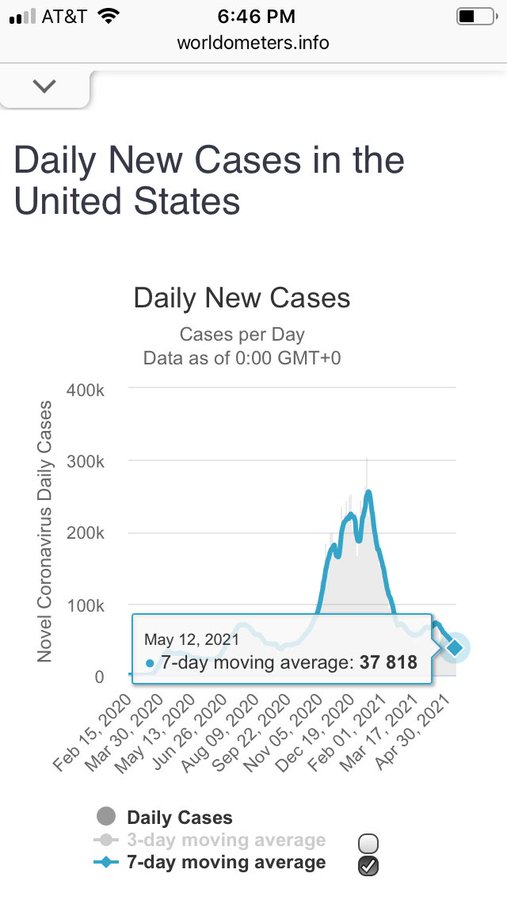 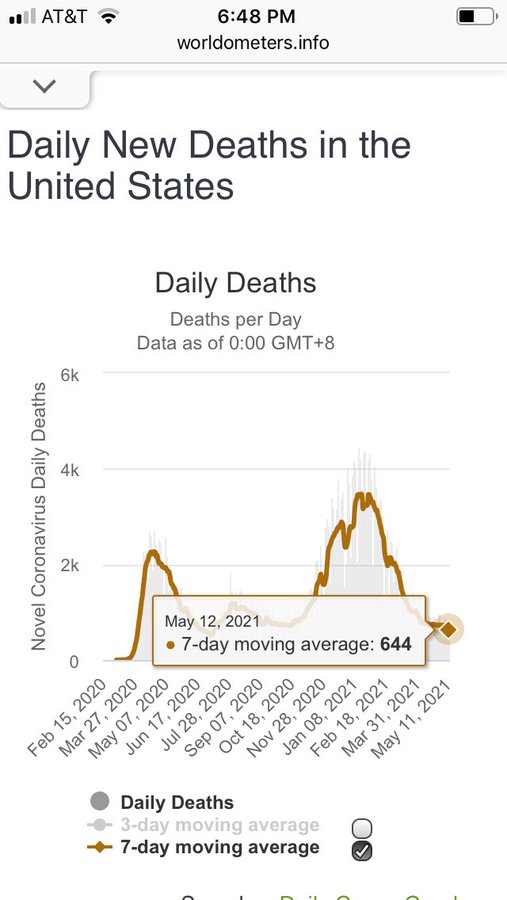 State mandated we were masks.

State banned us from beaches and parks.

State blocked us from our businesses, schools, weddings, graduations.

State banned our right to assembly.

When this is over, C-19 will have successfully discredited the corrupt medical industry, the MSM, and politicians around the world. Every piece of the puzzle is serving to birth the Great Awakening. 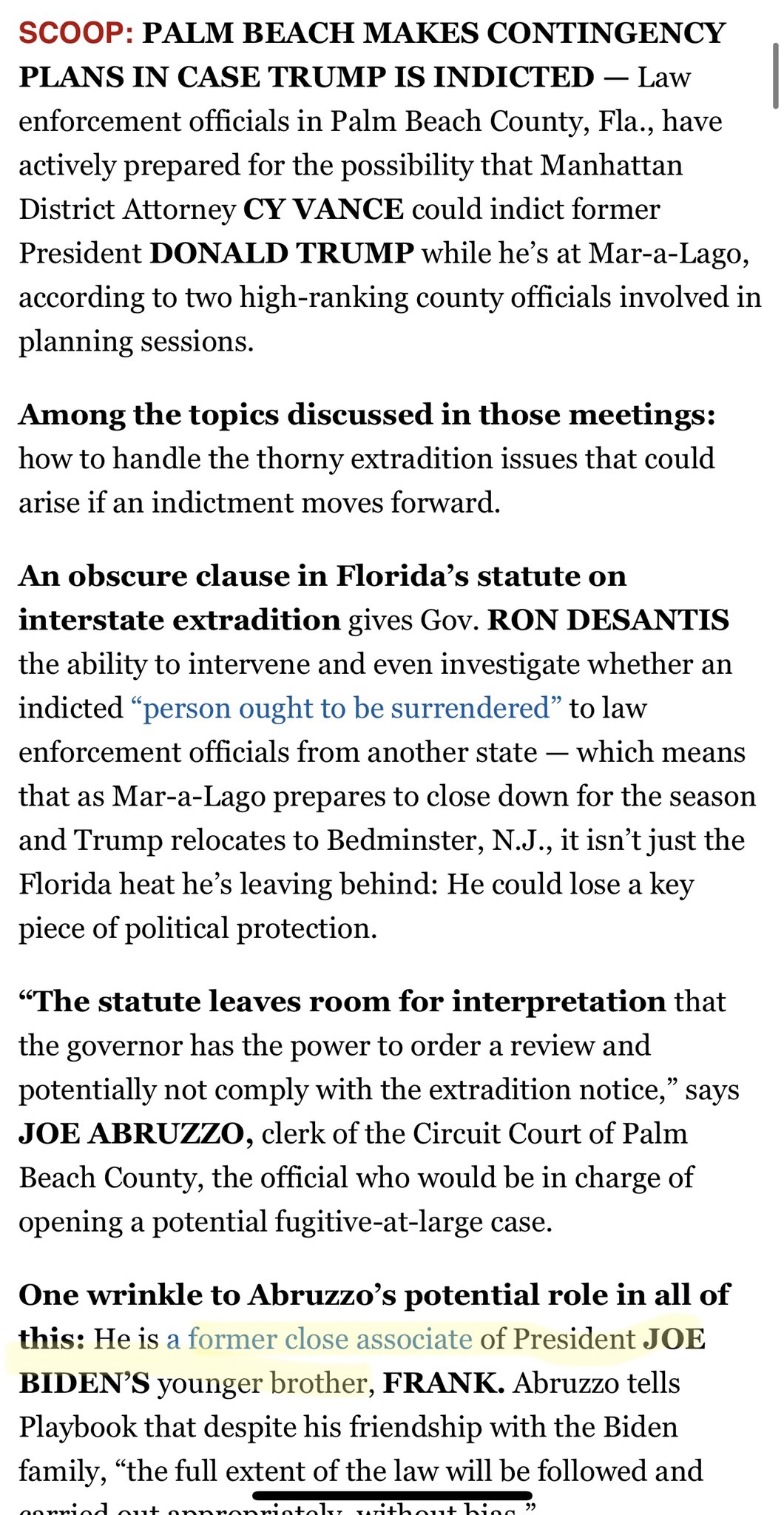 In criminal and civil law, the term “chain of custody” refers to the order in which items of evidence have been handled during the investigation of a case. Proving that an item has been properly handled through an unbroken chain of custody is required for it to be legally considered as evidence in court.

I am writing to seek your assistance and cooperation in the resolution of three (3) serious issues that have arisen in the course of the Senate’s ongoing audit of the returns of the November 3, 2020, general election in Maricopa County.

I. Ongoing Non-Compliance with the Legislative Subpoenas

The first issue concerns Maricopa County’s apparent intent to renege on its previous commitment to comply fully with the legislative subpoenas issued on January 13, 2021, which, as you know, Judge Thomason found were valid and enforceable.

To date, attorneys for Maricopa County have refused to produce virtual images of routers used in connection with the general election, relying on a conclusory and unsupported assertion that providing the routers would somehow “endanger the lives of law enforcement officers, their operations, or the protected health information and personal data of Maricopa County’s citizens.”If true, the fact that Maricopa County stores on its routers substantial quantities of citizens’ and employees’ highly sensitive personal information is an alarming indictment of the County’s lax data security practices, rather than of the legislative subpoenas.

Similarly, the County’s assertion that producing the internet routers for inspection would cost up to $6,000,000 seems at odds with Deputy County Attorney Joseph La Rue’s prior representation to Audit Liaison Ken Bennett that the routers already had been disconnected from the County’s network and were prepared for imminent delivery to the Senate.

Nevertheless, in an effort to resolve the dispute regarding production of the routers, we propose that agents of CyFIR, an experienced digital forensics firm and subcontractor of Cyber Ninjas, review virtual images of the relevant routers in Maricopa County facilities and in the presence of representatives of the Maricopa County Sheriff’s Office. Such an arrangement would permit Maricopa County to retain custody and monitor the review of router data while ensuring that the Senate may access the information it requires—and to which it is constitutionally entitled—to successfully complete its audit. The Senate has no interest in viewing or taking possession of any information that is unrelated to the administration of the 2020 general election.

Separately, Maricopa County has refused to provide the passwords necessary to access vote tabulation devices. Its attorneys’ insistence that the County does not have custody or control of this information is belied by the County’s conduct of its own audits, which, if they were as comprehensive as they purported to be, almost certainly would have entailed use of the passwords to examine the tabulation devices, and it strains credulity to posit that the County has no contractual right to obtain (i.e., control of) password information from Dominion.

As the audit has progressed, the Senate’s contractors have become aware of apparent omissions, inconsistencies, and anomalies relating to Maricopa County’s handling, organization, and storage of ballots.We hope you can assist us in understanding these issues, including specifically the following:

For your convenience, images of the corresponding pink report slips are attached in Exhibit A.

We have recently discovered that the entire “Database” directory from the D drive of the machine “EMSPrimary” has been deleted. This removes election related details that appear to have been covered by the subpoena. In addition, the main database for the Election Management System (EMS) Software, “Results Tally and Reporting,” is not located anywhere on the EMSPrimary machine, even though all of the EMS Clients reference that machine as the location of the database. This suggests that the main database for all election-related data for the November 2020 General Election has been removed. Can you please advise as to why these folders were deleted, and whether there are any backups that may contain the deleted folders?

The image below shows the location of the files known to be deleted. In addition, the main database for “Results Tally and Reporting” is not present.

I am hopeful that we can constructively resolve these issues and questions without recourse to additional subpoenas or other compulsory processes.To that end, I invite you and any other officers or employees of Maricopa County (to include officials in the Elections Department) who possess knowledge or information concerning the matters set forth above to a meeting at the Arizona State Capitol on Tuesday, May 18, 2021, at 1:00 p.m. in Hearing Room 109. Chairman Petersen, former Secretary Bennett, and I will attend the meeting, which will be live-streamed to the public.

Please let me know at your earliest convenience whether you accept my invitation and, if so, which Maricopa County personnel will attend.

Thank you for your cooperation on these important issues of public concern.

Breaking Update: As we open boxes of ballots delivered by Maricopa County, we are discovering significant discrepancies between the number of ballots therein and the batch reports included in the boxes.

when an actual count of the ballots was done, the # of ballots counted is going to be very different from the number of ballots reported in the election totals.  Which handed Biden the win in AZ.