Ep 2922b – The Jackals Reveal Themselves, Panic, Think Chess, What Was The Target? Ep 2922a – [CB] Makes Their Move On Alternative Currency, Watch What Happens Next

The agenda of the [WEF] is hurting countries which means it is hurting the people, the gas crisis in Germany wipes 100 billion off German economy. The climate agenda is finished, all the predictions were a lie and now they are proven to be lies. The [CB] is now making a move on cryptocurrency. The [DS] is panicking because Trump, using the people who created the red wave is about to take control of the house and the senate. This is their worst nightmare, they will do anything to stop it. The jackals are now revealing themselves and Trump can see the board very clearly. Moves and Countermoves. Sometimes you have to sacrifice your pawns to get the winning move.

Climate scientist in 1971: “In the next 50 years fossil fuel burning could screen out so much sunlight that the average temperature could drop by 6 degrees. It could be sufficient to trigger an ice age.” 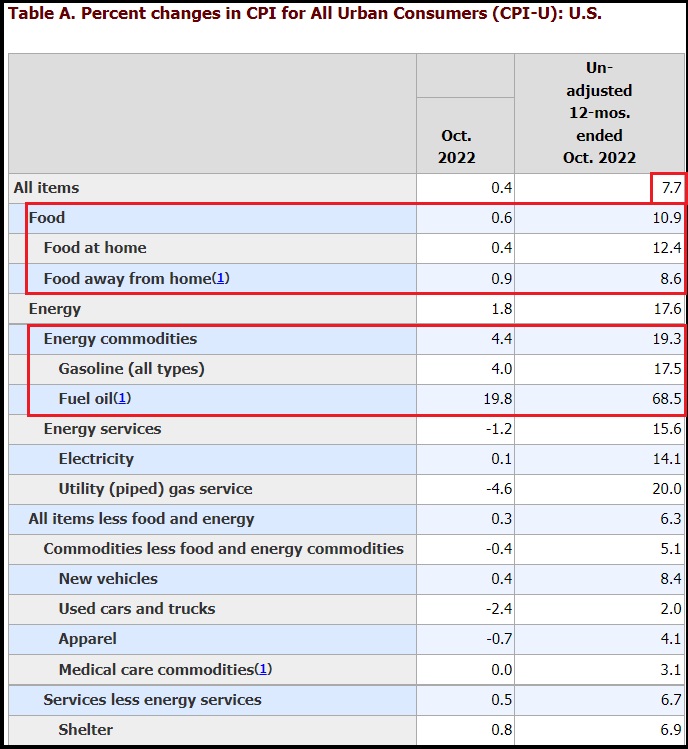 YoY inflation seems to be moderating at 7.7%, it’s a false premise. {Go Deep}

As expected, the energy-driven consumer inflation in the food sector has arrived.  The proverbial field inflation is arriving at the fork, and the October CPI now shows the third wave of food price increases we had previously discussed.

Food, fuel, electricity, home heating and housing costs continue growing monthly, but give the illusion of moderating when compared to last year.

Against all odds and against everyone, we had a bigger win in the 1st round of 2022 than we had in 2018 – almost 2 million more votes! We also elected the largest House and Senate caucuses, which was our top priority at this time.

We won governors’ races in 8 states in the first election, & will win  8 more states in the runoffs. This is the biggest victory for patriots in the history of Brazil: 60% of Brazil will be governed by people who defend our values and fight for a free country.

A lot of people got discouraged by the lies spread by pollsters, who completely failed in this election. They got all their predictions wrong and are the biggest losers of this election. We beat their lies and now we’re going to win the runoff election Oct. 30!

“The Armed Forces report did not exclude the possibility of fraud or inconsistency in electronic voting machines. Read in full:”

(Google Translated from the press release):

In order to avoid distortions in the content of the report sent yesterday (9.11) to the Superior Electoral Court (TSE), the Ministry of Defense clarifies that the accurate work of the team of military technicians in the inspection of the electronic voting system, although not mentioned, it also did not exclude the possibility of fraud or inconsistency in the electronic voting machines and in the 2022 electoral process. Furthermore, the report indicated important aspects that require clarification. Between them:

– there was a possible security risk in the generation of programs from the electronic voting machines due to the occurrence of computers accessing the TSE network during the compilation of the source code;

– the functionality tests of the polls (Integrity Test and Pilot Project with Biometrics), in the way they were carried out, were not sufficient to rule out the possibility of the influence of a possible malicious code capable of altering the functioning of the voting system; and

– there were restrictions on the technicians’ adequate access to the source code and software libraries developed by third parties, making it impossible to fully understand the execution of the code, which covers more than 17 million lines of programming.

As a result of these findings and other obstacles listed in the report, it is not possible to guarantee that the programs that were executed in the electronic voting machines are free from malicious insertions that alter their functioning.

Therefore, the Ministry of Defense urgently requested the TSE to carry out a technical investigation into what happened in the compilation of the source code and a thorough analysis of the codes that were actually executed in the electronic voting machines, creating, for these purposes, a specific commission of renowned technicians from society and technicians representing the inspection entities.

Biden signaling his DOJ will try to take out Trump https://t.co/qKlMvwjbq2

LMAO – If you wanted crime under control, you would've voted her out. You voted for it, so stop crying and enjoy your high crime and filth. You begged for it and when it gets much worse, I literally don't care. You deserve what you're getting. pic.twitter.com/CfQJOp17Zw

Gingrich suspects Trump rethinking 2024: He’s ‘got to look at the results and be troubled’

There’s been one constant in GOP leadership since 2016, and it ain’t Trump.

It’s McConnell. He’s been in charge, calling the shots the whole time. And it’s McConnell, not Trump, who is far and away the most hated figure in national politics. https://t.co/1VutiVDgqu pic.twitter.com/MbwSOB5qEY

When does NDA expire re: DrudgeR sale to foreign entity?
Think 2020_P election +1.
[removal [blackout] coming of pro_POTUS accounts]
Win by any means necessary.
All assets will be deployed this election.
Sleepers [Pro] will shift position [Nay].
[Paul Ryan_Fox]
Q

Emerald Robinson at Frank News discussed these activities related to what we labeled the Drop and Roll in a report on Wednesday. Robinson also shared the results in the AG race in Michigan where a huge data drop landed in the corrupt AG’s pile of votes late in the evening.

THIS NEEDS TO BE INVESTIGATED.  This is not normal.

We flipped 4 NY Congressional seats, broke the supermajority in the State Senate, and received the most votes of any GOP candidate since Nelson Rockefeller. Team Zeldin put in max effort every day and has no regrets. It was such an honor to lead this year’s ticket. https://t.co/bpOTFBrh9F

Republicans destroyed the Democrats in the popular vote. The GOP margin of victory was more than 6%. pic.twitter.com/2yb3YN3ocA

Just got off the phone with Kash Patel. We’ve got BIG things planned come January. pic.twitter.com/F61k1lJ2Dt