The people are now seeing the [CB] agenda, they do not want to help the people, they want to keep the people down. This is backfiring. Yellen pushes forward with the plan and the Fed finally says the quiet part out loud. They are now telling people that every other currency is worthless, only look at the CBDC and everything will be ok. The [DS] is panicking like we never saw before. This entire plan to expose the [DS] system is being driven by we the people, and they know this will be difficult to stop. First they will try to create a violent riot across the country, it will be small but the fake news and big tech will try to make it seem a lot larger than it is, when this fails, they will move into the next [FF] this will be a communication blackout or they might reverse the order. The patriots caught them all, this is the largest sting operation the world has ever witnessed, no deals, no place to hide, once the people see it all, justice. Ep 2527b – The Patriots Caught Them All, Sting Of The Century, No Deals, No Place To Hide my friend sent me this picture of a sign in a subway in north carolina pic.twitter.com/CemZdcs1HY

This is a real tax on the middle class. This will hurt many families badly. pic.twitter.com/bGGQrjQdEc 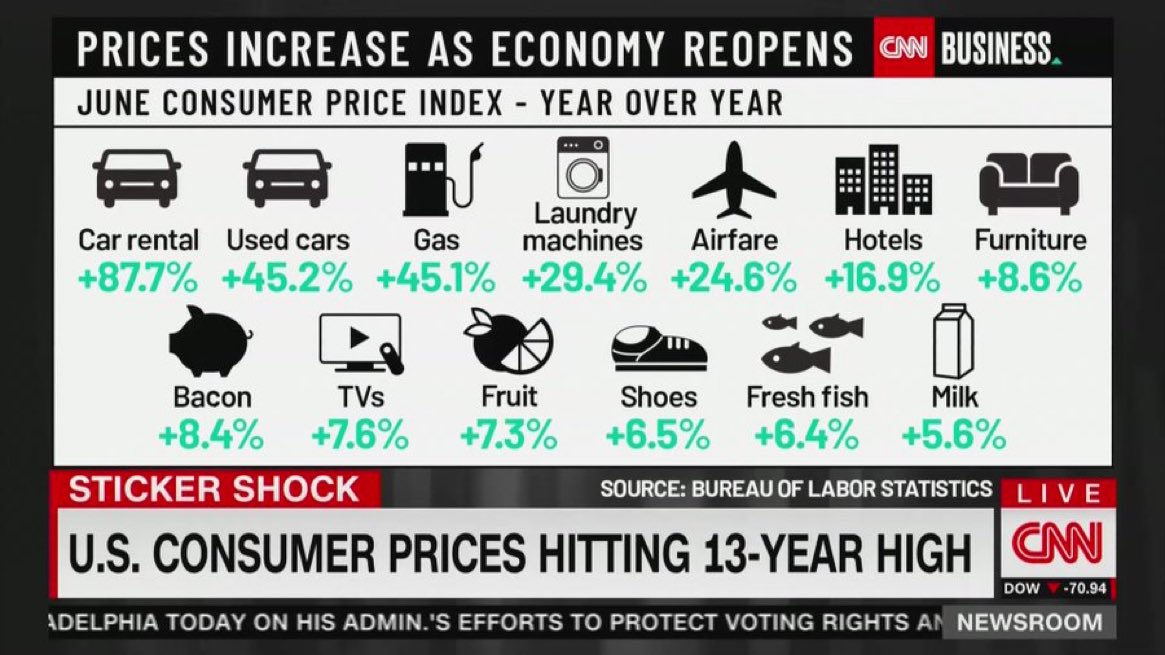 Click here to watch the video they don’t want you to see: https://t.co/F8uQlGioXL pic.twitter.com/InFORACEir

(1 of 2) Everything in my 6/9/21 letter to President Trump is 100% true. I have a lifetime reputation for honesty that is beyond reproach. If Bill Barr wants to run to WaPo to complain about me telling the truth, that’s OK – it doesn’t bother me.

(2 of 2) I have more important things to be concerned about than Bill Barr’s feelings. I’m concerned about the future of PA and of our country. We need change in our politics – badly. And it will come in 2022.

JUST IN – United States should accommodate “millions of refugees” who will be forced to flee “effects of a changing climate,” according to a study by the George Soros-funded Refugees International advocacy group.

Interesting…Translation: If we let you in you must vote “D”, if you want freedom there is no place for you in America, The Cuban people would be able to identify communism and this is what the [DS] is panicking about

Pay Attention – French President Emmanuel Macron Announces All Citizens Who Wish to Shop, Drink, Eat At Restaurants, Travel or Worship Must Be Vaccinated

I guess Psaki was wrong, Freedom and Liberty are not a call for more vaccines, its the Opposite

It seems Macrons rule is coming to an end. Why interfere with an enemy while they are in the process of destroying themselves.

Tennessee’s former top vaccinations official, Dr. Michelle Fiscus, says the state’s elected leaders put politics over the health of children by firing her for her efforts to get more Tennesseans vaccinated. Only 38% of Tennesseans are fully vaccinated. https://t.co/STyWcLQcks

She got fired for telling doctors they could start jabbing children without parental consent. https://t.co/SeRiVK8rNj 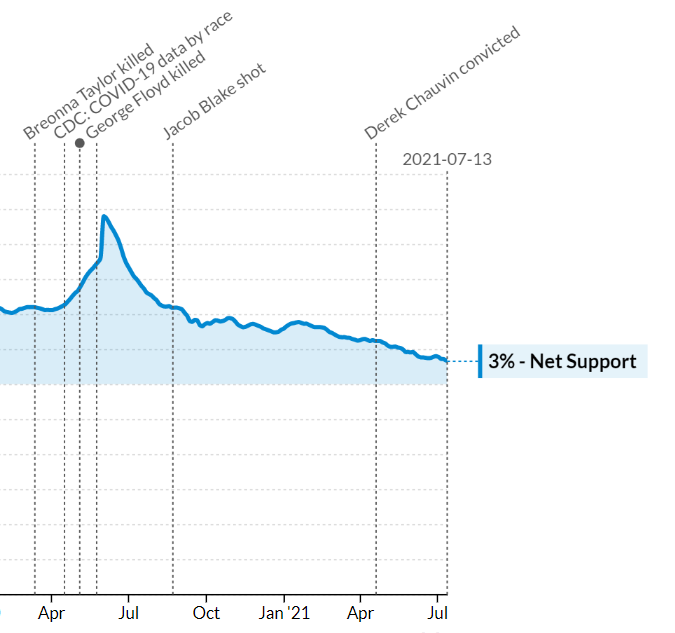 A Scottsdale woman has been indicted and accused of casting a vote in her deceased mother’s name through an early ballot in the 2020 General Election. More:

SCOTTSDALE – Attorney General Mark Brnovich announced today that a State Grand Jury has indicted Tracey Kay McKee, of Scottsdale, with one count of Illegal Voting and one count of Perjury, for allegedly casting a vote in the name of a deceased person through an early ballot in the 2020 General Election. 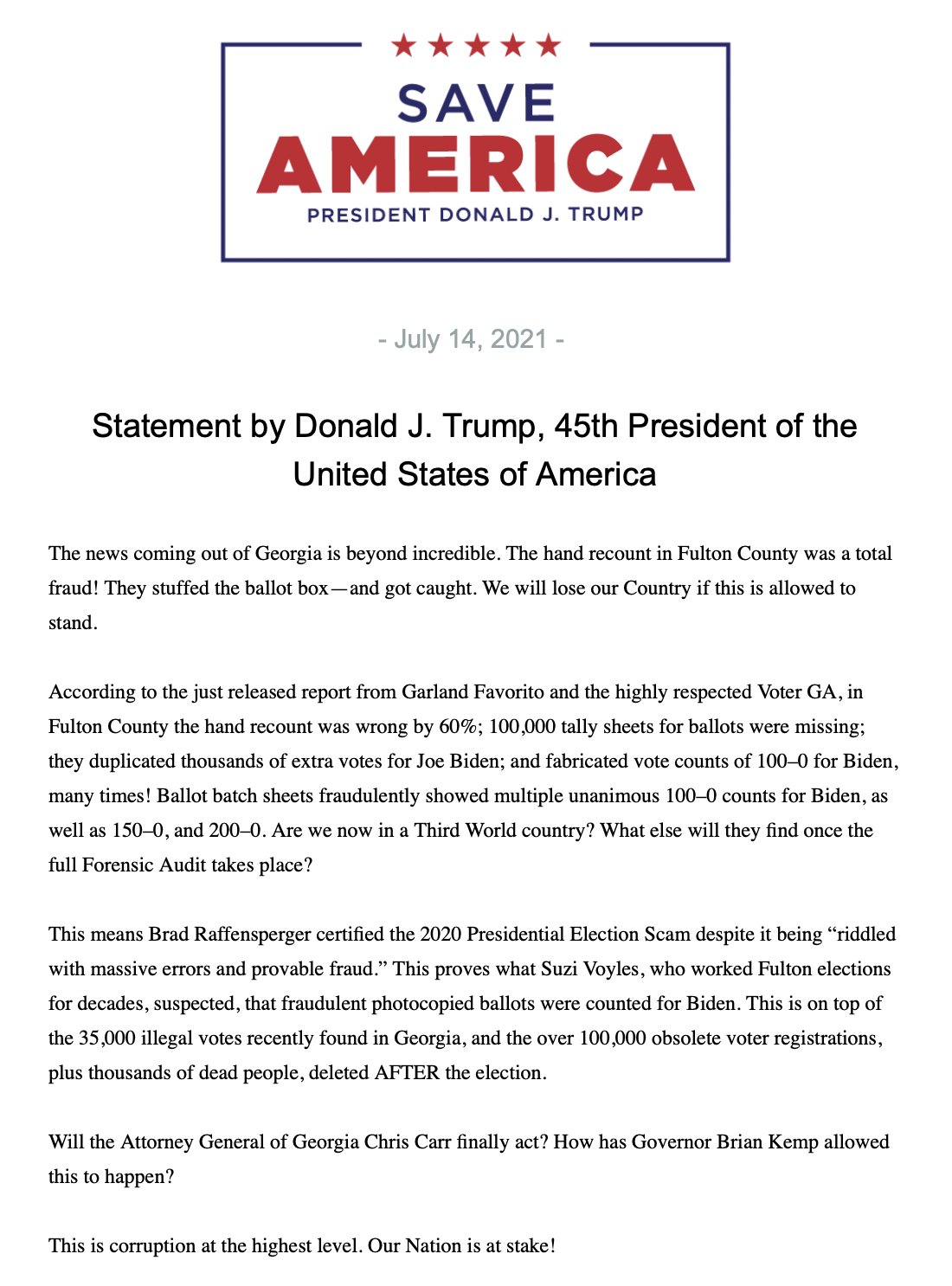 The “facts” of the left don’t stand up to free speech and logic.
They can only progress their narrative through censorship.

Was this the sting of the century, Trump retweeted this , we will get to that in a minute, but lets look at a couple of posts.

Was TRUMP asked to run for President?
Why?
By Who?
Was HRC next in line?
Was the election suppose to be rigged?
Did good people prevent the rigging?
Why did POTUS form a panel to investigate?
Has POTUS *ever* made a statement that did not become proven as true/fact?
What is POTUS in control of?
What is the one organization left that isn’t corrupt?
Why does the military play such a vital role?
Why is POTUS surrounded by highly respected generals?
Was Trump asked to run for President w/ assurances made to prevent tampering?
How is POTUS always 5-steps ahead?
Who is helping POTUS?

President Biden: “Attorney General Merrick Garland announced that the United States Department of Justice is going to be using its authorities to challenge the onslaught of state laws undermining voting rights in old and new ways.”

13 battleground states. These are the states on which an electoral victory hinged:

How do you ‘safeguard’ US elections post-POTUS?
How do you ‘remove’ foreign interference and corruption and install US-owned voter ID law(s) and other safeguards?
It had to be this way.
Sometimes you must walk through the darkness before you see the light.
Q

We’ve been told by Mike Lindell and his team of cyber-experts that internet data packets were captured during and after the 2020 election showing election tampering.   were their multiple groups capturing the data

To monitor the elections do DHS, Spaceforce, NSA etch watch and capture data

They [DS] players know that the info was captured, this is why they are panicking, they know the people are going to show fraud at the local level, once the people see this they know that evidence that Mike Lindell has will be produced, will this correspond to what the spaceforce, dhs, or military intelligence captured. Most likely yes,

Biden just said 150 people voted in the 2020 Presidential Election (Scam!). On the assumption that he meant 150 million people, and based on the fact that I got 75 million+++, that would mean that Biden got 75 million votes, which is 6 million votes less than what they said they got. So what is that all about? Are they already conceding 6 million votes?

Nothing is random.
Everything has meaning.
+++

If nothing is random, then is the plan

Remember, nothing you’re seeing out there is supposed to be happening. The [DS] was suppose to be in full control, They beat Trump he was removed from the WH, the people were not suppose to demand a forensic audit.

The only course of action is to go after the people, each and everyone of them,

The [DS]/Biden Admin are portraying its political opponents ( we the people ) as violent extremists who pose a threat to national security.

Whats their agenda, they want the people to take violent action, this will not happen so they will have to resort to what they do best, they will create it just like the kidnapping of Whitmere, Jan 6th etc.  The big tech companies, fake news , corrupt politicians will be the megaphone of this FF. They put out the false narrative that if Trump is not reinstated by Aug, the plan failed.

If you see posts or fliers that say attend audit rallies, or join us for decision day in Aug it is a trap, they will try anything and eveyrthing to keep people together to push their agenda.

Carpe Donktum@CarpeDonktum
Dear Joe,
While I am flattered that you put me near the top of your Digital Terrorists list, I feel like I should make you aware of the reality of the situation.I am a stay-at-home dad in Kansas with no college education, and no previous experience in marketing, video editing, or advertising.Your party and ideas were so incredibly feeble and frail that I was able to put a sizeable dent in the narrative you spent billions of dollars constructing…In my spare time. Are you sure you want me to shift my entire focus and energy in your direction?Let me know
So why would they do this, because this is partly what they are panicking about.
Each time Trump does rally he will be sharing the election fraud, as more information comes out the people will hear about, pain

A person, including an election official, who in any election for Federal office—

(1)knowingly and willfully intimidates, threatens, or coerces, or attempts to intimidate, threaten, or coerce, any person for—

registering to vote, or voting, or attempting to register or vote;

exercising any right under this chapter; or

(2)knowingly and willfully deprives, defrauds, or attempts to deprive or defraud the residents of a State of a fair and impartially conducted election process, by—

the procurement or submission of voter registration applications that are known by the person to be materially false, fictitious, or fraudulent under the laws of the State in which the election is held; or

the procurement, casting, or tabulation of ballots that are known by the person to be materially false, fictitious, or fraudulent under the laws of the State in which the election is held,
shall be fined in accordance with title 18 (which fines shall be paid into the general fund of the Treasury, miscellaneous receipts (pursuant to section 3302 of title 31), notwithstanding any other law), or imprisoned not more than 5 years, or both.
(Pub. L. 103–31, § 12, May 20, 1993, 107 Stat. 88.)