The [DS]/[CB] are doing exactly what the patriots want, how do you introduce a new economic system, you must create a crisis that shows the people that we need to make a change. [JB] is now moving forward with the infrastructure which, stimulus that will destroy the country. The [DS] is now doing exactly what the patriots want, they are showing the people it all, they are not holding back. The people as they continue to see this they will hit the precipice of destruction, when you see the people begin to stand up and reject the the control, this is when the precipice is hit. Trump tested the waters today, he made a surprise visit during a wedding and talked about [JB] and this disastrous policies then asked if he was missed yet. Ep 2439b – The System Of Control Is Being Exposed,Precipice Of Destruction,Trump “Do You Miss Me Yet” Ep 2439a – [JB] Is Moving The Economy Right Where The Patriots Want, Crisis, Action

“The list of new policies goes on. There is money in the American Rescue Plan to expand food stamps, bolster state welfare programs, and increase federal support for child and dependent care. Put all this together and the bill is expected to reduce overall poverty by more than a third and child poverty by more than half. It is, with no exaggeration, the single most important piece of anti-poverty legislation since Lyndon B. Johnson’s Great Society, itself the signature program of a man who sought to emulate F.D.R.”

The plan will center on proposals to repair the nation’s physical infrastructure, such as its bridges, railways, ports, water systems and more, as well as revive domestic manufacturing; invest in research and development; expand clean energy investments, and create a nationwide infrastructure for electric vehicles. This part of the plan also will include major investments in child care and educational facilities, and major investments in caretakers for the elderly and disabled amid the nation’s major aging crisis.

The second part of the plan, which will be unveiled next month, is expected to include initiatives to expand child care; provide paid family and medical leave; approve an expansion of health care and the Affordable Care Act, and extend a larger child benefit recently approved by Congress, among other measures. White House officials have said no decisions have been made about which of the proposals they would aim to move through Congress first.

…The Biden administration has indicated that it plans to use its infrastructure proposal, a package to be unveiled on Wednesday that reportedly could cost as much as $4 trillion, to supercharge the nation’s clean energy transition. The move could set the stage for a drop in emissions and represents a broader change in how Democrats tackle the issue of climate. The same Democrats faking outrage over the lie that the Georgia election law “bans water bottles” are oddly quiet about the disgusting living conditions of 15,000 kids in cages at the border, sleeping on the floor, showering once every seven days.

THE WORLD MUST BE SHOWN how corrupt our societal control systems have become.

The U.S. Supreme Court on Wednesday will hear oral argument in Caniglia v. Strom, a case that could have sweeping consequences for policing, due process, and mental health, with the Biden Administration and attorneys general from nine states urging the High Court to uphold warrantless gun confiscation. But what would ultimately become a major Fourth Amendment case began with an elderly couple’s spat over a coffee mug.

In August 2015, 68-year-old Edward Caniglia joked to Kim, his wife of 22 years, that he didn’t use a certain coffee mug after his brother-in-law had used it because he “might catch a case of dishonesty.” That quip quickly spiraled into an hour-long argument. Growing exhausted from the bickering, Edward stormed into his bedroom, grabbed an unloaded handgun, and put it on the kitchen table in front of his wife. With a flair for the dramatic, he then asked: “Why don’t you just shoot me and get me out of my misery?”

Rutgers University will be vulnerable to litigation for years and
years from students or staff who claim adverse health consequences
from a vaccine they felt compelled by the institution to accept.

If Voter ID is racist then Vaccine Passports are also racist.

Make up your mind, Democrats.

DeSantis threatens to sue the CDC. Here’s why–

Ex-Clinton Adviser: Mandatory Vaccine Passport Could Lead to ‘End of Human Liberty in the West’

Vaccine passports are a good idea. Among other things, it will single out the still large contingent of people who refuse vaccines, who will be foreclosed from doing a lot of things their peers can do. That should help break the resistance down.

Every elected GOP officeholder worth a damn should publicly oppose this un-American concept immediately!!! https://t.co/hPuvhUMTW5 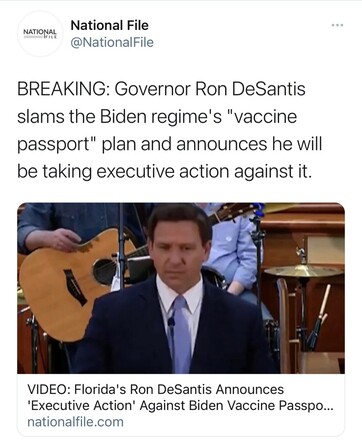 Goldman Sachs and Morgan Stanley have reportedly sold $19 billion worth of shares in Chinese tech and US media companies. Traders are now wondering what caused the unusually massive move and whether it will continue next week.

The first batch, that included $6.6 billion worth of shares of Baidu, Tencent Music Entertainment Group and Vipshop Holdings, was sold before the market opened on Friday. Later that day, the bank reportedly managed the sale of $3.9 billion worth of shares in American media conglomerates ViacomCBS and Discovery, as well some other companies, such as Farfetch, iQiyi and GSX Techedu.

Experts are suspicious because of their size and the companies involved.

The Lincoln project tweeted this out

The billions Rupert Murdoch has made are only a fraction of what he has cost American democracy. But he did get one thing right: America IS watching. And we’ve seen enough.

The secret pedophile ring is trying to tell us who they are mad at…..

And who is still giving this group money? https://t.co/srRgVzA7gf

Another fighter jet, twists and turns

Image Name: Ehu7LRLVkAAkhCQ.png
Filename: fcf0845d9f46bf98b908dc577a98207a7af9d5e2ac95da11161ce4e43e097672.png
MSDNC controls what you see [digital echo].
Twitter – FB – GOOG control what you see and what trends [digital echo].
Hollywood [‘stars’] swarm to enforce [‘trend’ echo].
Blue checkmarks swarm to enforce [digital echo].
ANTIFA swarm to enforce [non_digital echo].
Rage and emotion follow by those indoctrinated [echo controlled].
Define ‘indoctrinate’.
to often repeat an idea or belief to someone in order to persuade them to accept it
Next: grab ‘rage & emotion’ [organized platform(s)] by indoctrinated and project as ‘majority’ [zoom and enhance _narrow focus as mainstream].
System of control.
Many choose the path of least resistance.
For many you cannot tell them the truth.
You must show them.
Only at the precipice will people find the will [strength] to change and break the system of control [be free].
Q
Trump surprises everyone at a wedding in Mar A Lago
TAKE. A LISTEN

18 thoughts on “The System Of Control Is Being Exposed,Precipice Of Destruction,Trump “Do You Miss Me Yet”- Ep. 2439”