The globalist are trying everything possible to push their plan, [AG] is now pushing Biden to shutdown another pipeline.  The dollar is continually losing value, soon people will really see how the [CB] system does not benefit them. Texas is now preparing to let people to hold Bitcoin. The [DS] is in trouble, the patriots have been investigating the leakers since 2017 and now the information was released to the public, the NYT spun the story using the keyword seize but this was by the book investigation following the rule of law. Coincidence that the information was released now, no, the storm is forming. The patriots are hitting the [DS] from all sides, this is the worlds largest sting operation, they are trapped and their is now way out. Panic is setting in over the audits, AG Garland will make sure the post election audits did not violate any laws. Zero day is coming. Ep 2501b – Trap Set, These People Are Stupid, Do You See The Storm Forming, Panic In DC The union representing the great workers building the Keystone XL Pipeline endorsed Biden. Now their workers have no jobs and the pipeline, which was well under construction (like the Southern Border Wall), has been shut down, with thousands of jobs lost and the company announcing yesterday that they are “permanently pulling out.” You should vote those people out of office immediately, and stop paying your union dues. A total waste of money. And I said it was going to happen before the 2020 Presidential Election Hoax!

I have been here for the past almost 24 hours. Where’s Vice President Harris? she is supposed to be here in control of this, it’s been 73 days, and she has yet to hit the border.

Here’s what bothers me most. We’re seeing children’s clothing. We’re seeing women’s garments, these border patrols and local law enforcement agencies are telling us how women are being raped here.

Children are coming through in this type of weather, and when they can’t fit the bill, they get left behind, but it has become more of a human trafficking for the cartels.

Just as Joe Biden was uttering words of support for Israel, he was also releasing funds to the Palestinians. This type of double talk ensures our enemies don’t fear us and our allies don’t trust us.https://t.co/5iMtdX0w5a

The person most responsible for unleashing the Fauci fraud on America is @OliviaTroye who was VP Pence’s “COVID advisor.”

In a recent article, Troye explains how her job was to misinform the Trump Admin at every turn. https://t.co/MygOB6bdkA

It’s interesting that Olivia Troye now describes herself as “a former career intelligence professional.” Which agency did she formerly work for before joining Pence’s staff? Why was she so hostile to the Wuhan lab leak theory? And so hostile to Pompeo’s lab leak investigation?

Troye writes that the lab leak theory was so dangerous a threat to the IC that “ultimately CIA Director Gina Haspel intervened to defend the integrity of the intelligence community & insulate it from political pressure.” How would she know that?

In Sept. 2020 @OliviaTroye was fired by Trump Admin after someone finally figured out she was another NeverTrumper on Pence’s team. Almost the next day, Troye started an anti-GOP org. Then she publicly voted for Biden. While claiming to be a Republican.

They say I was “contradicting expert consensus”

So, @POTUS @SenRonJohnson, to be clear, in America one can no longer express a dissenting professional opinion or a personal experience. Right? https://t.co/8rwGniiO7z

FBI Director: At Least One Individual Brought Gun Inside Capitol on Jan. 6

JUST IN – Attorney General Merrick Garland announces that the US Justice Department will scrutinize any post-election audits for evidence of voting law violations. .@RepAdamSchiff on Trump DOJ seizing House Democrats’ data from Apple: “I view Bill Barr as the second most dangerous person in the country after Donald Trump.” https://t.co/kmdZNxIPUS pic.twitter.com/1GCezvA860

As CNN knows very, very well, Swalwell is rumored to be an even bigger leaker than Schiff. CNN worked as co-conspirators in distributing Democrats’ many damaging lies about Trump-Russia collusion. https://t.co/vxxwkRwoSI

Many people are noting that Schiff recently subpoenaed phone records — and gratuitously published them — including records of Devin Nunes and HPSCI GOP staff.

Two things to note here in this legacy media coverage of this revelation that both Swalwell and Schiff’s phone records were being surveilled and records seized:  1) It’s Swalwell claiming the matter is now closed. The DOJ hasn’t said shit.  2) When the DOJ gets a spy warrant it’s retroactive and allows them to go backwards through your phone records. They don’t just spy on your currently ongoing phone activity, they get to examine your past phone records.

Then we have this from the DOJ OIG

DOJ OIG Initiates a Review of the Department of Justice’s Use of Subpoenas and Other Legal Authorities to Obtain Communication Records of Members of Congress and Affiliated Persons, and the News Media

Trap set, these people are stupid.  So they want to bring BB and JS in to question them under oath, The [DS]/Ds just took the bait, how do you inform the public, how to show the people the difference between illegals warrants and warrants that were legally obtained. What information will be produced?  The patriots are preparing the ground work. 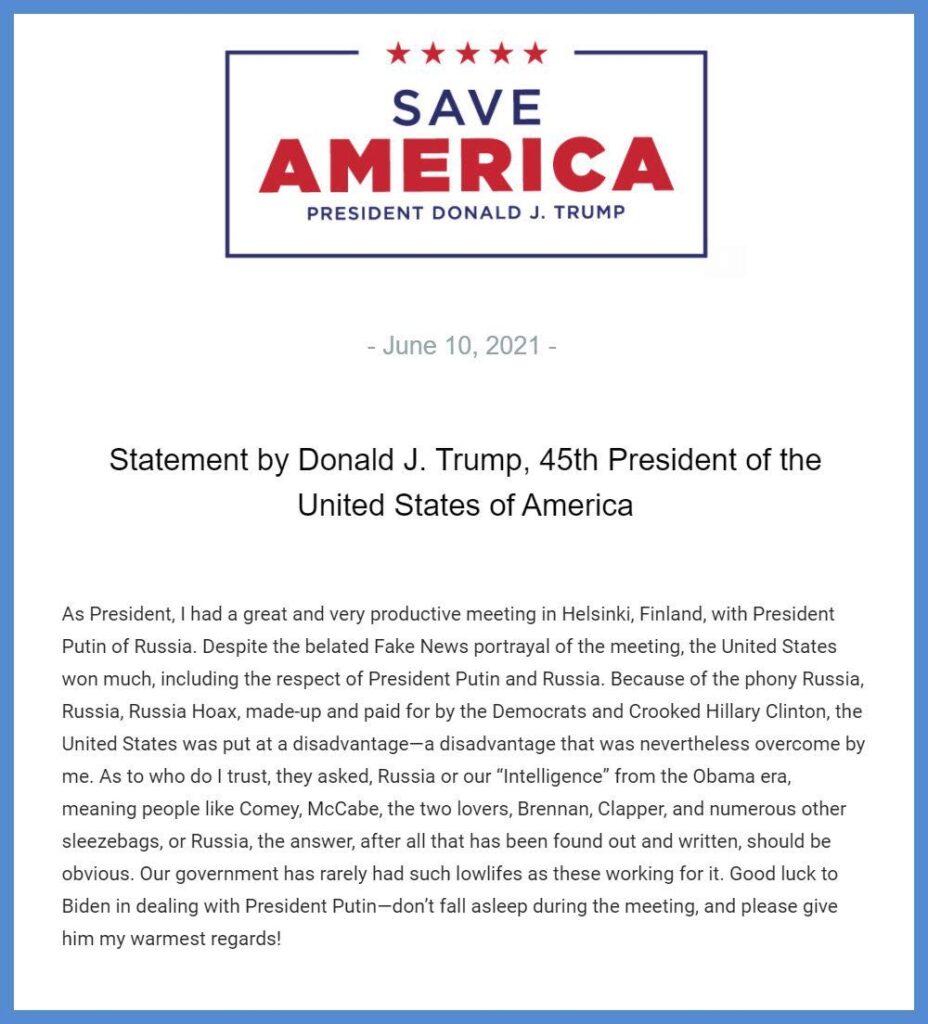 A Fire And Cyberattack Cause Major Blackouts Across Puerto Rico

I turned down two book deals, from the most unlikely of publishers, in that I do not want to do such a deal right now. I’m writing like crazy anyway, however, and when the time comes, you’ll see the book of all books. Actually, I’ve been working on a much more important project right now!