Ep 2902b – Trump Caught Them All,Durham Exposed It All,The Path Is Now Set,It Must Be Done Right The green new deal is falling apart, the electric cars were a disaster and now there is a grave yard of these cars. The people are waking up and asking question about how currency is created. Kevin Sorbo wants to know if they print the money out of thin air why does he need to pay taxes. The [DS] believes they have the upper hand they don’t. The verdict came in with Danchenko he was acquitted. Remember who was on trial, was it Danchenko or was it the FBI? The plan is working the path is set and the players have been identified. It must be done right according to the rule of law. The [DS] is preparing to blackout when the truth is revealed, the patriots already have countermeasures in place.

Under the hood, the report’s measure of future sales slid 11 points to 35, the lowest since 2012, while indexes of current sales and prospective buyer traffic weakened to the softest levels since May 2020.

This could be a very serious problem…

If the government can just print money, why am I paying taxes?

The Jury Has Not Reached a Verdict

Get your popcorn ready

Dude got Robby Mook to testify on the stand (under oath mind you) that Hillary was behind the #SteeleDossier.

I suspect that was really the point of it all along.

The fake news media is trying hard to sell the false narrative that #Durham is nearly done with his investigations/prosecutions and is close to wrapping things up.

What most folks don’t yet understand, and they’re going to find out, is that he’s just gonna keep coming…and there isn’t a damn thing [they] can do to stop him.

https://www.foreignassistance.gov/explore
Why, for decades, has the UN encouraged donor countries to contribute 0.7% of their gross domestic product (GDP) on foreign aid?
The corruption (infiltration) at the top (WW) has spread like cancer.
https://www.youtube.com/watch?v=G2qIXXafxCQ
Listen again, carefully.
The Great Awakening.
Q

Yesterday the government asked for more time to respond to U.S. District Judge Amos Mazzant’s September 29, 2022 order directing the FBI to produce all records related to Seth Rich’s laptop. Somewhat relatedly, the FBI is withholding three reports produced by CrowdStrike in August of 2016 regarding the purported hack of the Democratic National Committee.

First the laptop. The FBI wants two more weeks so it can prepare a motion for reconsideration. As a courtesy, we have not objected to the request. According to the government’s motion, “the FBI is uncertain how to comply with the Court’s order as written, and the FBI is seeking input from a pending appellate consultation regarding the order to properly address this issue.”

The order itself is pretty straightforward, at least with respect to Seth’s personal laptop, because it directs the FBI to “produce the information it possesses related to Seth Rich’s laptop and responsive to Plaintiff’s FOIA requests within 14 days of this Order.” On the other hand, the order does not discuss Seth’s work laptop, which is also in the possession of the FBI.

Twitter Just Surrendered to Elon Musk: It Quietly Makes a Move That Reveals the Buyout Deal is About to Close 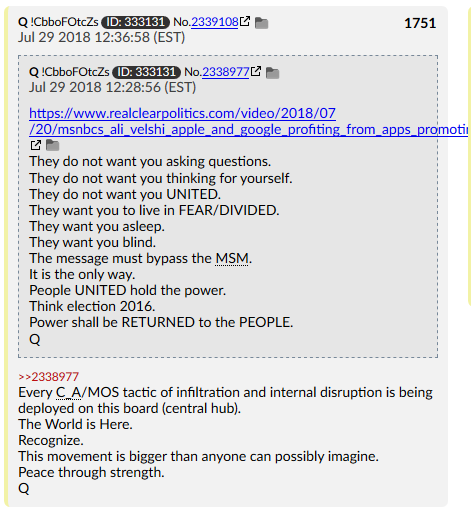 “We have to bypass the media in order to get straight to the people.”
“We’ve gone around them like no one in history has gone around them.”
-POTUS @ tonight’s rally
Think MSM attacks re: Q (We, the People).
Q

According to an outside lawyer I trust, CDC meeting to add COVID shots to childhood vaccine list will trigger some state requirements to attend schools and play sports. Will also give liability protection to manufacturers. Public can comment at this link:https://t.co/fbhC5GeZAY https://t.co/6CUHfSQIKm