Boris Johnson is tweeting just like Trump letting the establishment know that the BREXIT is happening and nothing can stop it. The 1977 Jim Carter law allows Trump sweeping powers to block China, Trump mentioned this on purpose. The [CB] says the trade wars is going to cause the recession. The [CB] shows their true colors, Trump points the finger at the Fed. The mystery of covfefe is now revealed.  Trump skips climate meeting, the UN leaks the real agenda behind the climate agenda. Trump wants Russia back in the G7, the [DS] responds. JW goes after Rep Omar. McCabe might be indicted. The US C_A and the Mexican C_A worked together. Iran reaches out, its happening. The movement was put into place on purpose, the people have the ultimate weapons now combat the [DS]. All pieces are now in place.

Jeremy Corbyn wants to cancel the referendum and argue about Brexit for years. I am committed to leading our country forward and getting Britain out of the EU by October 31st #LeaveOct31

Gold and silver moving up

The Federal Reserve loves watching our manufacturers struggle with their exports to the benefit of other parts of the world. Has anyone looked at what almost all other countries are doing to take advantage of the good old USA? Our Fed has been calling it wrong for too long!

The Patriots have done something that the DS and the MSM never saw coming. Think about the dS and the MSM they were in total control of the news or should I say propaganda and the DS was in total control over the governement and intelligence. The Alternative media and others on twitter, facebook, instagram , youtube and many other platforms started to research and counter the propaganda. Prior to and During the 2016 election the big tech/ds shadow banned or banned channels, accounts trying to limit the amount of information. this backfired, because the MSM/DS believed that nobody was listening or following, the number of views or subscribers were supressed, but this was very misleading and it worked against them, and in 2016 Trump was elected. Since the election a new movement was born it is  called Q anon, QAnon is a United States Military Intelligence operation. QAnon is not a single person, but a team of high-ranking persons with “Q” level security clearance. Why is this movement so important, how did it arm the people,    we will be discussing this a little later in this report, but first tiffany fitzhenry did a little research on the word covfefe

UNREAL: Google Buried True Meaning of Covfefe [I Will Stand Up] Once President Trump Tweeted It!!!

TOP BOMBSHELLS OF THE GOOGLE LEAK

On May 31, 2017, after returning from Saudi Arabia, Trump tweeted this: pic.twitter.com/6bcvXZzIX6

6 hours later he tweeted this: pic.twitter.com/GIkTo15qyO

Leaked documents, titled ‘covfefe Translate Easter egg,’ reveal how Google raced to scrub the Arabic word “covfefe” and it’s meaning “I will stand up.” According to the document they knew the meaning of the Arabic word. Despite that, they set out to replace it with a shrug emoji. pic.twitter.com/Cvc3frJWA4 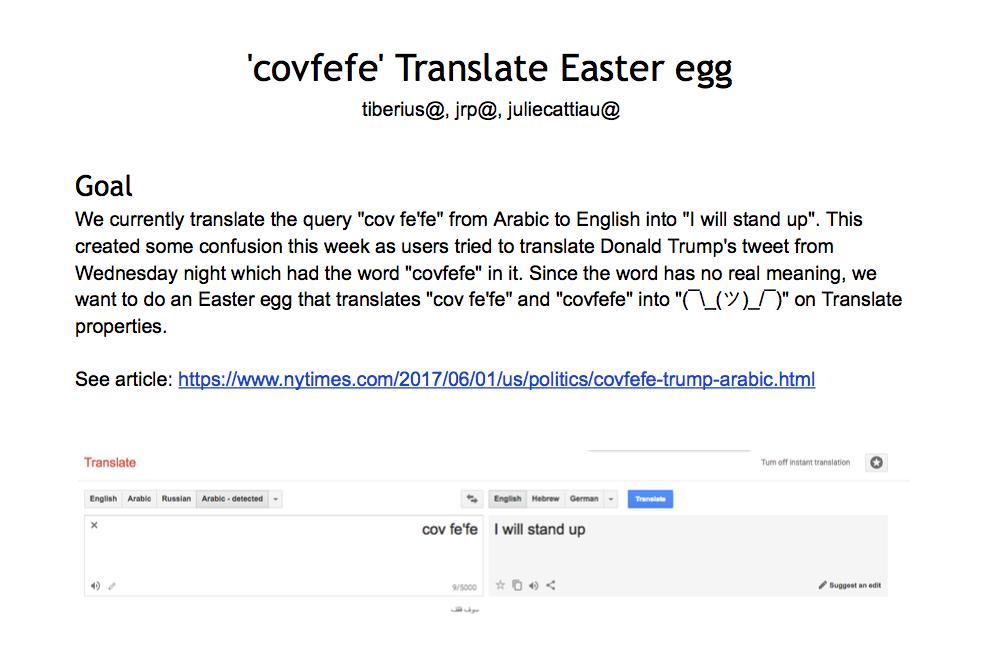 So, just to be crystal clear, Google has no problem whatsoever taking it upon themselves to alter a centuries old language – deleting an entire word and it’s meaning from virtual existence – in order to carry out a completely unstated, hidden political agenda.

Further documents also reveal that the team raced to ‘bad the misspellings’ as well (see below document), in essence ensuring that anyone searching Google to try and figure out what covfefe meant would never find the truth, no matter what. No matter how they searched. pic.twitter.com/aeUVqqR3AV 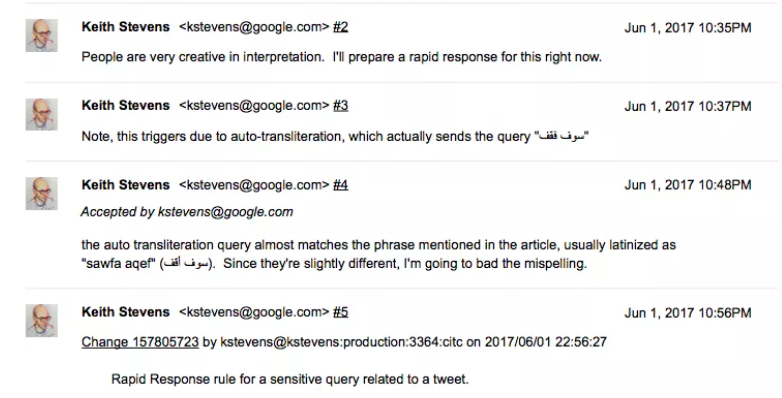 By removing the word covfefe, Google willfully defrauded the American public. They weaponized language information meant to be available to all humans, mass manipulated thought, political opinions and reality itself.

All in real time.

Sit with that. Think of the implications..

The team name itself, ‘derrida-team’ foolishly gives away their intentions. Derrida for those who don’t know, was a post modern philosopher who wrote at lengths about how to carry out the destruction of western civilization; these are the heros of Google’s foot soldiers. pic.twitter.com/PnGlCFRrMh 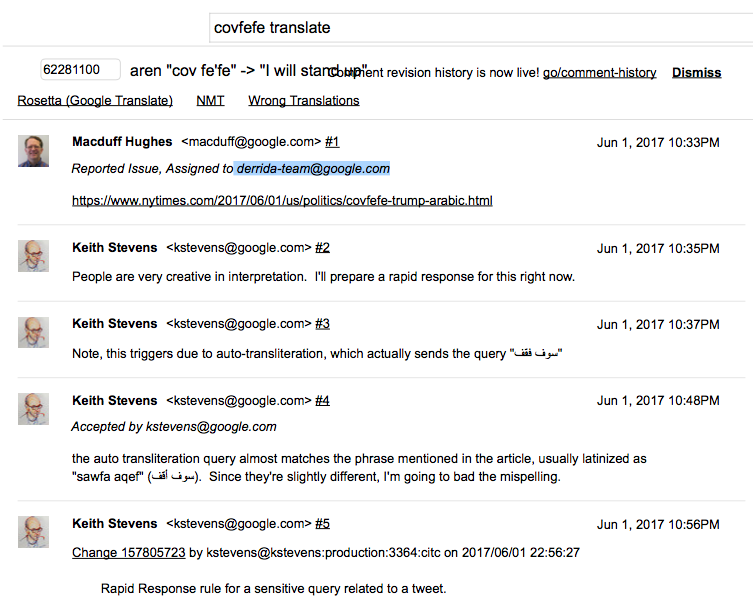 At the G7 summit Trump decided to skip the climate meeting

And then we have this from a UN official

“This is probably the most difficult task we have ever given ourselves, which is to intentionally transform the economic development model for the first time in human history.”

Read climate throughout the years

Just returned to Washington from France and the very successful G-7, only to find that the Fake News is still trying to perpetuate the phony story that I wanted to use Nuclear weapons to blow up hurricanes before they reach shore. This is so ridiculous, never happened!

The DS they are panicking, Trump just meant with leaders at the G7 didn’t attend the climate meeting, did not sign the hate speech agreement, Trump made bilaterial deal with Japan, working on a deal with China, wants Russia back in the G7 ,change is here and the DS knows it, Brennan is panicking

Brennan: World Leaders Realize Trump Is ‘Way Out of His Depth,’ ‘Delusional’

Why is Brennan and top Dems so worried, because once Trump and Putin show the world they both can get along the entire Russian narrative falls apart, the regime change in Ukraine exposed, Syria exposed Russian interference in elections completely disappears and then everyone starts to ask the question if Russia didn’t do this who did, the finger then is redirected to the DS

Lets move onto JE, the investigation has not ended actually it has accelerated and more and more information is coming out.

Source: thesun.co.uk
During JE murder/suicide the cameras were reported to malfunction and now it seems the footage was messed with to make it unusable, just a coincidence.

Here is Black and White Newspaper Evidence (from 1989) that Ghislaine Maxwell’s father and the Bronfman family were business partners, trying to buy up media.

JW is on it again, they released 79 pages of justice department documents.

BREAKING: Federal Prosecutors in Final Stages of Deciding on Whether to Indict Andrew McCabe

And then we have this, tom fitton tweeted out the following

Confirmation that FBI/CIA had yet another spy (Felix Sater) targeting @realDonaldTrump. “Into the spring of 2016,” the Mueller Report notes, “Sater and Cohen continued to discuss a trip to Moscow.” https://t.co/pM548IRKZDhttps://t.co/I7pfEVXcRv

Lets head down to the border, since the MSM continually pushes that the wall is not being built

***BREAKING*** News being reported out of Mexico, multiple sources about an alleged “extortion network” operated by CISEN (Mexican CIA), the American CIA under Obama, and former Mexico President Enrique Peña Nieto. The story is trending in Mexico right now. I will post more soon.

Now we know that JS and RG have pointing the finger at Ukraine, this involves HRC, Biden, Biden’s son Hunter and John Kerry and many others. We have just learned that

What does this tell you, Iran is ready to negotiate, it seems that we are following the same path as NK, remove the sanctions and we will talk, this didn’t happen and Trump and Kim Jong Un created a peace deal. the samething is about to happen with Iran, Iran just reached out to Trump

In the beginning of the report we talked about why this movement is so important.

Q and the patriots knew that the MSM uses millions of dollars to spread propaganda. 7 companies control the news,the DS and intelligence orgs supply propaganda to the MSM networks and they spread it to the people. How do you combat this without having millions of dollars, you create an online research team around the country/world, you have thousands of people working to find facts.

Q/Patriots knew that the ultimate weapon was going to be knowledge, facts, this is the only way to beat the MSM and the DS information war, we needed information, knowledge facts  to counter what they were telling the world

Timing is important, while Trump/Patriots were draining the swamp the anons were growing in numbers and knowledge, to do all this it takes time.

Think about why this is needed, lets take deep fakes for example, Q /Patriots knew that the MSM/DS were going to use Deep fakes as a defensive move when videos are produced of certain individuals. Have you noticed that in the last couple of weeks we see more and more deep fakes showing how you can morf people into someone else, they are doing this to get ahead of the story

The weapon we have is truth, facts, this will be used combat the propaganda on big tech platforms.

2 thoughts on “What We Have Been Waiting For Is Coming, We Have The Ultimate Weapon – Episode 1954”