Ep 2701a – The People See Inflation, Supply Chain, Failing Economy, And Now..
The [CB] & the Biden administration are destroying the economy, the people are watching just like they watch everything else that is going on. Now those same people who shut down the economy during the pandemic are at it again. The [DS] is panicking, Durham released more information, it all points to [HRC], Obama and all the way up the chain. Trump caught them all, they committed treason and Durham is getting to the bottom of it. The panic is real the war they are starting is fake. The plan is working and the information is dripping out, be alert [FF] incoming. More pain is on the way. 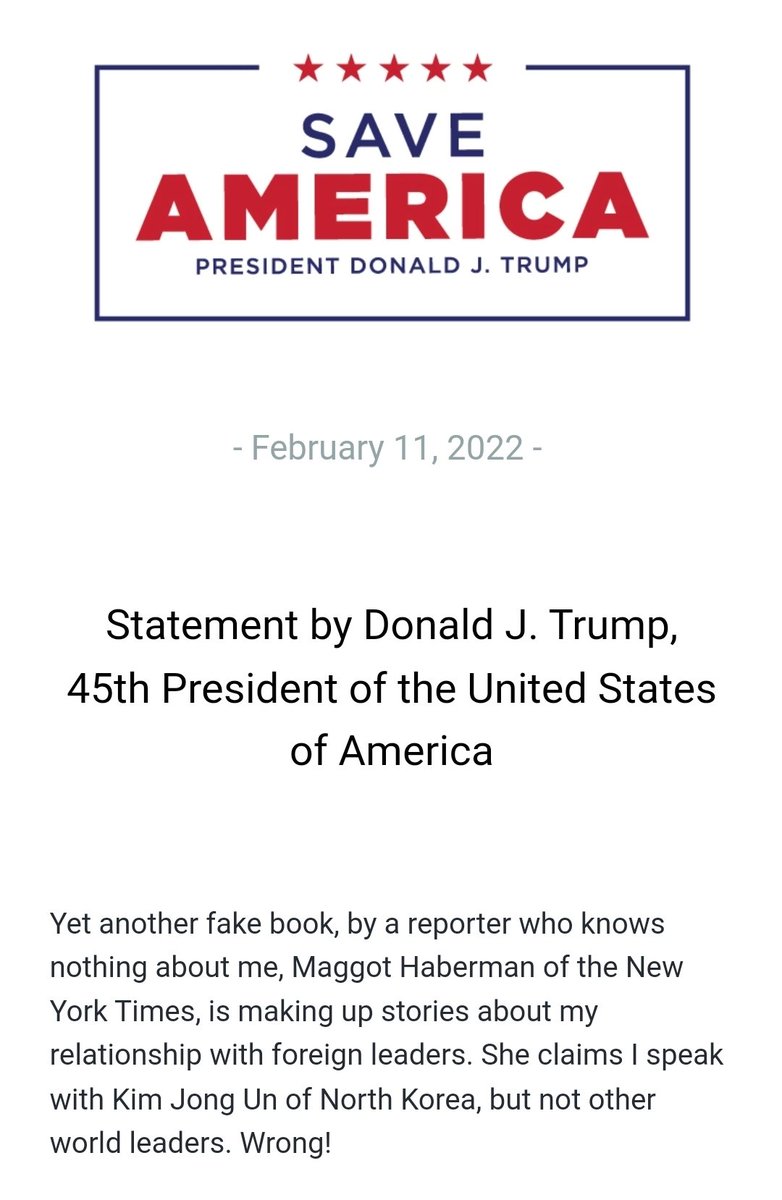 The Canadian police have begun an operation to forcibly remove freedom truckers from impeding through traffic, particularly on the Ambassador Bridge.

The Windsor Police & its policing partners have commenced enforcement at and near the Ambassador Bridge. We urge all demonstrators to act lawfully & peacefully. Commuters are still being asked to avoid the areas affected by the demonstrations at this time.

The court ordered injunction at the Ambassador Bridge has kicked in and there’s more protestors here now than at any other point this week. They’re streaming in by the dozens. It’s hard to see police stepping in at this hour with so many people here celebrating, and carrying on. pic.twitter.com/8VrWD7ersw

Police surrounded the protesters front and back. Large police armoured personnel carrier has been brought up in the distance. Snipers on the roof of customs building. pic.twitter.com/sI295G7hUV

Every time they got something completely wrong about COVID, they told you “science changes,” but with respect to climate change they will tell you “the science is settled!”

Over the past two years, on a weekly basis, Bancel has dumped Moderna stock. He's now cashed out hundreds of millions of dollars. He's sold about $20 million worth of shares in 2022.

Wait until it finally dawns on enough Americans that they destroyed the value of their own dollar and funded the creation of something that sterilized them and wrecked their hearts.

Then were forced by The System to take it as its creators retire with billions and disappear.

If you think the same corrupt interests who pulled off Spy/FISA/Russiagate didn’t also pull off a 4-hour disturbance at the Capitol on January 6…think again.

I stand by my prediction that when we learn the truth about J6, it will make Russiagate look like a kindergarten play; https://t.co/jKoIHzVArP 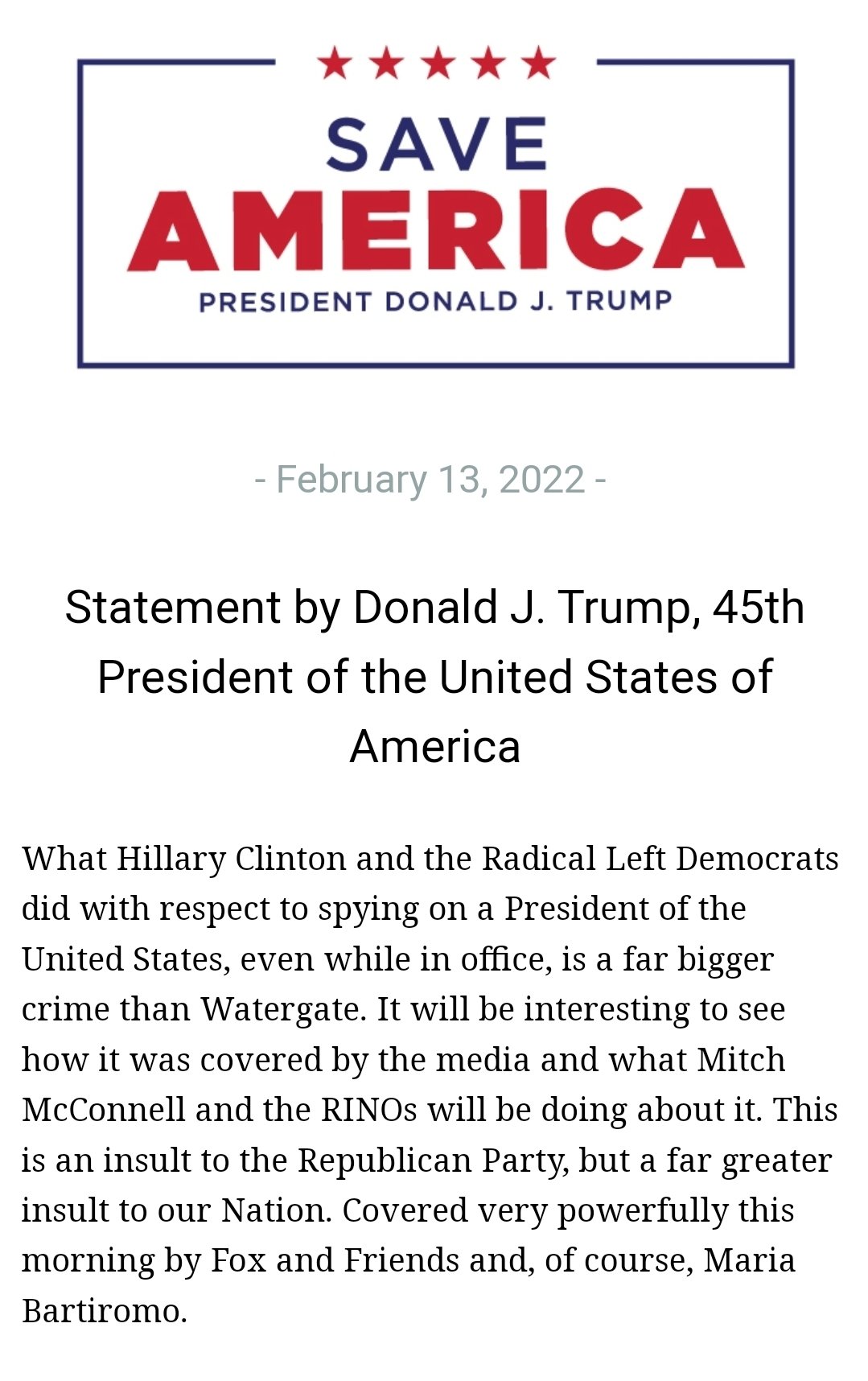 What if Crowdstrike was a patsy, there to unknowingly reach false conclusions of a “Russian hack” based on fraudulent information provided to them by Rodney Joffe and Perkins Coie and the DNC/Hillary Campaign?

BREAKING: Donald Trump and the RNC funded SIGINT collection AGAINST the Executive Office of the President of the United States, just like the Russians do. This is TREASON!

Just kidding, it was Hillary Clinton and a big tech executive. Durham is coming.

They spied on Donald Trump as sitting President of the United States.

If true, the only thing more outrageous than this is the number of people who fell for the Trump-Russia collusion narrative. This includes the vast majority of professional journalists.

And if they didn’t fall for it, they knowingly lied. https://t.co/Lm0zIDSrzv

(a)Whoever knowingly and willfully communicates, furnishes, transmits, or otherwise makes available to an unauthorized person, or publishes, or uses in any manner prejudicial to the safety or interest of the United States or for the benefit of any foreign government to the detriment of the United States any classified information—

Political opponents spied on a sitting President (Trump) of the United States of America, in THE WHITE HOUSE… https://t.co/Dk5pw5zeYY

Imagine that, yet another “Trump Conspiracy Theory” that Trump was 100% right about. Why are all the conspiracies totally on point 6 months after media pretends they’re not? Remember the outrage when DJT said they were spying on him… well it turns out they were and now crickets!

Yep. You sure did. https://t.co/qBRJYUenWe 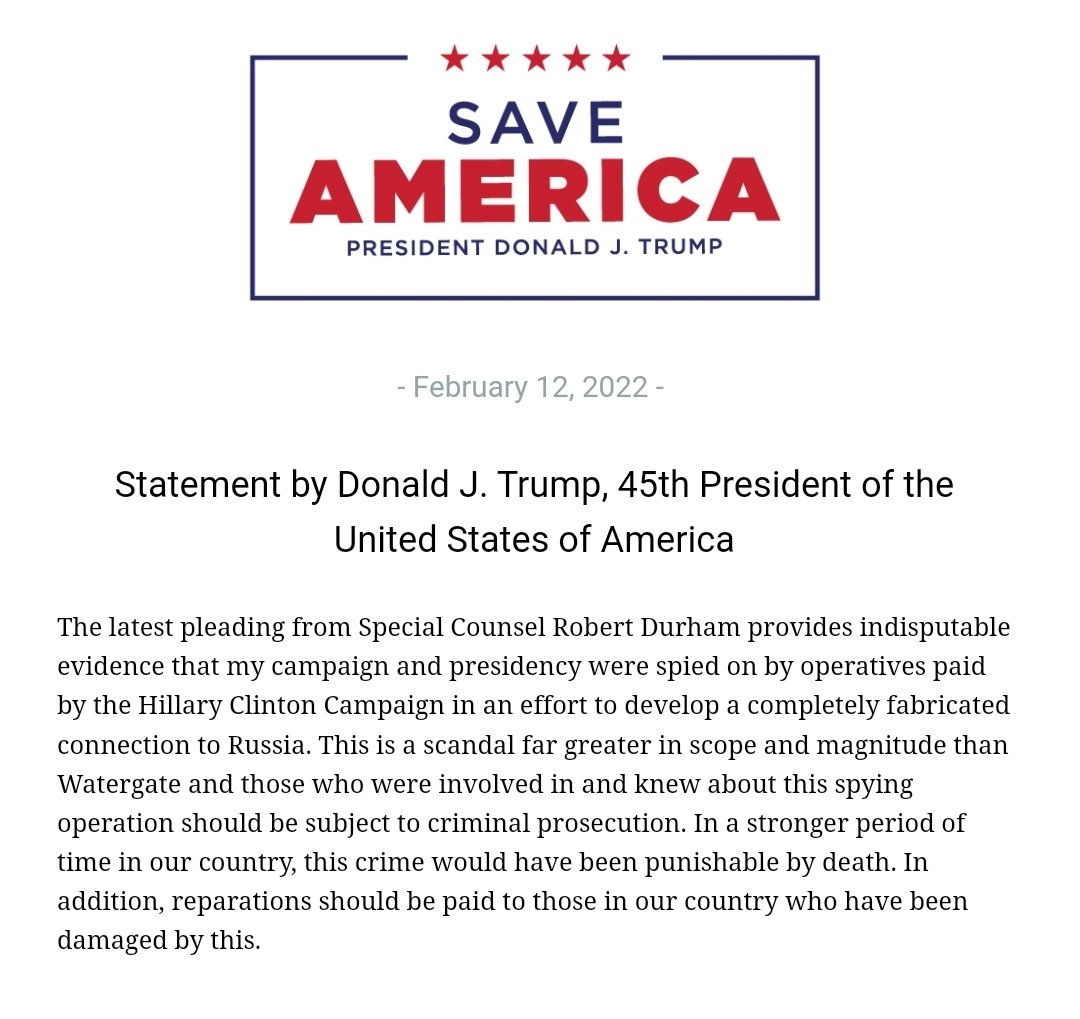 Bill Barr is fighting to hold the FBI accountable for lying to the FISA Court SEVENTEEN times.

No mercy.
No bargaining.
A Traitor’s justice.
P-A-I-N
Q

Be alert next 10 days.
FF attempts may be carried out in attempt to change narrative (neg optics).
High possibility of ‘multiple day’ coverage event forcing pause on news.
See something > Say something.
Q

And now you’re finding out why… https://t.co/QEJU5tIMiL

Reminder: Ratcliffe stepped down as DNI when the Biden administration took power. So this handoff of 1000 intelligence documents to Durham happened well in advance of January 20, 2021.

#BREAKING The internet infrastructure is under attack, the agency that oversees the online address book warns.