Ep 2596a – [CB]/[JB] Own The Economic Disaster, No Escape
The job numbers are in and they are horrible, the people can see who is responsible. There is no escaping this, as the economy falls apart the blame will be on the [CB]/[JB]. Biden blames the people for the poor job numbers. The R’s voting to raise the debt ceiling, big fail, Trump warned them not too. Supply chain and inflation is coming and [JB] will be to blame. The [DS] planned a color revolution and it has not ended. They are now pushing the next phase because the forensic audits & Durham are moving forward, nothing can stop this. The [DS] understands this, the next phase will to continue with the riots and blame it on Trump and his supporters. The narrative is already being built, censorship is in place. The patriots know the playbook, they know what they are attempting, this is why the counterinsurgency has been built, the military was the only way forward.

Senate Minority Leader Mitch McConnell on Wednesday caved to Joe Biden and said he would agree to a debt limit increase through December. 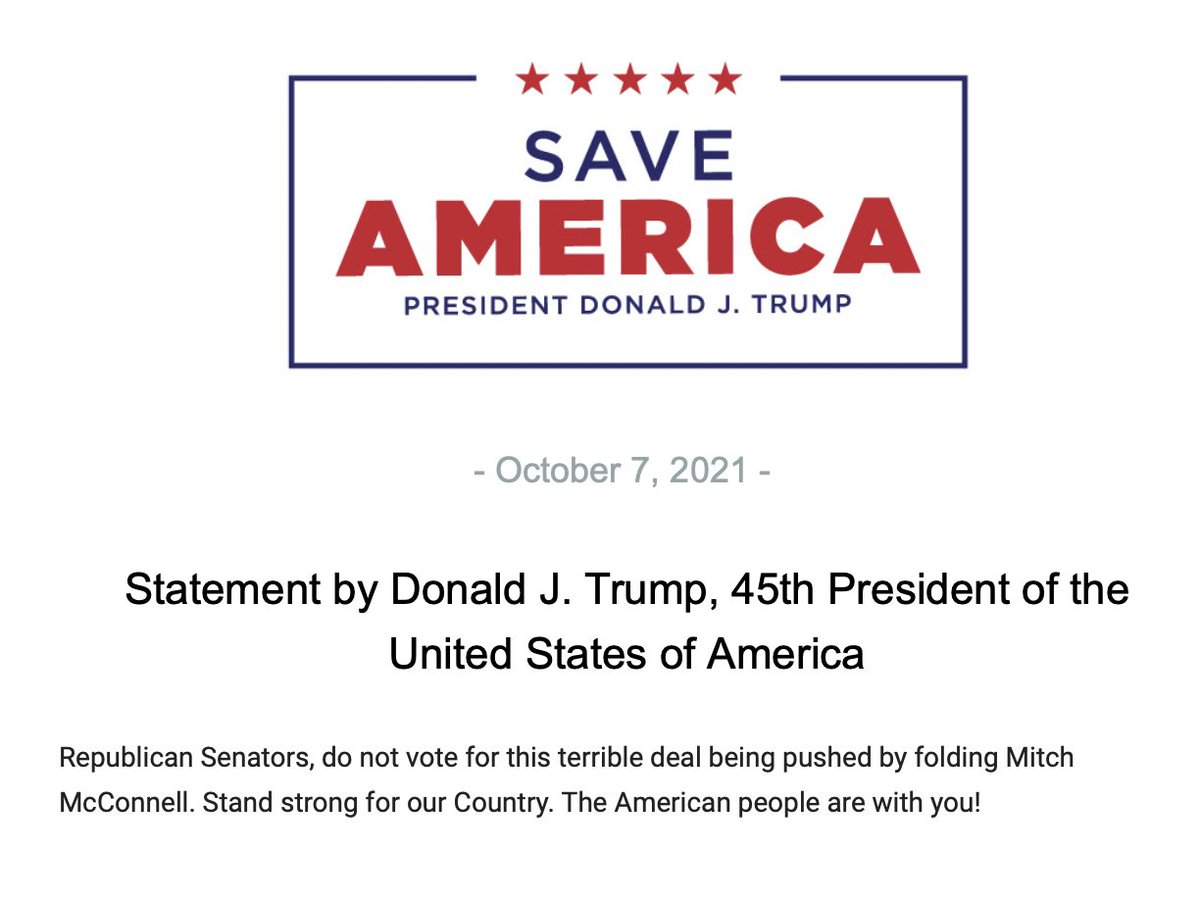 UK meat consumption falls by nearly a fifth in the last decade, as scientists warn reduction must be faster to hit climate target

Gallup: Trust In The Media Sinks to 36 Percent, Second Lowest Ever

Can the mistrust of the media get much greater? Gallup pollsters reported on Thursday that American trust in the media “to report the news fully, accurately and fairly has edged down four percentage points since last year to 36 percent, making this year’s reading the second lowest in Gallup’s trend.”

Overall, just seven percent of U.S. adults say they have “a great deal” and 29 percent “a fair amount” of trust and confidence in newspapers, television and radio news reporting — which, combined, is four points above the 32 percent record low in 2016, during the Donald Trump vs. Hillary Clinton battle.

More than half of respondents sound fed up: 29 percent of the public currently registers “not very much” trust and 34 percent say they have “none at all.”

Lmao. The only take away from this filing is that Sussmann is nervous AF because his lawyers aren’t really sure who is cooperating (ie does mook have a deal, who else besides Baker is talking), and how much Durham knows (ie just Alfa bank or is this going to G2 too)😉 https://t.co/iPcWEb26Pz

People who waved a flag in the Capitol are being indefinitely detained, while a school shooter walks free.

The New York Times reported  that they had overstated the number of children hospitalized with coronavirus by 800,000!
They also misreported on Denmark and Sweden’s recent move to ban the vaccines from those under 30-years-old.

Seems to me they went to 99% because they fired the people who weren’t vaxed.

It’s not that hard, unless you’re a moron… https://t.co/U1YhSMpwZO

New COVID-19 cases for children ages 5-17 – the vast majority of the school-aged population – have decreased 79% in the month of September, in the 54 Florida counties where school districts have no masking policy or are following state law by honoring the parental opt-out rule.

For comparison, COVID-19 cases for children 5-17 in the 13 districts that imposed forced-masking in schools have decreased 77%, on average.

Less than .0006 percent of the child population in this country has died of COVID over the last two years. Less than 1 percent of all child deaths during that period are attributed to COVID. There is no pandemic for our kids. There never has been. It’s all a lie.

ICELAND STOPS USE OF MODERNA VACCINE These vaccines are not safe for everyone. They should only be prescribed by your physician in accordance to your individual health and body autonomy. Mandatory mRNA VAX is dangerous and unethical.

REVEALED: Letter with Insider Information Shows the Teachers Union, AG Merrick Garland and the FBI’s Plan to Monitor Parents was a Political Setup for Midterms

** Key Biden Administration stakeholders, including the National Education Association, the American Federation of Teachers, and others, have combined to oppress, threaten, and intimidate parents to chill and prevent them from exercising the rights or privileges secured by the Constitution.5 To date these efforts, though extensive, have generally proven ineffectual.

The group came up with a plan to chill and deter American parents of school children from speaking out.

** Upon information and belief, at the express direction of or with the express consent of Jane Doe #1, Jane Doe #2 and other Biden Administration officials developed a plan to use a letter from an outside group (“not the usual suspects”) as pretext for federal action to chill, deter, and discourage parents from exercising their constitutional rights and privileges.

The liberal group then drafted and released a letter urging the government to use the Patriot Act to spy on American parents of school children.

** On or about September 29, citing legal authorities including the Patriot Act, the “National School Boards Association” made public a letter demanding federal action against parents citing authorities including the Patriot Act. The justification for federal action included, inter alia, parents were “posting watchlists against school boards and spreading misinformation (sic) that boards are adopting critical race theory curriculum and working to maintain online learning by haphazardly attributing it to COVID-19.”6 It is not yet clear whether and to what extent drafts of this letter were shared with Biden Administration officials, including Jane Doe #1 and Jane Doe #2, and whether changes were suggested or made by them, prior to the ostensible public release date.

Allies of former President Trump have missed a deadline to submit docs to Jan 6 Select House Committee. The next step could be a fight over executive privilege. Worth revisiting early DoD timeline which investigators can challenge/confirm through depositions or open testimony. https://t.co/Rc8CXZU2yG

At this point in our investigation, we can say that, without a doubt, Donald Trump’s efforts to spread his “Big Lie” and undermine the results of the election helped incite almost 1,000 Americans to breach the Capitol in a violent insurrection on January 6, 2021.